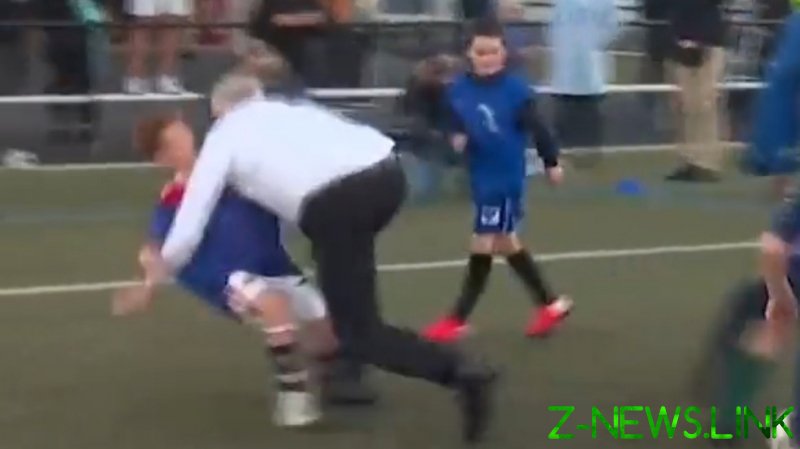 Australian Prime Minister Scott Morrison has been criticized for accidentally crashing into an eight-year-old boy during a football match while on the campaign trail.

Morrison was taking part in a training game at the Devenport Strikers Football Club in Tasmania when he lost control while trying to enter the action and collided with the youngster, later named as Luca Fauvette.

“A bit of a rugby tackle,” Morrison said as he helped Luca get back on his feet.

While Luca appeared unfazed by Morrison’s sloppy tackle and managed to brush himself off before he resumed the game, Morrison was clearly concerned by later asking: “Where’s Luca?” and adding: “Hope he’s not in hospital!”

“I look forward to coming back on another occasion,” Morrison also said. “I think that when that grandstand comes down, I hear it might need a bit of a bulldozer to knock it down, so I might be able to help with that,” he joked.

Later on Facebook, Morrison revealed that he had spoken to the youngster and his mother to check if he was in “good form”.

“A shout out to young Luca for being such a good sport,” Morrison wrote.

On Twitter, however, the Liberal Party head was heavily criticized by users who also said it reminded them of a horror slide tackle by British counterpart Boris Johnson during a charity football match in 2006 and another incident when he knocked over a 10-year-old boy when playing rugby in Tokyo in 2015.

“What the actual f*ck?” someone asked. “As a primary school teacher, I’d probably be suspended if I did that! He’s a big heavy man. That is dangerous. He’s from another planet.”

“Exhibiting his usual standard of care for Australians,” was a separate conclusion.

“It’s just so creepy,” began another critique. “I’m a mum, so if a random guy, who I didn’t know, rocked up to my kid’s game and started playing, knocked my kid over and gave my child a hug at the end, I would be really upset and be asking questions. It is wrong on every level.”

“Accidentally?” it was also asked. “Most commonsense adults know to take care when playing with small children.”

“I just don’t really understand why the Prime Minister is running around playing sport with little kids to be honest,” admitted Sky News Australia’s Political Editor.

Australia’s General Election is set to get underway on May 21 when Morrison will try to win a fourth consecutive term as his country’s leader.