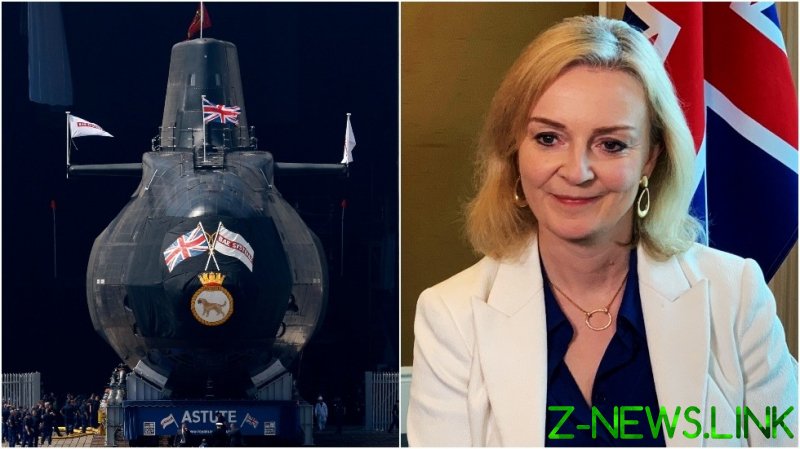 Truss, who was promoted to foreign secretary after a government reshuffle earlier this month, was trying to justify the need for Britain’s participation in the highly controversial AUKUS agreement in a dedicated article in the Sunday Telegraph.

“Freedoms need to be defended, so we are also building strong security ties around the world,” she wrote, explaining the reasoning behind London’s participation in the trilateral deal.

According to the pact, announced by the US, UK and Australian leaders on Wednesday, the sides will work together to provide Canberra with a fleet of state-of-the-art nuclear-powered submarines, armed with conventional weapons.

The new deal led to Australia abandoning an earlier $66 billion contract with France for diesel-electric submarines, causing outrage in Paris, which labelled it a “stab in the back” and recalled its ambassadors for consultation from Canberra and Washington.

AUKUS is seen by some as a tool to limit China’s growing influence in the Indo-Pacific region, so Beijing was also critical of the agreement and accused its signatories of having a “Cold War mentality.”

Truss said that London’s participation in the deal was “about more than foreign policy in the abstract, but delivering for people across the UK.”

The pact with the US and Australia “will not just make us safer at home, it could also create hundreds of new and high-skilled jobs, from the shipyards of Govan to the factories of Tyneside,” she claimed.

Truss didn’t mention France directly in her article, but it came out hours after French Foreign Minister Jean-Yves Le Drian made diminishing comments about London’s role in the AUKUS initiative.

He explained that Paris recalled its envoys from Washington and Canberra, but not from London, because “we know [the UK’s] constant opportunism, so there’s no use in having our ambassador [in Britain] come to explain that to us.” He also insisted that Britain was “quite the spare tyre” for the pact.