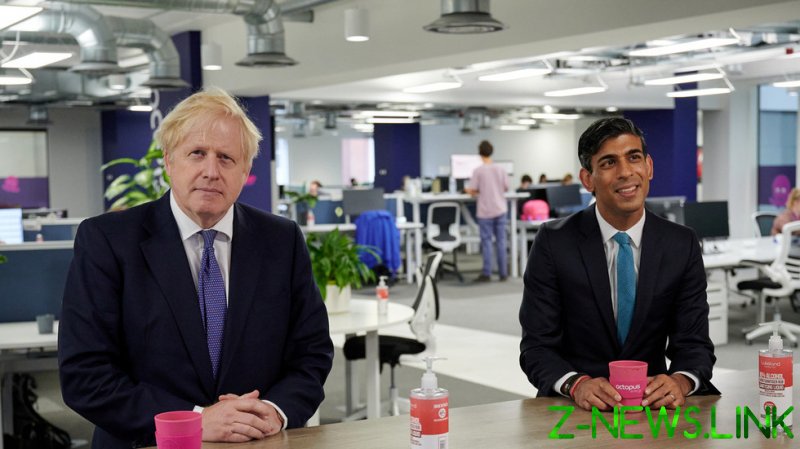 The prime minister’s horror show pandemic continues, as he was forced into a Fast & Furious-style handbrake turn – alongside Chancellor Rishi Sunak – over taking part in a Covid-19 pilot scheme that allows people to avoid self-isolation even after they come in contact with someone infected by the virus.

While nobody is pointing fingers at anyone, those high-level tete-a-tetes with Health Secretary Sajid Javid are probably responsible, after he announced on social media yesterday that he’d caught Covid-19 and was feeling “groggy.”

Javid’s video on Twitter is a nice touch, but maybe a few filters and a backing track (Elton John’s ‘I’m Still Standing’, maybe) would boost his Likes and Subscribes. Memo: Comms team. Ideas for the 9am teams meet tomorrow.

Under the exemption, the PM and his chancellor could work as normal but would need to take daily tests as part of a trial being run in 20 public sector organisations including government departments. It’s a long way from the self-isolation that the rest of the population must endure, no matter how inconvenient, costly, or damaging it might be.

That decision lasted 180 minutes, at which point the pair realised how this might look to the hundreds of thousands of people suddenly plunged into self-isolation after being rounded up in the test and trace ‘pingdemic’.

Having played their ‘Get Out of Jail’ cards, the pair U-turned, with Sunak tweeting this morning: “Whilst the test and trace pilot is fairly restrictive, allowing only essential government business, I recognise that even the sense that the rules aren’t the same for everyone is wrong.”

When Boris Johnson emerged from hospital last April after an up-close-and-personal encounter with Covid-19 that could have killed him, he looked like a changed man: sober, grateful, and shocked by the impact of a virus he had apparently dismissed earlier in the pandemic as “a scare story.”

Because of that brush with death, his enthusiasm for tomorrow as ‘freedom day’ was something the public bought into – and with the weather onside, school holidays already underway for some, and 53 percent of the population double-jabbed, the expectations for a rapid return to something ‘normal’ were growing.

The PM realised, however – maybe thanks to the more cautious public health officials – that he had some expectation management to do. ‘Freedom’, it now appears, means wearing a face mask in enclosed public places and maybe even showing a Covid-19 test to enter a pub or restaurant. What’s ‘free’ about that?

Even if we can go outside, self-isolating permitting, we can’t go very far. The usual holiday destinations are no-go zones, where the English are either not welcome thanks to the Delta variant or forbidden to travel to by our own government anyway.

The coronavirus has taken nearly 130,000 lives in the UK, and our infection rate of 5.39 million cases is the third highest in the world, but the full extent of the damage to the national psyche is still to be measured.

We can see the impact of the pandemic on the mental wellbeing of our children and loved ones. On our economy, on the way we work and play. The one thing that has kept us grounded is the fact that we are all in this together.

But this is actually a delusion. Those in positions of privilege and power can manipulate the rules so they don’t feel the pain like the rest of us. But now that we all realise this, there’s a very real risk of ordinary people choosing to ignore any future advice to play by the rules with the justification, “Why should we? They don’t.”

The PM and chancellor might be powerful and entitled men, but as they quickly realised this morning, they are stuck playing by the rules of the Covid game just like the rest of us. That might suck, but that’s the way it’s going to be until this thing is gone.