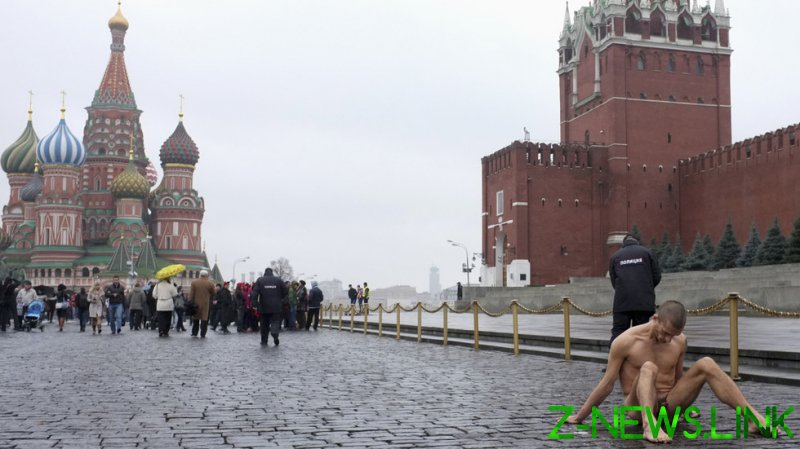 Emergency services were called to the scene late on Monday night, law enforcement told RIA Novosti. Officers detained the 24-year-old and he has since reportedly been referred for a psychological assessment.

According to the source, when police approached him, they saw that he was armed with a hammer and screws.

The suspect had allegedly traveled some 20 kilometers (12 miles) from his town of Dolgoprudny, got undressed, and intended to nail his reproductive organs to the paving stones. However, fortunately, authorities intervened before he was able to finish the act.

When questioned about his motives, the detainee said he had performed a mysterious ritual at home and received instructions to carry out the task from spirits, who ordered him to go to the Kremlin and nail his genitals to the ground.

A report for petty hooliganism was drawn up against the man, and he could face up to 15 days behind bars.

The bizarre attempt, however, is surprisingly not unique. In 2013, Petr Pavlensky, an artist hailing from St. Petersburg, nailed his scrotum to Red Square, just meters away from the marble tomb of Communist revolutionary Vladimir Lenin.

Pavlensky, a highly controversial figure in Russia, has staged several ballsy stunts, including wrapping his half-naked body in barbed wire and sewing his lips shut in protest against government policies. The artist was also detained after setting fire to a door of the country’s security service headquarters.