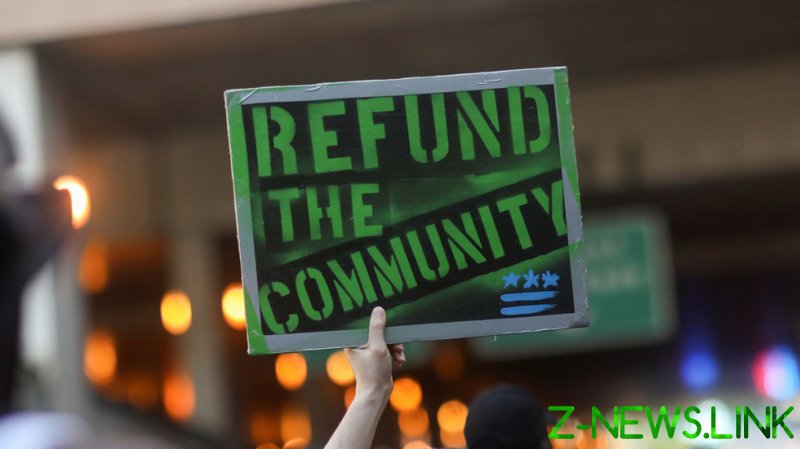 The room, dubbed “Is Clubhouse Obsessed with ‘Wokeism’?” was created by independent journalist Michael Tracey, who said he thought the Clubhouse chats “almost inevitably evolve into a discussion of ‘woke-ism’… but there’s seldom anyone in the room who identifies enough with the ideology to give a defense of it.”

His attempt to create a safe space for a civil discourse and let both ‘woke’ and ‘anti-woke’ understand each other better was successful at first, with Tracey tweeting that it expanded into a “large multi-racial discussion.” Little did he know that the title of the room was more like a foreshadowing of things to come.

Helping Tracey moderate the discussion was a black man called George, who appeared to be doing a decent job at maintaining an orderly list of speakers while trying to enable both sides “push back” against each other’s arguments. However, George left at some point while the queue of the wannabe speakers grew increasingly longer and frustrated they couldn’t vent their grievances – especially those on the “woke” side. A black woman called “Brooklyn” somehow ended up being a moderator – which, thanks to the Clubhouse rules, enabled her to boot Tracey from his own chatroom and mute him.

A five-hour-long recording of the discussion, which took place on February 26, resurfaced on social media on Monday – and some time after the two-hour mark it descends into pure mayhem.

The self-appointed leader of the discussion pronounced that the white people BS was over, sending “all the Caucasians to the back” of the line and scolding the “f****g delusional” white participants for making use of the term ‘woke’ and its variations.

“Don’t use the word ‘wokeism,’ don’t use ‘woke,’ don’t use any of our dialect, it’s not for you,” she declared, adding that she didn’t “even understand why you let that white man in here with that b******t.”

Several others loudly cheered ‘Brooklyn’ and a string of pretty one-sided BLM-themed tirades followed for nearly an hour – before the new moderator decided to bring in the attending professor Bret Weinstein in for a kill.

Weinstein was on the defensive as soon as he took the stage, having to explain his work in evolutionary biology as one of the women controlling the discussion repeatedly insisted that the discipline was the “same thing” as eugenics.

‘Brooklyn’ and others would barely let Weinstein get a word in edgewise, deliberately misinterpreting the few utterances he was able to make. His declaration that he was 100 percent anti-racist, for example, was deliberately flipped to 100 percent anti-black, and his inability to answer multiple questions at once made his inquisitors impatient.

“Give us the answers now and quickly or you’re gonna get off the stage,” the woman snarled, later urging her companions to “stop letting this man wiggle out of answering the questions.” He was also accused of being an investor in the Clubhouse platform, which currently operates on an invite-only basis in a series of Zoom-like ‘rooms’ but with audio only.

He attempted to explain that his aims in studying evolutionary biology were to “recognize [racism and genocide] emerge out of evolution… what we can do about it” and denying the discipline was a “means to spread scientific transphobia” – only to have his words turned against him in a rather bizarre fashion.

“You’re a scientist and you use anecdotal experience to justify your view on pronouns,” another man on the chat said accusingly. “Just because someone has only ever eaten hotdogs doesn’t mean hamburgers don’t exist, and if hamburgers can see your statements, then why are you making them?”

Weinstein did make an attempt to dodge the allegations of “whiteness” that dominated the proceedings – clearly sensing that being of a Caucasian disposition in such a climate was borderline criminal. He protested that he was Jewish, claiming it’s “a different thing” and reminding that the Jews have too been persecuted – only for one of his interlocutors to correct him.

Weinstein was finally chased off stage as he attempted to turn the trainwreck into a civilized debate. “We can have a disagreement—” he began, only for several of the others to start talking over him.

“You’re going to have to go to the audience and you need to cash out everybody up here $1,000 before you coming back up,” ‘Brooklyn’ smugly declared. Another man insisted that after the group had done Weinstein the favor of “letting him” speak, he had merely proven himself a “white supremist [sic]”  by “spewing” white supremacist talking points. He did not say what those talking points were. The professor was then apparently forcibly muted by the moderators.

Weinstein was famously run out of Evergreen College by a mob of angry students in 2017, after questioning the need for a ‘Day of Absence’ in which white students would be banned from campus – the flip-side of a longstanding protest by black students in which they stayed home to call attention to their significance on campus.