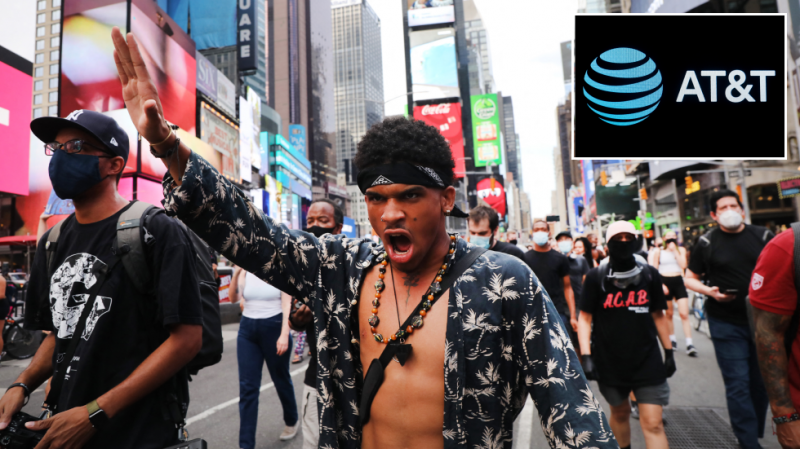 The explosive claim comes from Christopher Rufo, a prominent opponent of critical race theory (CRT) and its increasing acceptance as the basis for fighting racial injustices in the US. CRT views US society as inherently racist and beneficial to white people, including those who are not consciously racist themselves. Advocates say the situation can only be fixed if white people are taught about their privileges and start to actively fight against systemic racism.

According to a ‘senior employee’ at AT&T, cited by Rufo, the company’s equity and diversity policies have embraced that viewpoint and require white employees to adhere to it. Participation in programs that are supposed to address race inequality is mandatory at AT&T, the source claimed.

Those who would not “confess their complicity in ‘white privilege’ and ‘systemic racism,’” get punished by getting lower rankings on performance reviews, according to the source. There is also a shaming aspect to the alleged coercion, with people failing to pledge their intention to be a better ally reportedly branded racists.

Rufo didn’t offer any proof of the purported pressure campaign, but posted some materials related to AT&T’s program called ‘Listen. Understand. Act.’ The initiative is supposed to promote respectful conversations about race among company employees, helping them overcome toxic partisan divisions on race issues that have been gripping the US lately.

Some of the reading materials suggested to AT&T staff for education about race, as shown by Rufo, appear to be what one would expect from a CRT-inspired program. One May 2020 article by Chicago Tribune columnist Dahleen Glanton accused white people of easily getting over incidents like the murder of George Floyd. “You drift back into oblivion, convinced there’s nothing you can do about racist cops or the racist society that breeds them. But you are wrong. White people, you are the problem,” she wrote.

Another suggested read was penned by Andres Tapia, a global diversity and inclusion strategist at Korn Ferry. It suggested that the fear and uncertainty that some white people felt due to the Covid-19 pandemic gives them an insight into how black people feel constantly.

Ironically, it celebrates the idea that after the 2020 Black Lives Matter protests, “corporate America has noticed” racial injustices in the US. “I have never seen companies act so fast to donate millions to Black causes, make commitments to buy goods from Black-owned businesses, proclaim their allegiance to racial justice in their ads, and even look in the mirror and figure out how to eliminate racism within their own organizations,” Ferry remarked.

AT&T, apparently, sees itself as belonging to that racially-conscious (or, arguably, virtue-signaling) part of corporate America. An April letter to employees sent by CEO John Stankey, the executive who launched ‘Listen. Understand. Act.’ last year, goes on at length about how diversity and racial justice are in the interest of the company he leads.

“Society functions best when we can collectively ‘find the center’ on issues,” he wrote, according to the text leaked to Rufo. “Doing so is very much in AT&T’s long-term interests and advocating for AT&T’s interests is in my job description.”

The company wouldn’t immediately comment on Rufo’s allegations that ‘finding the center’ requires white employees to confess their racism sins and pledge loyalty to the cause. The anti-CRT activist called on Stankey to scrap the diversity and inclusion ‘programming’ initiative, apologize to workers and develop a replacement “that does not vilify certain racial groups and promote divisive and destructive ideas.”