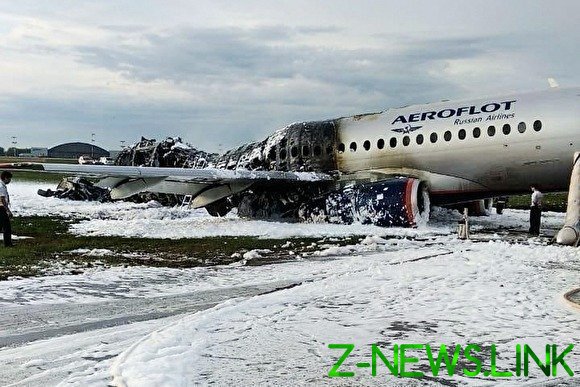 “In secret around the world — it’s about them. For which he paid”

The state Duma Deputy from the Sverdlovsk region Andrey Alshevskih said that at the request of a identified and punished by the police, who shot video of the crash of the SSJ-100 “Aeroflot” at Sheremetyevo airport on 5 may. Writes Andrew Alshevskih on his page on the social network Facebook, “after receiving my request, the interior Ministry established that the survey was distributed in two familiar police captain. In secret around the world — it’s about them. For which he paid. One fired bodies, the second received disciplinary action”.

Alshevskih also published a response from the interior Ministry. The paper reported that the video of the catastrophe was made by the staff of linear Department of the Ministry of internal Affairs of the Russian Federation at Sheremetyevo transport management of the interior Ministry for the Central district. The above names are both captains of police. One of them in the future distributed a record among friends in WhatsApp messenger. From there, the record hit the Internet and “caused a public outcry, with negative consequences”.

Noted that the actions of the police squads of the offense or the crime, but their offense, “contrary to the requirements of professional behavior and ethical foundations of performance in law enforcement”. The police acknowledged that the police misconduct has tarnished the honor of the staff of bodies of internal Affairs, and dismissed one of them and the other reprimanded.

Let us add that on may 6 on his page on Facebook Andrey Alshevskih troubled by the fact how fast the Internet get footage from CCTV cameras installed at the airport and to the airfield. Probably about the recordings, not video recordings with mobile phones, was discussed in its request.

We will remind, in the evening of may 5 Sukhoi Superjet 100 “Aeroflot” flying from Moscow to Murmansk, returned to Sheremetyevo airport and caught fire during the emergency landing. 41 of the 78 people aboard were killed. The consequence considers the version about insufficient qualification of pilots and dispatchers, adverse weather conditions or malfunction of the aircraft.