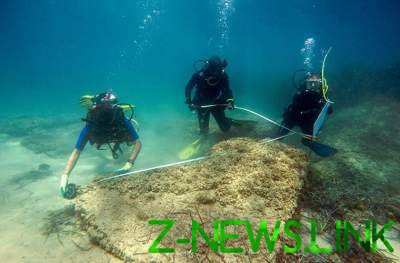 Archaeologists have found the ruins of the destroyed tsunami of the Roman town.

Archaeologists have found proof that the ancient Roman city of Neapolis, located in the northeast of modern Tunis in a 365 year, partially went under water due to tsunami.

The head of the Tunisian-Italian archaeological mission Munir Panter reported that experts found at the bottom of the sea the signs of streets and monuments, as well as about 100 tanks used for the production of haruma — brand fish seasoning, which was very popular in Ancient Rome.

According to Pantera, in the IV century BC Neapolis was an important center in the Roman world for the production of haruma and salted fish. It is to them that the inhabitants of the city owed their wealth.

A team of Pantera started looking Neapolis in 2010, but the breakthrough discovery of the ruins, which extend over 20 hectares, archeologists did just now thanks to favorable weather conditions.

The discovery proved that on 21 July 365 in the year Neapolis are indeed some went under water due to tsunami. The wave severely damaged Alexandria in Egypt and the Greek island of Crete.

At present, Limassol is known very little. Scientists believe that the reason for this was that during the Third Punic war, the city sided with Carthage, and not the Romans. Apparently, in retaliation, the city is hardly mentioned in the Roman literature over a long period.

After the disappearance of Neapolis near it was founded the Arab village Nabeul is a modern resort town on the North-East of Tunisia.