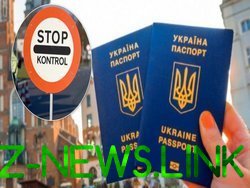 Ukrainians in the paddy wagon and taken to a police cell at the airport, and placed in the cells, including children.

At the airport of the capital of Greece – Athens – detained 17 citizens of Ukraine, who arrived on a flight from Kiev. It is reported by the European true with reference to one of the detained passengers on Sunday 5 July.

According to him, they were arrested because of the ban on entry to EU citizens in third countries.

They arrived in Athens on Saturday evening, two flights – Ryanair (departed from Borispol to 18:00) and Wizz Air (departed at 18:45 from airport Kiev).

On arrival at passport control 17 Ukrainian citizens were denied entry into the country. There were 15 adults and two children 8 and 9 years old.

“When we arrived in Zhulyany us to check strictly inquired and examined all the documents (we even had a test done in the laboratory and provided with stamp). All showing and telling, we were allowed to go to passport control. And after arrival at passport control we were stopped and sent. While we were at the airport, we tried to make him sign a consent to deportation, we refused”, – told one of the passengers max.

Passengers in the van were taken to a police cell at the airport, and placed in the cells, including children. They spent the night there and remain there for the moment.

The passengers took away all things, including notebooks, allowing them to leave the phones but no chargers.

Ukrainians complain of poor conditions and poor sanitation: no toilets in the soap and toilet paper, they were allowed to purchase at their own expense, on the floor lay the dead cockroaches. Also, they do not provide water and food.

According to passengers, this morning they contacted the Consul, who told them that the Ukrainians had no right to enter and have to return to Ukraine the same flights. Both flights will be only on Tuesday. She also promised to contact local authorities to help in solving this situation.

Ukrainian diplomats did not come to the airport. Passengers called the “hotline” of the Ministry of foreign Affairs, where they promised to investigate the situation and provide assistance.

Earlier this week, Poland introduced a mandatory quarantine for passengers arriving from Ukraine. The corresponding order was published on 2 July on the website of the Ministry of foreign Affairs of Poland.