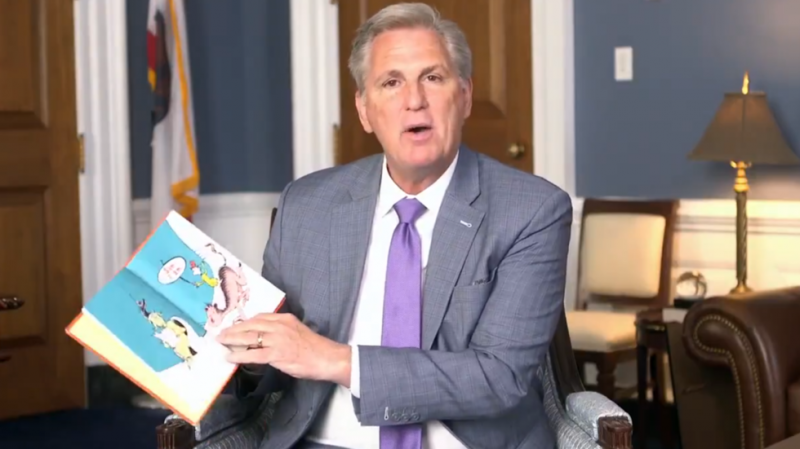 Days after Dr. Seuss’ estate announced that six of the author’s books would no longer be published due to racially insensitive imagery, McCarthy took to Twitter to show solidarity with the late children’s author.

“I still like Dr. Seuss, so I decided to read Green Eggs and Ham,” he wrote, adding: “RT if you still like him too!”

The Republican congressman included a video of him sitting in a chair as he read the classic children’s story.

However, the impromptu storytime received a lackluster reception on social media. Congressman Ted Lieu (D-CA) reposted the video, claiming that McCarthy was more focused on reading ‘Green Eggs and Ham’ than helping the American people.

The comment triggered a flood of mockery and scorn directed at McCarthy. For starters, few were impressed by the congressman’s storytelling skills, with some even joking that the book matched his 3rd-grade reading level.

Numerous others noted that the lawmaker had chosen to read one of the dozens of Dr. Seuss books that still remain in print, seemingly side-stepping the actual controversy.

Although many of the comments alleged that McCarthy was using Dr. Seuss to distract from more pressing issues, several replies argued that there was nothing trivial about “banning” books.

Dr. Seuss’ estate revealed on Tuesday that it would no longer publish six titles: ‘McElligot’s Pool,’ ‘On Beyond Zebra!,’ ‘Scrambled Eggs Super!,’ ‘The Cat’s Quizzer,’ ‘And to Think That I Saw It on Mulberry Street’, and ‘If I Ran the Zoo’.

The books will be discontinued because they “portray people in ways that are hurtful and wrong,” Dr. Seuss Enterprises said in a statement. However, the publisher didn’t provide a detailed rationale explaining why the books were singled out. Some have alleged that the books contain racist imagery and stereotypes, even though several of the stories include few depictions of people or none at all.

The move has been met with considerable pushback. Copies of the books began selling for exorbitant prices, and libraries across the United States said that they would not pull the stories from their shelves, stressing the need to protect freedom of choice.