At least 80 injured, including ONE-YEAR-OLD BABY, amid clashes between Palestinians & Israeli police in Jerusalem (VIDEO) 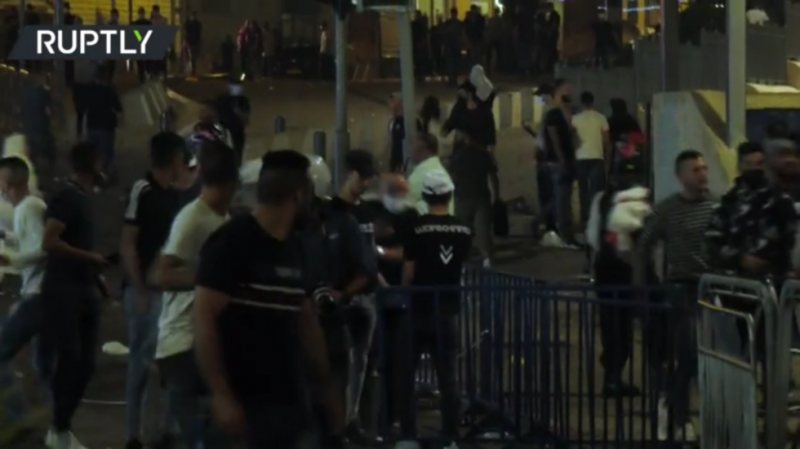 At least 80 people were injured across Jerusalem on Sunday, the Palestine Red Crescent said in a statement. Several underage children were among the injured, including a one-year-old baby, and some 14 people have been hospitalized, the group added. One paramedic received injuries as well.

The tensions were particularly high around Damascus Gate, one of the main entrances to Jerusalem’s Old City. There was an especially high presence of Israeli police there, who were backed up by mounted units and water cannons. Palestinian youth clashed with the Israeli forces, pelting them with various projectiles and tearing down police barricades. The police fired rubber-coated bullets and repeatedly used stun grenades to contain the crowd.

Palestinians accused the Israeli police of trying to prevent them from praying at the Al-Aqsa Mosque. The latest clashes came as thousands of Muslims flocked to the Old City to celebrate Laylat al-Qadr on Saturday, one of the most revered nights in the holy month of Ramadan. According to Islamic belief, the first verses of the Koran were revealed to the Prophet Mohammed on this night. 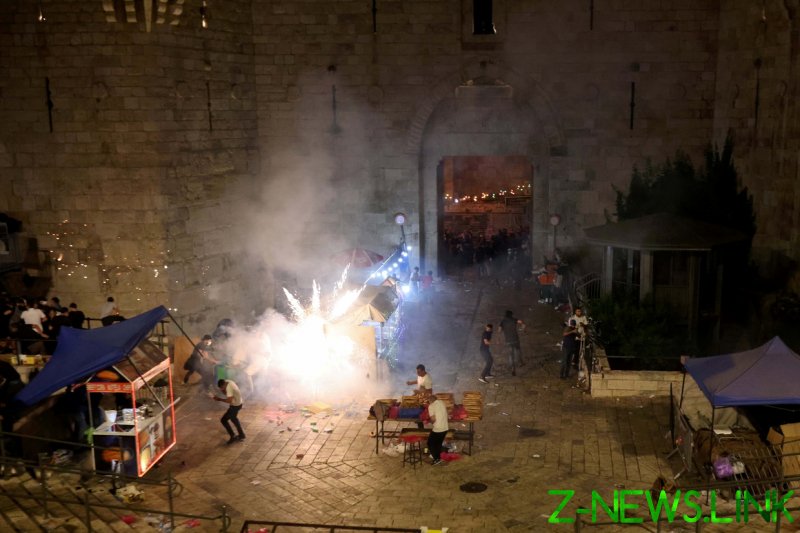 Palestinians react to a stun grenade fired by Israeli police during clashes in Jerusalem’s Old City on May 9, 2021. © Reuters / Ronen Zvulun

Tensions have been particularly high in Jerusalem in recent days. Friday turned out to be particularly violent, with over 200 Palestinians and at least 18 Israeli police injured.

The violence has been fueled by Tel Aviv’s move to seemingly prevent Muslim pilgrims from entering Jerusalem. On Saturday, dozens of buses with pilgrims were stopped on the main highway to Jerusalem, as police asserted some of them were planning to “riot” and forced the “suspicious” passengers off the buses.

The looming forced evictions of several Palestinian families from their homes in the East Jerusalem neighborhood of Sheikh Jarrah, part of the occupied Palestinian territories, in order to allow Israeli settlers to move in, have also contributed to the ongoing tensions. If the court allows the evictions to proceed, six families face the threat of immediate removal, with seven more likely to be forced out by August, bringing a total number of those evicted to around 60.

Earlier this year, the Israeli Central Court in East Jerusalem approved the evictions, but the final decision on the matter is now in the hands of the Supreme Court. The court was scheduled to rule on the evictions on Thursday, but, amid widespread Palestinian protests, the hearing was delayed until May 10 and then postponed even further on Sunday. The new date will be within the next 30 days, the Supreme Court said.

Speaking after the overnight violence on Sunday, Israeli PM Benjamin Netanyahu brushed off the criticism of the eviction plans, saying Israel “firmly rejects” the pressure not to build in Jerusalem.