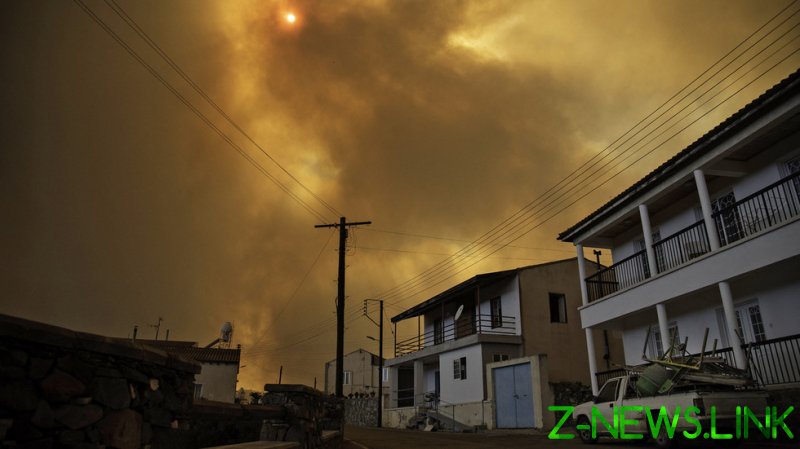 The fire started around midday on Saturday amid a heatwave, with temperatures exceeding 40C (104F). Strong winds spread the fires on Sunday, affecting an area of over 50 square kilometers (19 square miles), Reuters reported.

At least 10 communities have been affected, and villages are being evacuated. Four bodies have been found near Odou village in the Larnaca district, believed to belong to workers from Egypt who went missing in the area.

While the official cause of the fire is still unclear, there are reports that a 67-year-old person has been questioned by police in connection with the disaster.

“It’s one of the most destructive [fires] we have experienced,” Cyprus President Nicos Anastasiades told the media upon visiting the area. He also reassured the affected communities of support, writing on Twitter that the tragedy is the largest of its kind since 1974.

The Troodos mountain range in the western part of Cyprus suffered badly, with many of its pine forests and fruit tree orchards burnt to ashes. “It burnt everything,” a devastated local farmer told the media, adding that “it will take them at least 10 years to grow back.”

Firefighting planes have been sent from Greece, while British military aircraft from their bases in Cyprus are joining in to fight the flames. Italy and Israel have also pledged to help.