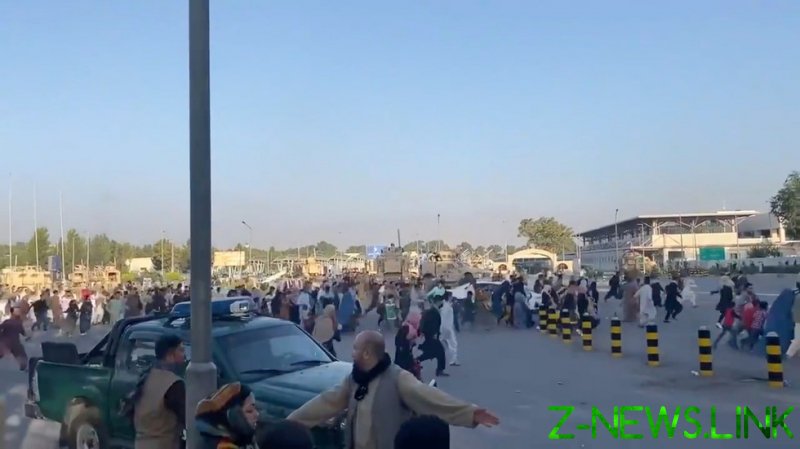 Videos posted to social media on Monday show anarchic scenes at Kabul International Airport, with hopeful evacuees scrambling to catch a flight out of the country amid bursts of gunfire.

At least three people were shot and killed near the passenger terminal of the airport, the Wall Street Journal reported. Graphic footage posted to social media appears to show three bodies lying on the ground just outside the building. It’s unclear what led to the deaths, but according to reports, at least some of the shooting that occurred at the airport was done by US soldiers as a form of “crowd control.”

A US official told Reuters that American troops tasked with securing the airport fired in the air on Monday morning to dissuade hundreds of panicked Afghans from congregating near the runway.

“The crowd was out of control,” the official said, adding that “the firing was only done to defuse the chaos.”

According to the Journal, US Marines fired warning shots late on Sunday night after dozens of Afghans breached the airport’s security perimeter and attempted to board an idling C-17 military transport plane.

The US troops were dispatched to the airport to help with the evacuation of diplomatic staff and foreign citizens based in the Afghan capital. But even foreign nationals are reportedly having trouble fleeing Kabul, which was captured by the Taliban on Sunday. Stephen Dziedzic, a reporter for the Australian Broadcasting Corporation, said that he spoke with two Australians currently at the airport.

“One says the US military has struggled to maintain order – there’s the sound of gunfire, but [the] source [is] unclear. He says he’s constantly trying to contact the Australian government but he’s got no response,” the journalist wrote. He said that it was possible that US troops were responsible for the gunfire but he couldn’t confirm this.

The ongoing chaos follows a night of turmoil in the city, as civilians began to pour into the airport in hope of securing a flight out of the country. Footage posted to social media late on Sunday evening showed people rushing into the airport as gunshots rang out – apparently fired by airport security to stop the stampede.

Media outlets citing senior US military officials later reported that commercial flights had been suspended at the airport due to the gunfire.

Thousands of Afghans attempting to flee the capital led to huge traffic jams on Sunday, as well as stories from journalists and foreign nationals about their frenzied efforts to get out of the city.

Images of American military helicopters airlifting US embassy staff out of Kabul led numerous pundits and observers to compare the haphazard evacuation to the US’ 1975 retreat from Saigon, Vietnam.

President Ashraf Ghani fled the country hours after the Taliban had surrounded Kabul on Sunday. By the end of the day, the militants had been handed control of the country, following a whirlwind offensive that coincided with the withdrawal of the US-led coalition after nearly 20 years of war.