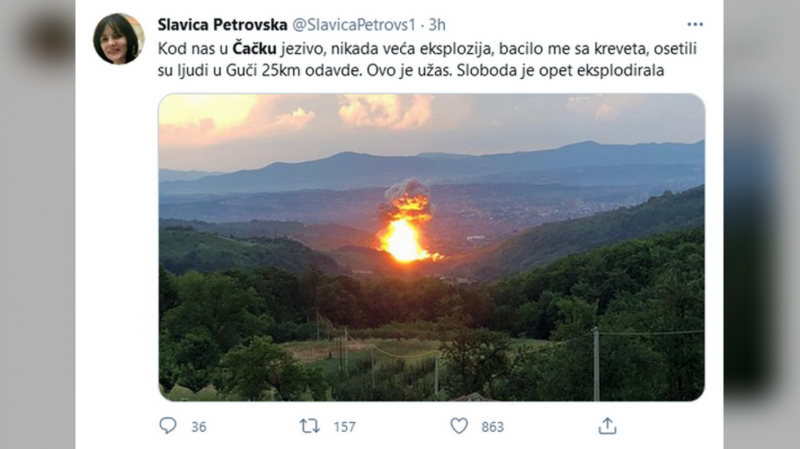 “Due to the explosion at the Sloboda facility, it is necessary to urgently evacuate all citizens living in the vicinity of the factory. The place of evacuation is the city stadium,” Cacak mayor Milun Todorović announced on social media on Saturday evening, as flames were ripping through the factory and reportedly began spreading to nearby territory.

The ‘Sloboda’ (Freedom) plant, southwest of Cacak, was shaken by a powerful blast around 8 p.m local time, which was followed by another, a smaller one, according to the Serbian TV.

Two male and one female workers have suffered injuries in the blast, reportedly from the shattered glass, and were transported to hospital.

The Saturday incident marks the second time in less than a month the factory is hit by a powerful explosion. On June 4, a series of blasts rocked the plant, and evacuation was ordered for nearby houses. While the explosions continued for several days, no one was injured in the incident. At the time, Serbian President Aleksandar Vucic put damage from the blast at up to 2 million euros ($2.4 million).

Founded in 1948, Sloboda employs about than 2,500 workers and specializes in production of tank and artillery shells, as well as several types of rocket-propelled anti-tank weapons. It also produces some home appliances.

The factory was crippled during the 1999 NATO bombing campaign over Kosovo, but has been rebuilt since.