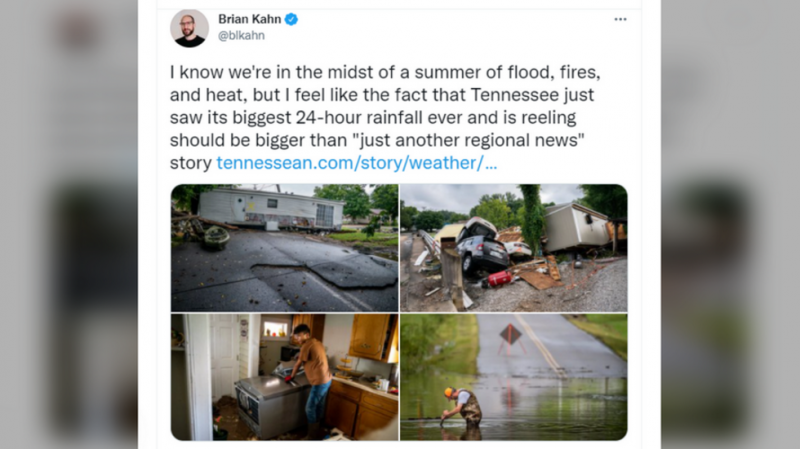 The death toll in Humphreys County climbed to 21 as of Sunday afternoon, according to the local emergency management agency, and 45 people were still missing as crews went house to house.

It’s not clear whether there have been any deaths in neighboring counties. The National Weather Service (NWS) issued a flash flood emergency on Saturday for Humphreys, Houston, Dickson and Hickman counties. A stretch of Interstate 40 had to be closed on Saturday as more than 15 inches (over 380mm) of rain fell in Humphreys County and parts of Hickman County got nearly 12 inches (305mm).

The Piney River rose to nearly 32 feet (9.75m) in Hickman County, exceeding a previous record of 20 feet (6m), according to the NWS. The measure was seven feet above major flood stage.

The Nashville area and other parts of central Tennessee have historically been hit by major floods, including a 2010 disaster that killed 31 people in three states and caused $2.3 billion in property damage. At least four people were killed by flooding in the region in March, then the worst inundation since 2010.

However, Humphreys County Sheriff Chris Davis told Nashville’s Tennessean newspaper that Saturday’s flood was the worst he has seen in 28 years with the department. NWS meteorologist Krissy Hurley called the latest disaster “catastrophic.”

The hardest-hit areas were directly west and southwest of Nashville, in towns such as Waverly and McEwen. In the county seat of Dickson, at least 11 water rescues were reported. The Tennessee National Guard, the Tennessee Highway Patrol and the Nashville Fire Department, among other agencies, sent crews to Humphreys County to help with rescue and recovery efforts.

Some communities in the area got 20-25% of their average yearly rainfall totals on Saturday morning alone, and an additional 2-4 inches of rain was possible, the NWS said.