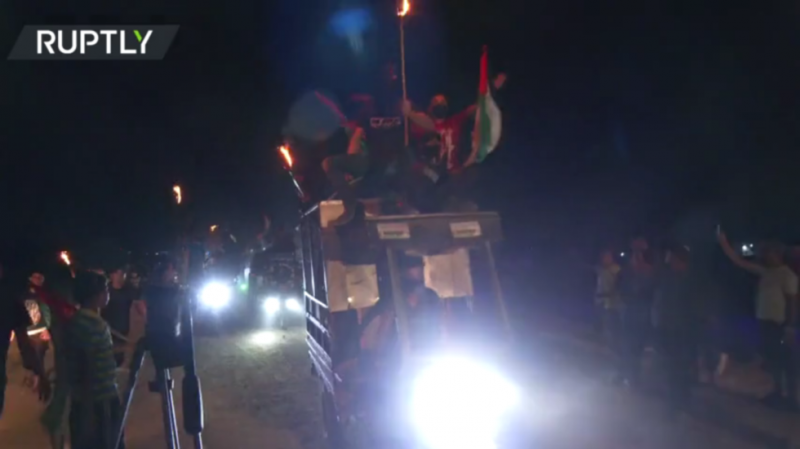 Clashes erupted on Thursday, when crowds of Palestinian protesters burnt tires and torches in at least five locations alongside the border. Huge explosions could be seen from a distance in footage from RT’s video agency Ruptly.

Israeli forces deployed tear gas over the fence to disperse the demonstrators, and also responded with live fire after explosive devices were thrown by protesters across the border, according to the Israeli military. A 26-year-old man was shot dead near the city of Jabalia north of Gaza City, according to Palestinian health officials, who also said that five other people were injured in the gunfire. A 15-year-old protester is in serious condition.

The situation at the border has escalated over the past couple of weeks, with a series of protests happening at night. At least two other fatalities have been reported on the Palestinian side, and an Israeli soldier was killed.

Last week, arson balloons were sent from the Hamas-controlled enclave, causing fires on the other side. Israel responded with airstrikes, and violence broke out on the border. Earlier in August, multiple blasts rocked Gaza after the Israel Defense Forces (IDF) launched a series of airstrikes in apparent retaliation to border clashes.

Demonstrators are demanding a full lifting of the territory’s blockade, as border crossings and the movement of goods are tightly controlled by Israel. Indirect negotiations to establish a new status quo between Hamas and Israel have been held through intermediaries, while Palestinian Authority (PA) President Mahmoud Abbas recently met with Israeli Defense Minister Benny Gantz to discuss a range of issues.

Hamas has warned that border escalations might worsen if the blockade – tightened after the most serious flare-up in years between the two sides this May – is not lifted completely. Israel has eased some of the restrictions, as it let around 1,000 vaccinated Palestinian workers to travel into Israeli territory and authorized more goods to enter Gaza.