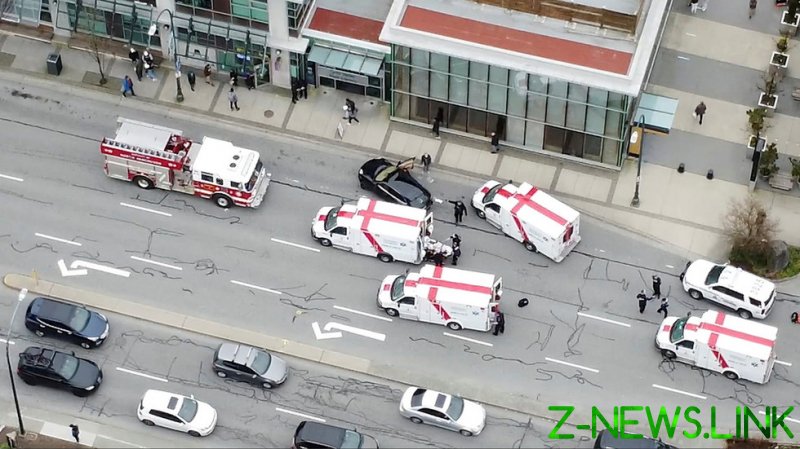 An incident unfolded on Saturday afternoon local time at the Lynn Valley Library, a public library in the district of North Vancouver, British Columbia, Canada.

“Multiple victims” were stabbed “inside and outside” the facility, police reported. Six people were taken to hospital in wake of the rampage.

The attacker, who, police believe, acted alone, was apprehended in the vicinity of the library shortly afterwards. Footage has emerged on social media showing multiple police officers swooping in on a man, who appears to be carrying a knife. Moments before his arrest, the man collapses to the ground, with the person behind filming the video saying that “he’s cut himself.”

It’s unclear if the stabbing suspect is the man in the video.

The suspected attacker is known to police, according to CBC News, which reported the alleged stabber had a criminal record. A witness told the outlet that the man was wielding “a very large” knife as he went on his rampage outside a shop next to the library. The attacker then proceeded to the restroom, where he found his another victim, the witness claimed.

In a statement on Twitter, the library said that it has shut down for the rest of the day, warning locals to avoid the area.

The stabbing has prompted a massive police response, that saw over a dozen ambulances rushing to the scene. North Vancouver Mayor Mike Little has called the incident “deeply unsettling”, commending law enforcement and first responders for “the quick action,” while urging potential witnesses to contact the authority.

Responding to the news of the stabbing, Canadian PM Justin Trudeau has referred to the attack as “a violent incident,” wishing “a speedy recovery” to the injured victims.