At Kalinovka will have to clear thousands of explosive objects 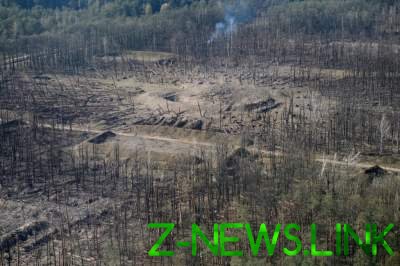 Rescuers are searching for explosive items.

In Vinnytsia region the pyrotechnics found 998 explosive objects in nearby villages near Kalinovka.

“In the course of conducting humanitarian demining work discovered, confiscated and transferred to representatives of the 48 Arsenal – 998 explosive subjects”, – stated in the message of the SSES.

Rescuers said that as of 7:00 am 4 Oct not see open fires burning and explosions of ammunition in the warehouse.

Earlier, on Tuesday 3 October, a week after the fire in military warehouses in Kalinovka, finally ceased to detonate the shells. And yet in the 10-kilometer zone around the Arsenal rescuers searching for explosive items in the affected villages to restore homes. However, people complain that slate and glass is not enough, especially for the elderly who have no one to take care of. While there were businessmen, who began to sell building materials allocated by the authorities to rebuild houses.

Recall that the investigators are investigating four main versions of the fire in the village on September 26. While a range of Pro-government Russian politicians said about sabotage. Experts interviewed by “Vesti” began to lean towards the version about the criminal negligence of the military and banal corruption, which would cover with fire. And already on 28 September, the chief military Prosecutor ruled the original dubbed version of the saboteurs. According to him, versions of enemy action investigators there.