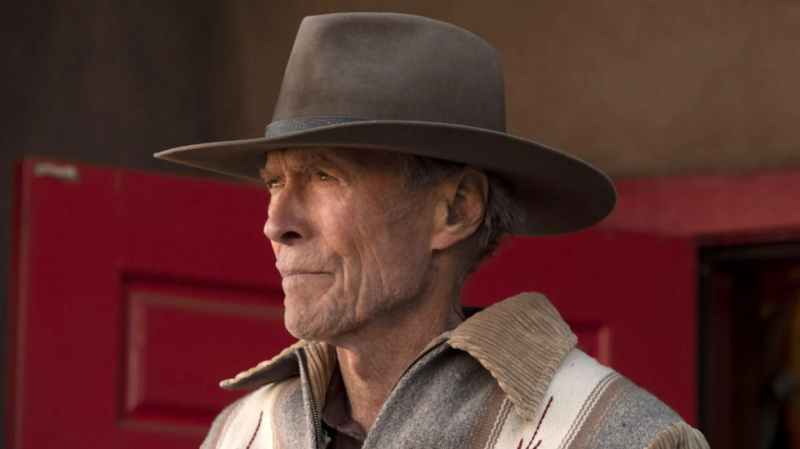 The Hollywood icon has long been an avatar for America. From the phenomenal spaghetti westerns of Sergio Leone to ‘Dirty Harry’ to his genre-closing masterpiece ‘Unforgiven’ in 1992, Eastwood has been an integral figure embodying America’s sense of itself and its masculinity.

His new movie ‘Cry Macho,’ which he directs and stars in, isn’t in the same cinematic ballpark as ‘Unforgiven’ or ‘Dirty Harry.’ In fact, it’s a pretty dreadful movie, but that doesn’t mean it lacks insight.

The film tells the story of Mike Milo (Eastwood), a very old ranch hand hired by wealthy Texan Howard Polk to get his wayward teenage son, Rafo and pet rooster named Macho, from Mexico, out of the clutches of Rafo’s drug-dealing, abusive mother.

Eastwood has been starring in movies for 57 years and, while he’s never been a great actor, he’s always been a formidable and compelling screen presence. But he is 91 years old, and while he’s robust for that age, that doesn’t make it any less delusional that he cast himself as a character who is 40 in the book upon which the movie is based. Hell, Eastwood even turned down this same role nearly 40 years ago, when he was a much more appropriate age.

At 91, Eastwood doesn’t just seem old, but elderly and fragile, as he moves like an extra on ‘Night of the Living Dead.’ The sight of him breaking horses, dancing the night away and punching thugs beggars belief.

When a woman less than half his age is so overcome with sexual attraction she tries to seduce him, and another about half his age falls madly in love with him, it’s utterly absurd.

This aggressive self-delusion is the perfect embodiment of the current state of the American empire, which is in a sorry condition but sees the ruggedly handsome Clint Eastwood of 1965 in the mirror instead of the more accurate reflection of the feeble Clint Eastwood of today.

This level of delusion is equivalent to those American voters who convinced themselves that Joe Biden wasn’t a failing, establishment stooge or that Donald Trump was anything but a bloated, bloviating reality-TV buffoon.

Like so much of America and American culture, ‘Cry Macho’ is a cheap, sloppy, dramatically and narratively incoherent venture that features some of the worst acting you’ll ever see. When the best actor in your movie is a rooster, you’ve got serious problems.

Eastwood is famous, or infamous, for shooting minimal takes on his films in order to stay on time and on budget. When his cast consists of all-time greats like Morgan Freeman, Gene Hackman and Richard Harris, as it did on ‘Unforgiven,’ this approach can work incredibly well.

When, in an attempt to cut corners and save money, the cast is loaded with unknowns, as it is on ‘Cry Macho,’ then the results can be frighteningly amateurish – which is painfully similar to the cast of characters currently starring in the stale drama of American politics. Who among us doesn’t think a rooster would be a significant upgrade from Mitch McConnell, Ted Cruz, Marco Rubio, Chuck Schumer, Nancy Pelosi, Alexandria Ocasio-Cortez or any of the other vacuous and vapid villains inhabiting Washington?

‘Cry Macho,’ much like ‘Unforgiven’ 30 years ago, highlights Eastwood wrestling with the darker side of his uniquely American archetype.

In ‘Unforgiven’ he grappled with the ramifications of the violence he portrayed on-screen and that the American ethos unleashed upon the world. In ‘Cry Macho’ the meditation is not nearly as profound, but it’s certainly there.

The teenage Rafo, one of the countless two-dimensional, third-world characters in the film that can either be a sinner or a saint and nothing in-between, is uncomfortably desperate to prove his masculinity, as Mike points out when he tells him how odd it is for “a man to name his cock Macho.”

Eastwood saying the lines “the macho thing is overrated” and “they don’t like that macho stuff in America” to Rafo feels like a frank admission that America has become so hyper-feminized that even Clint Eastwood, the archetype of American masculinity, is now admitting defeat.

But the most insightful dialogue comes from Rafo, who confronts Eastwood’s Mike and rips into him, eviscerating by extension the notion of American exceptionalism, when he says “you used to be tough, now you’re weak…you used to be strong, and now you’re nothing.”

That’s uncomfortably insightful as the decrepit Clint Eastwood of today perfectly reflects the current state of America, as he’s delusional and feeble. The reality is that America pretending it’s anything but a decadent nation in a death spiral doesn’t change that fact, it just maintains the facade for those too frightened to admit the truth.

This is reminiscent of when Rafo continuously defends his pet rooster by telling Mike “he’s not a chicken, he’s Macho!” Calling a chicken ‘Macho” doesn’t change the fact that it’s a chicken, and sooner or later it will end up sliced and diced on the dinner table.

I wish ‘Cry Macho’ was a better movie because it has something to say and didn’t say it very well, but the one obvious takeaway is that, if the once-great but now over-the-hill Clint Eastwood is the embodiment of modern American masculinity, now is definitely the time to cry macho.