Astronomers reported an extremely rare phenomenon on the Sun 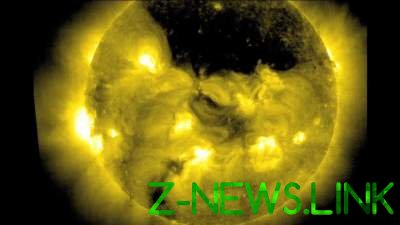 NASA has discovered a giant dark hole in the solar atmosphere.

The Solar Dynamics Observatory, NASA took this ultraviolet picture of the coronal holes on 8 November, and NASA published it on Monday (20 November). A large, dark “hole” in the sun’s atmosphere allows solar wind to escape into space.

In accordance with the NASA, these holes may appear in the sun’s atmosphere or corona as the result of the dynamics of the magnetic field of the star. Just as the kinks and bends magnetic fields can cause sun spots and solar flares, they can also open temporary holes in the crown. As the hole in the ozone layer on Earth, coronal hole actually goes through the entire solar atmosphere. It’s just the area, cooler and less dense than the surrounding plasma.

See also:  Red lake in Kiev: called the cause of the strange phenomenon

The “hole” in the magnetic field allows the particles to slip away much faster than normal solar wind, according to the Center space weather forecast (SWPC). These high-speed streams can disturb the Earth’s magnetosphere, which can disrupt satellites. High-energy particles can also cause the auroras of the planet, the Northern and southern lights.

Such Coronal holes will appear more often, since the sun is close to the minimum of its 11-year cycle, which will come in 2019.