Astronomers have discovered lake on Mars 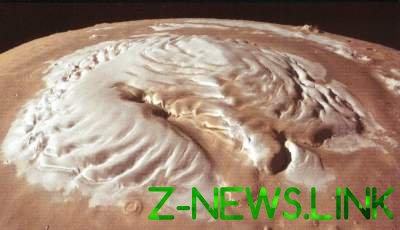 Astronomers believe that beneath the dusty regolith of Mars is not less than five million cubic kilometers of ice.

So you can be sure that on the red planet there is no shortage of water.

In the nineteenth century the American astronomer Percival Lowell popularized the idea that there are channels crossing the surface of Mars, carrying water from the poles. The best telescopes and the advent of space probes in the 1960-ies showed channels like a Mirage. Low temperature of Mars and the weak pressure of its thin atmosphere means that no liquid water will remain on the surface. However, in 2006, the seasonal changes of a pair of Martian craters has led to the fact that astronomers have suggested that a small amount of liquid water may be a little bubble on the surface during the Martian summer. However, over a decade later, this hypothesis remains unproven.

See also:  A vivid kaleidoscope: shows the true color of the surface of the moon

In an article published in the journal Science on July 25, Roberto Orosei from the National Institute of astrophysics in Italy and his colleagues reported the discovery of lakes of liquid water 20 km in diameter buried 1.5 km beneath the surface of Mars, near its southern polar ice cap. The lake seems Martian cousin of the earth’s lake Vostok, an underground lake in Antarctica.

The team used radar waves to monitor the planet’s surface. Different materials reflect radar waves with different intensities. The team used radar sensors on the space probe “Mars Express” to explore the area 200 km South of the Arctic plains of the planet. After more than three years of data collection, Dr. Orosei felt quite confident in asserting that water is the only explanation of the evidence team.

See also:  In Norway found the burial boat of Vikings

The fact that the lake is underground, is the key to its conservation, says Suzanne Spencer, a planetary scientist from the Open University in the UK. As in Antarctica, the thickness of the ice cover isolates the water from freezing on the surface of the planet. At the same time, the pressure of the ice, lowers the freezing point of water below 0 °C. if the water “flavored” salts of sodium, magnesium and calcium, all of which are discovered on Mars, the temperature of freezing can further be reduced.

In the recent past on Mars there were microbes, their life would cling to isolated pockets of water below the planet’s surface. Probably for about 3.8 billion years, Mars was dry, which is a very long period for the lake, life-saving.