Asked to give birth 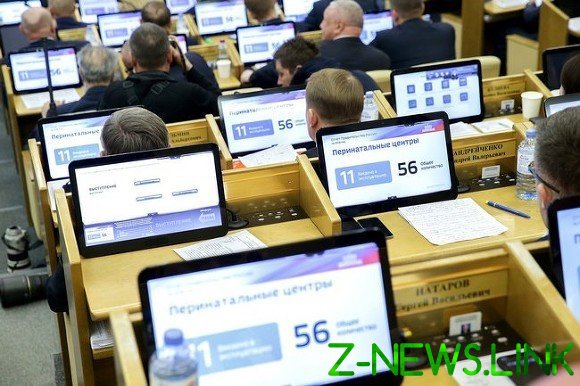 State Duma deputies want to in Russian families there are more children and that the citizens no longer afraid of the mortgage loans.

The state Duma on Tuesday unanimously approved the first reading of a bill on a partial repayment of government loan mortgage to large families. The new law is adopted pursuant to the President’s address to Parliament in which he announced a number of proposals for the state support of families with children.

It was noticeable that the MPs who usually cheer greeted the presidential ideas, this time pressed buttons “for” without much enthusiasm. The bill at the plenary session never mentioned and as it turns out, is no accident.

The fact that in this document there is no specifics — such bills in the Duma is usually taken to refer to the “shell” or even “pacifier”. In fact, the deputies voluntarily waived his right to fix in the Federal law payments to large families, and delegated it to the government. It is, as follows from the document, and will determine the size and order of payment, and the circle of their recipients.

In other words, important decisions about the provision of government support to families with children in the state Duma decided not to regulate Federal laws, and regulations of the government. But as you know, with the development and adoption of these in the White house can only stall so long, and then generally to take, to cancel. And the deputies will not have the leverage to put pressure on the government. So the Deputy sadness is understandable: they once again pointed out the real place of the state Duma in the power system. You say, take the law, and then we will decide.

It is noteworthy that the draft law was submitted to the Duma not by government, but by a group of deputies and senators, headed by the speakers of both houses of Parliament. However, the name of the Chairman of the state Duma Vyacheslav Volodin in the list of authors at this time not listed first, as usual, and the second after the head of the Duma Committee on Anatoly Aksakov Finance. By the way, Volodin was not present on the discussion of the draft — he went to a meeting of the inter-parliamentary Commission on cooperation of the state Duma and National Assembly of the Republic of Korea.

So, Aksakov, as the first in the list (and it’s hardly about the alphabet) had to take the rap for all. From his words, the deputies learned that to make payments on the mortgage loan will retroactively from 1 January 2019 to families in which was born the third or subsequent child, and the amount of 450 thousand rubles. This measure of state support will be valid until 2022, and according to preliminary estimates, this year alone, the assistance can get about 30 thousand families.

Thus Aksakov is assured that the Federal budget needed for this money is already reserved for all the three years. The solution is the extension of the program will take depending on the thickness of the public purse.

Colleagues Aksakov immediately he noticed that in the text of the law does not, and he recounts an explanatory note. Deputies also believe the contradictory policy of supporting families with children. With one hand it gives money, and the other immediately takes them back.

So, the liberal-Democrat Sergey Ivanov gave an example of a single mother with three children from Rostov, with which the authorities “tear up” rate for garbage, as with adult family members. Thus for each child, she receives total 846 rubles. “This is the measure of social support, which is our richest state provides the families with three children!”, — was indignant the Deputy. “SR” Oleg Nilov asked to give a large plot of land and one hundred cubic metres of timber instead of selling it in Finland or China. “And here is not the family with three children, and five to ten”, — says the Deputy.

“So work!”, — urged citizens to give birth to as many children as possible Aksakov. And United Russia Igor Divinsky and even called the characters of those who raise three or more children. He recalled the unfavourable demographic Outlook for Russia, according to which by 2050 the population of our country may fall to 138 million people. Here are just below we have really started to give birth, these measures obviously will not be enough.