Home / WORLD / As US finally drops it’s opposition to Nord Stream 2, it’s clear plans to block the pipeline were always about money, not security

As US finally drops it’s opposition to Nord Stream 2, it’s clear plans to block the pipeline were always about money, not security 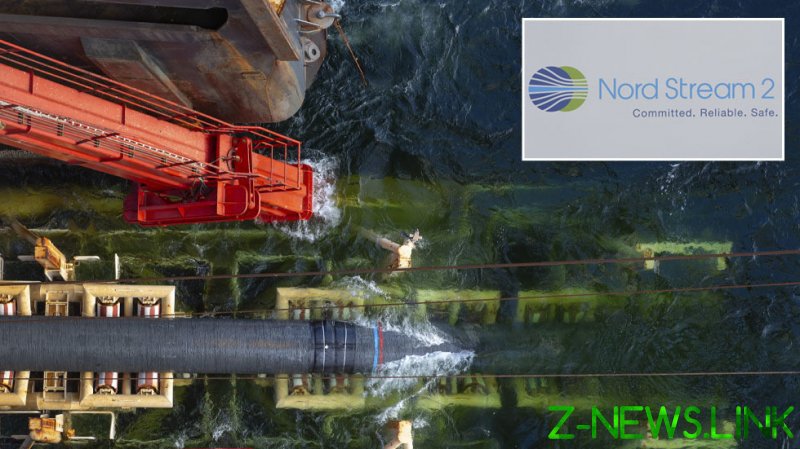 Signing a new agreement with Berlin, the US has put itself behind Germany as its key ally in Europe. Not Ukraine, which has thrown up no end of objections and appeals over the project. As would be expected, there has been a furious reaction in some quarters.

Some are hysterical in a comical register: The Kyiv Post, for instance, mouthpiece of the North American-Ukrainian “diaspora,” cries “Betrayal!” in best British-yellow press style and declares Chancellor Angela Merkel to be “Ukraine’s foe of the week.”

Others are lewd. US Senator and Republican demagogue Ted Cruz has reached for obscene language about the American president “being in bed with Putin” and “spooning.”

Democrats, sadly, only have themselves to blame. Such juvenile trashiness is now bipartisan in the USA, where “Russiagate” hysteria came with a wave of homophobic sex jokes from liberals.

And some reactions are over the top and out of touch with reality, such as the joint Polish-Ukrainian foreign ministers’ declaration, which warns of “a political, military and energy threat for Ukraine and Central Europe” and of “Russia’s potential to destabilize” European security as well as to create “divisions among NATO and European Union member states.”

You might feel that divisions between NATO allies were deepened not by Russia, finishing what was a six-year project already, but the USA (and its “Atlanticist” cheerleaders) when they tried to intervene with blunt last-minute sanctions, effectively targeting a central ally and a leading member of the military bloc.

When it comes to “Russia’s potential to destabilize” European security, again, such concerns would look more serious if Poland had also objected to the USA’s recent abandoning of the INF Treaty, for instance. Or, in fact, to its general addiction to wars in the Middle East, which is far from the USA but has had direct repercussions in Europe.

Yet Poland publicly supported the American withdrawal from the treaty and has been a fairly enthusiastic auxiliary in the USA’s Middle Eastern invasions and occupations. And no, this is not a case of “whataboutism.” Because, if European security is the order of the day, then it needs to be considered in the round.

But let’s take a step back. Very much has already been said about Nord Stream 2. There’s nothing surprising about the fact that such a colossal, long-term project has produced intensive public scrutiny and debate.

Moreover, with important commercial and state interests involved, it’s only natural that that debate has often been fierce and that it may end with de facto decisions but not with some great reconciliation.

But between entrenched positions and rapid reactions, it has become hard to see the forest for the trees. Let’s try to regain a sense of perspective by focusing on its key aspects: economics, environment, and – last but not least – politics.

If other, important, aspects are set aside for a moment, assessing the economic impact of Nord Stream 2 involves long-term projections, regarding, for instance, demographics, energy transitions, and, of course, general economic development. Without overly dredging through the complex detail of such analyses, Nord Stream 2 clearly has the potential to make economic sense, or in the words of a careful, and often critical, recent study from Germany’s Stiftung Wissenschaft und Politik:

“On a strictly economic basis, Nord Stream 2 doubles the transport capacity through the Baltic Sea … and connects the newly developed deposits on the Yamal Peninsula with the major gas markets in Europe via a route that is approximately 1,000 km shorter, more modern, and more efficient than the one through Ukraine.”

Given a number of further plausible assumptions, for instance regarding Gazprom’s contract and pricing policies and the development of alternative energy sources in and outside Europe, Nord Stream 2 is as good a project as many others, and probably better than some.

As a minimum – and no matter what the analysts at NATO lobby group The Atlantic Council may claim – there is no convincing commercial case against it.

Building a pipeline of a length of roughly 1,200 kilometers (in twin strands) on the Baltic seabed to take natural gas from Siberia to Europe raises obvious environmental questions.

Aside from the rhetoric, there are serious issues about the environmental effects of Nord Stream 2’s construction, of its future operation, and regarding the impact it will have at the source, in Siberia. These concerns – which cut across national borders and are shared by some Russians as well – are genuine, even if courts have dismissed them. On the other side of the ledger is that Nord Stream 2 could contribute to European energy transition, which is a claim advanced as well as contested.

The upshot may very well be that Nord Stream 2 is simply not special in this regard – no worse and no better than similar projects.

The politics and especially geopolitics of Nord Stream 2 – real, potential, and suspected – have been the single most prominent matter of debate.

On one side, depicting the project as purely or mostly a commercial enterprise has served its defense: something that has no or little politics, cannot be attacked for it. This has been, on the whole, the unconvincing default position of Berlin as well as Moscow.

On the other side, opponents of Nord Stream 2 have insisted on the project’s geopolitical potential to, as they claim, serve Russia’s interests and harm those of Ukraine, various eastern European EU members, or even the EU and NATO as a whole.

Pursuing this line of argument, however, Nord Stream critics have tended to overlook or deny two important facts. First, Ukraine’s (or Poland’s, for that matter) insistence on stopping Nord Stream 2 has, of course, also been through-and-through political. Namely, an outcome of how Ukraine’s leadership sees the country’s interests, rightly or wrongly.

To be clear, Ukraine, as a sovereign state, has every right to adopt such a policy – whether it is correct or mistaken. But some of the rhetoric of Nord Stream’s opponents implies that it also has a sort of natural right to demand that Germany and others follow its lead to protect what it defines as its interest, including billions in transit fees. That is nonsense, and friends of Ukraine would do Kiev a favor by being clear about that fact.

Second, Nord Stream 2 is so challenging because it has both genuine commercial aspects and geopolitical ones. Some of its opponents, again, have never been honest enough to acknowledge its economic side and end up caricaturing it as a purely political project.

In this respect, Russia stands accused of using energy as a weapon. In particular, opponents of the pipeline point to what they see as earlier cases of Russia using gas cut-offs to exert pressure. But the fact is that Nord Stream 2 is, if anything, likely to lessen such tendencies precisely because it circumvents land-based eastern European pipelines.

The case against it is based on the idea western Europe should tie its energy supply to, for instance, Ukraine’s interests. But, let’s be honest, the key concern, then, is not EU energy security but, quite on the contrary, entangling it with Ukraine’s policies – far from a safe proposition.

If Russia has used the “gas weapon” dozens of times already – as an observer at the Atlantic Council report – then it seems to be quite ineffective. Put differently, if Russia’s leverage by pipeline is so powerful, why is Ukraine more anti-Russian and linked into the West than ever before?

The real question about Nord Stream 2 has never been if it is political or not, in the sense of having political aspects, but what these effects are and could be. And, of course, how they can be managed best.

This brings us back to the current situation. Bitter Nord Stream 2 opponents may engage in the kind of excessive rhetoric that is now so fashionable. Yet, in reality, the actual conditions of the project’s completion are now as propitious as they can be. You may still disagree with this pragmatic outcome, but to caricature it as some kind of appeasement or “betrayal” only makes you look less than serious.