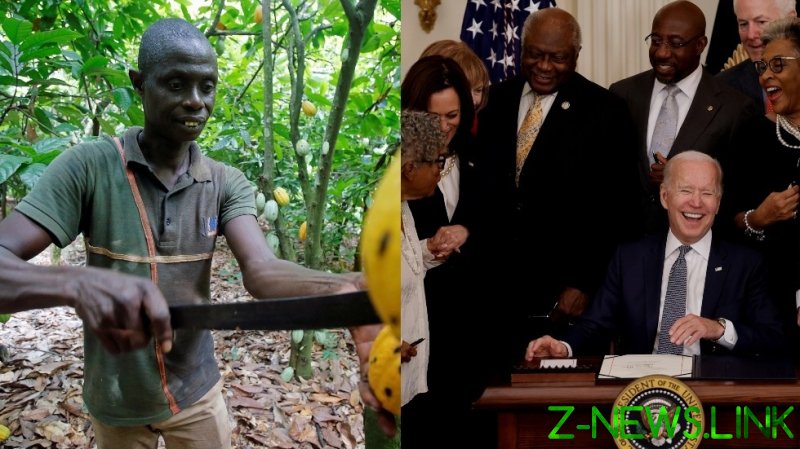 Its date, June 19, refers to the day when African-Americans in Galveston, Texas were informed slavery was over in 1865. It was adopted unanimously in the Senate and with only 14 House Republicans opposed, on grounds that it celebrated identity politics over unifying principles.

Mere hours earlier, eight justices of the US Supreme Court ruled in favor of Nestle and Cargill in the case known as Nestle USA v. Doe. The companies’ US branches were sued by six former slaves from Mali, who were trafficked to cocoa plantations in Cote D’Ivoire as children. There they had to work for long hours without pay and very little food, and were beaten with whips and switches, according to the lawsuit.

Nestle and Cargill “do not own or operate” plantations in Ivory Coast, but “do buy cocoa from farms located there and provide those farms with technical and financial resources,” the Supreme Court acknowledged.

However, they agreed the lawsuit was “an impermissible extraterritorial application” of the Alien Tort Statute (ATS), since the “respondents’ injuries occurred overseas and the only domestic conduct alleged by respondents was general corporate activity.”

The ATS, also known as the Alien Tort Claims Act (ATCA), is a law that goes back to 1789 and the earliest days of the US judiciary.

The case was originally filed in 2005, before a federal judge in California who dismissed it. The Ninth Circuit Court of Appeals reversed the judgment, and the case made it to the highest court in the land. The sole dissenting voice was the conservative-leaning Justice Samuel Alito, who said he would have sent the case back to the lower courts.

Terry Collingsworth of International Rights Advocates, the group that filed the suit, called the outcome “a heavily divided opinion with an unclear result,” and said they would seek leave to refile it in such a way that it would meet the standard cited by the majority – as established by the 2013 case Kiobel v. Royal Dutch Petroleum Co.

Collingsworth added that he hopes Nestle and Cargill would use their resources to stop relying on child labor, as they pledged to do in 2001, “rather than fight this for several more years and spend additional millions of dollars on lawyers, lobbyists and public relations firms.”

One of those lawyers is Neal Katyal, now partner at the Washington, DC law firm Hogan Lovells and previously the acting US solicitor general – the top attorney who represents the government before SCOTUS – under President Barack Obama. He also helped the Democrats with numerous cases against former President Donald Trump and even wrote a book making the case for his impeachment.

“True wrongdoers are the Malian and Ivorian traffickers, and overseers” who injured the plaintiffs in Africa, Katyal had argued, describing the case as a “15-year-old lawsuit brought against the wrong defendant, in the wrong place, and under the wrong statute.”

An attorney going by ‘Respectable Lawyer’ – with over 175,000 Twitter followers – disagreed, however, saying that both Katyal and the justices do support child slavery and disregarded corporate conduct in “funding, training, and overseeing the slave plantations,” thereby “ripping the teeth out of the Alien Tort Statute and preventing accountability in US courts.”

Calling the opinion “repulsive,” the anonymous attorney also claimed it “provides a road map for American importers to procure resources through slavery with legal impunity.”

Nestle also trended on Twitter, with hundreds of accounts – mainly #Resistance and Democrat activists – proclaiming they would boycott the company in protest going forward. That may prove a difficult prospect, however, as Nestle and Cargill – the latter a private company registered in Biden’s home state of Delaware – control much of the commercially available food supply in the US.

The irony of corporate America issuing statements celebrating Juneteenth, while relying on labor and supply chains that involve slavery right now, wasn’t lost on some commentators.