Home / WORLD / As the West stokes fears the Taliban might seize Pakistan’s nukes, declassified files hint at the CIA’s role in their acquisition

As the West stokes fears the Taliban might seize Pakistan’s nukes, declassified files hint at the CIA’s role in their acquisition 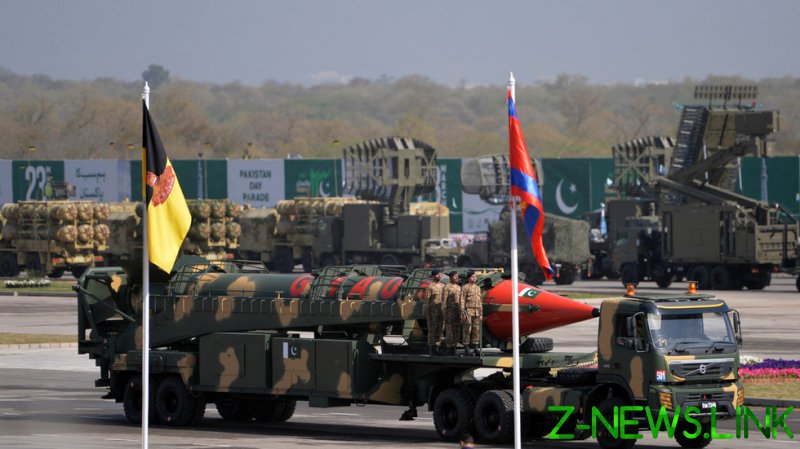 Since returning to power in Afghanistan, the Taliban has amassed a vast trove of US-made weaponry. The total value and size of the haul, and the question of whether the group can even in fact use the more high-tech equipment, has been hotly disputed.

Nonetheless, numerous US and UK officials, including Colonel Richard Kemp, who commanded the British Army in Afghanistan, and notorious former American national security advisor John Bolton, have expressed scaremongering concerns about an even more troubling prospect – the Taliban getting its hands on nuclear material from neighboring Pakistan.

The story of how Islamabad acquired nuclear weapons is quite extraordinary – and declassified documents newly-published by the National Security Archive shed significant further light on the tale, in the process raising questions about the Central Intelligence Agency’s role.

Pakistan’s push for nuclear weapons began in 1967, in response to India’s nuclear program, and became turbocharged in the wake of the Bangladesh Liberation War, in which Islamabad was comprehensively crushed, losing 150,000 square kilometers of territory as well as over half its population to the newly-independent state.

However, despite numerous public statements unambiguously underlining the country’s ambitions, the files suggest that the State Department only became sure of its nuclear aims in March 1978, and only then due to intelligence passed on by a UK diplomat.

They revealed that two years earlier, Pakistan bought inverters from a UK company, which London suspected “were destined for use in a centrifuge enrichment plant.” A recent repeat order reinforced those suspicions, but the diplomat believed it possible that there was “time to stop it developing further.” What officials did with this information isn’t known, although it’s somewhat inconceivable it wasn’t shared with the CIA in some fashion.

Despite this, the documents make clear the State Department was largely dependent on information provided by foreign sources to keep tabs on the program. It was only in January 1979 that officials had concrete confirmation Islamabad was enriching uranium using gas centrifuge technology, and an internal memo on what was known indicates a reliance on British and French intelligence. London had been aware for months by that point Islamabad could “acquire sufficient fissile material for a single device by 1981 at the earliest,” yet the White House was seemingly startled by Pakistan’s progress.

This surprise is baffling, given the CIA was well-positioned to keep an extremely close eye on sensitive Pakistani government communications at this time. Islamabad was one of a large number of countries to use encryption devices supplied by Swiss firm Crypto AG to shield its high-level diplomatic transmissions from prying eyes. Little did any of the machines’ purchasers know, the company was secretly owned by the CIA, and West German intelligence. This connivance meant the pair – and the National Security Agency and Britain’s GCHQ – could easily decode any messages sent via Crypto AG devices.

It’s likely that a great many messages related to the covert and illegal nuclear weapons program were exchanged using these machines, given that the effort was highly international in nature. Central to this conspiracy was Abdul Qadeer Khan, a Belgian-educated metallurgist, who had stolen gas centrifuge technology while working in the Netherlands for Anglo-Dutch-German consortium URENCO. He then began using his overseas contacts to source sensitive machinery from all over Europe, which would allow Islamabad to develop nukes.

Khan’s activities in the Netherlands had attracted some attention, and authorities moved to arrest him in 1975. However, former Dutch Prime Minister Ruud Lubbers claims that the CIA specifically intervened to prevent his prosecution, on the basis the Agency wished to monitor him and his contacts, indicating Langley had been aware of Khan, and his mission, for years by February 1979, the first time he’s referenced in declassified State Department cables.

Khan returned to Pakistan three years earlier, and former CIA director George Tenet has boasted, “we were inside his residence, inside his facilities, inside his rooms.” Yet, this supremely intimate insight somehow didn’t result in Langley torpedoing Pakistan’s nuclear ambitions, despite President Carter’s administration being so desperate in that regard, it was internally proposed to “buy the Pakistanis off [with] a combination of aid, debt rescheduling and arms,” a strategy it was acknowledged would set the “worst possible precedent in any future cases.”

The CIA also apparently didn’t detect Khan’s creation of a “nuclear supermarket” under its nose, through which he sold the foundational components of nuclear weapons to a variety of foreign governments, including Saudi Arabia, let alone subvert its operation. This is widely portrayed as a mere, if major, intelligence failure on the CIA’s part. An alternative explanation, never seemingly hitherto entertained, is that the Agency approved of Khan’s activities, wanted him to proceed, and actively shielded him from other prying eyes in Washington.

His supermarket remained in operation for many years – in the meantime, he began serving as an official adviser to the Pakistani government on science and technology, and became a much-loved public figure in the country. In 1998, he became celebrated as ‘Mohsin e-Pakistan’ (Saviour of Pakistan), after the country detonated six nuclear bombs at a test site.

Five years later though, the George Bush administration turned over evidence of Khan’s involvement in a global proliferation network to Islamabad, and the next year he was dismissed from his post. He also confessed to his role in the ring. Despite claiming to have acted alone, Sweden’s Weapons of Mass Destruction Commission, headed by Hans Blix, contends Khan couldn’t have operated “without the awareness of the Pakistan government,” a position shared by US officials and the International Atomic Energy Agency, which has repeatedly called for Khan to be interrogated on the question.

These demands have consistently been dismissed by Islamabad, although he has fallen out of favor with authorities in recent years, spending an extended period under house arrest after publicly accusing a number of high-ranking Pakistani officials of sanctioning and directing his proliferation work. In 2020, he alleged security forces personnel installed in the house next door to his own blocked him from meeting relatives, friends and lawyers.

In August this year, Khan contracted Covid-19, and was moved to hospital after his health rapidly deteriorated. A great many, both in Islamabad and Washington, are surely hoping he takes certain secrets to the grave. After all, if the Taliban does acquire nuclear technology, it might represent the gravest example of CIA ‘blowback’yet identified.