As the French military attack Macron with SECOND ‘civil war’ warning, how really likely is an Islamist-fuelled internal conflict? 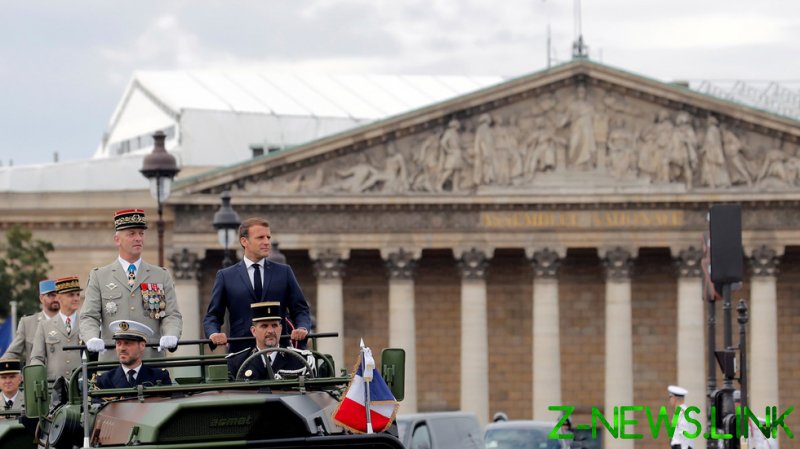 A president receiving one letter from military men warning of an impending civil war over radical Islam is a rare enough event… so to get two in just over two weeks is some feat.

Having brushed aside the first, from 20 retired generals warning of an internal conflict over continuing concessions to Islamists, as the work of a bunch of irrelevant pensioners, President Emmanuel Macron needs a more considered approach to the latest salvo from a disgruntled armed forces.

Because the letter published in ‘Valeurs Actuelles’ at the weekend on behalf of an indeterminate number of young, serving soldiers, attracted support from nearly 250,000 members of the public in just over 24 hours.

Like those before them, the message of this new missive is clear: “Civil war is brewing in France and you know it perfectly well.”

The difference this time around is that those behind the complaints published by the magazine are not a bunch of semi-retired generals, but serving soldiers from France’s so-called ‘Generation of Fire’.

They are among those who have seen recent active duty, directly tacking Islamic extremists at home and abroad: as part of the 5,000-strong French military contingent fighting ISIS alongside the G5 Sahel nations of Burkina Faso, Chad, Mali, Mauritania and Niger, among the 23,000 troops that served in Afghanistan, or those who are part of the ongoing Operation Sentinelle that has deployed 10,000 soldiers and 4,700 police and gendarmes on French soil in response to the shocking terrorist attacks of 2015.

They are not redundant armchair strategists. They are serving military. And they are extremely angry and pissed off.

They cannot simply be dismissed as radical right-wing racists or anti-Islamists. They are the backbone of the French armed forces and deserve to be heard. As Valeurs makes clear, the idea of creating this platform for their voices to be heard “is not to undermine our institutions but to alert people to the gravity of the situation.”

As a result, the new letter contains none of the inflammatory language of its precursor. Gone are the accusations that Macron is undermining “the intervention of our active comrades in a perilous mission of protecting our civilisational values ​​and safeguarding our compatriots on national territory.” Gone is the rhetoric denouncing “those who despise our country, its traditions, its culture, and want to see it dissolve by taking away its past and its history,” and gone is the talk of Islamic “hordes” in the banlieues.

But just because the language has been toned down, that doesn’t mean the sentiment is any less strong.

The French government was quick to call in the big guns once the online letter landed. Interior Minister Geraland Darmanin labelled it a “crude manoeuvre,” while Prime Minister Jean Castex claimed, “It is a political platform of the extreme right, let’s call a spade a spade.” In the same vein, Defence Minister Florence Parly shrugged off the letter as “part of a crude political scheme. It uses all the rhetoric, the vocabulary, the tone, the references which are those of the extreme right.”

And they clearly attempted to play down talk of a military-led revolt, saying, “If a civil war breaks out, the army will maintain order on its own soil, because it will be asked to. It is even the definition of civil war. No one can want such a terrible situation, our elders no more than us…”

National Rally leader Marine Le Pen, who was condemned by opponents for giving oxygen to the idea of “civil war” mooted in the original letter, defended the new authors, saying, “It is clearly not a call to insurrection, otherwise I would not be supporting it.”

But with just 11 months to go to next year’s presidential election, Le Pen, who’s been gaining ground in the polls recently, will be loving Macron’s discomfort on this issue, which is meat and drink to her campaign.

The president followed up the first letter with a witch-hunt through the military to weed out those serving officers who dared express a political opinion that was deemed inappropriate to their position. More than likely, another investigation will follow the publication of this second letter.

To think that rooting out and punishing those who dare to express an opinion, one that many ordinary French citizens share, will make the issue go away is foolish and will only convince those brave enough to put their heads above the trenches that the problems they identify extend into the ranks of those who lead them.

By refusing to engage and to accept that these young soldiers have a point, Macron is wholly culpable for whatever happens next. It is unlikely to come to a civil war, but it may well lead to bloodshed and to some even darker days ahead for the Republic.