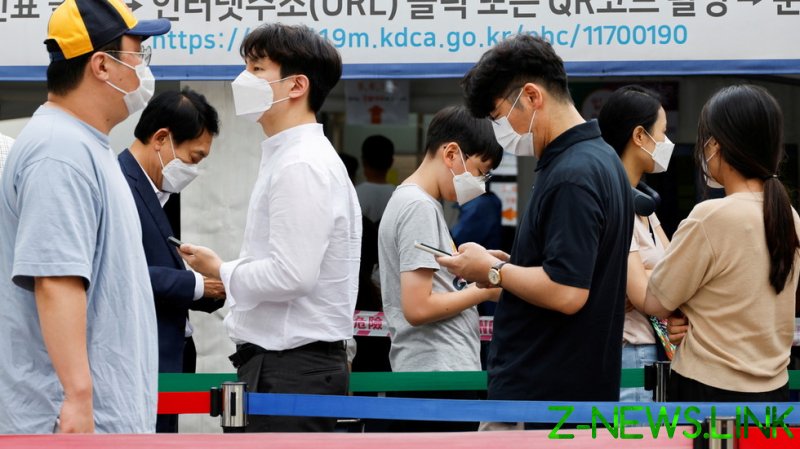 The ‘Level 4’ social distancing rules – the most restrictive under South Korean public health guidelines – were announced on Friday for Seoul and the neighboring densely populated Gyeonggi Province and Incheon. The decision was taken following a meeting of officials from several governmental agencies chaired by Prime Minister Kim Boo-kyum, Yonhap news agency reported.

As such, for at least two weeks from Monday, most public gatherings in the Seoul Capital Area will be banned, while private events will be heavily restricted. There will be no in-person classes at schools or partying in nightclubs. Restaurants will have to observe a dine-in curfew starting at 10pm. Weddings and funerals will be limited to relatives only.

“Antivirus measures have reached their maximum crisis level, with record high new daily Covid-19 cases being renewed for several days,” the prime minister said, explaining the decision. The government has even suspended incentive measures for vaccinated people, who currently have some extra leeway in their daily lives, for the duration of the crisis.

The semi-lockdown was imposed in an attempt to curb Covid-19 infections, which have surged significantly since the contagious Delta variant of the virus causing the disease reached South Korea. New daily infections have broken national records for three days in a row and are now at the highest level since the first case of Covid-19 was identified in January last year.

The Korea Disease Control and Prevention Agency (KDCA) recorded 1,316 new cases on Friday, including 1,236 local infections. About 80 percent of the patients came from Seoul and its neighboring areas.

Overwhelmingly the disease affects people in their 20s and 30s, who are not yet eligible for vaccinations. The KDCA says 30.2% of the country’s population have received at least one vaccine shot so far, with only 11% fully vaccinated.

Health Minister Kwon Deok-cheol warned South Koreans that the unfolding fourth wave of Covid-19 may last for a “considerable period of time.” In the worst-case scenario, the KDCA expects daily cases to reach as much as 2,140 in July.

Prime Minister Kim offered an apology to small business owners, who will suffer most financially from the restrictions. “It will be difficult to completely make up for the damage, but the government will do its best to provide the utmost support through a micro enterprise support act,” he said.