Home / WORLD / As she backs Churchill’s cancellation, it’s time to ask: is Queen of Woke Jacinda Ardern the world’s most insufferable leader?

As she backs Churchill’s cancellation, it’s time to ask: is Queen of Woke Jacinda Ardern the world’s most insufferable leader? 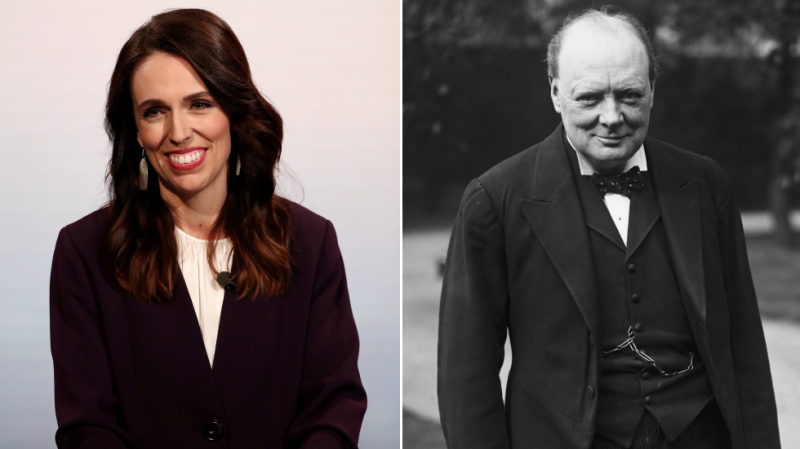 New Zealand’s parliament has taken the extraordinary decision to remove a portrait of Sir Winston Churchill from its public gallery. As a result, he will now be hidden away from the public like some shameful reminder of the past. Not glorious, as he once was, but an embarrassment who is out of kilter with ‘modern day’ opinions and attitudes.

Unsurprisingly, the move was precipitated by the Greens, who are in coalition government with Jacinda Ardern’s Labour Party. Indeed, Ardern said she “didn’t care” about the removal of the portrait. She added: “I care about what we do in this place [parliament] – we have got a responsibility to look after New Zealand in the massive crisis that we are facing.”

Luckily, there seems to be someone talking a bit of sense in New Zealand’s parliament. The leader of the Opposition, Judith Collins, said Churchill “belongs in parliament because, if you know your history, he was one of the very few political leaders who were prepared to stand up to the Nazis and fascists in World War 2.” She continued, “I just think the Greens are uninformed by history. What do they want him replaced with – do they want Stalin up there?”

Well sadly, she might not be too far from the truth there, as Ardern is the former president of the International Union of Socialist Youth. And after all, Churchill did say in 1948 that “socialism is the philosophy of failure, the creed of ignorance, and the gospel of envy.” I can’t see that sitting well with Ardern and her Green allies.

However, this is not the first time the legacy of Britain’s great wartime leader has been besmirched by a foreign leader. Indeed, one of the first things Barack Obama did when he became the US President was to have a bust of Churchill removed from the Oval Office. When Donald Trump entered the White House, he had the bust returned, only for Joe Biden to have it removed again.

I must say that I am not surprised this has happened in New Zealand because the country is run by a woke zealot in Ardern. I regularly roll my eyes when she pops up on the TV, as I find her excruciatingly bad. If there is a woke cause, you can guarantee that, like an overgrown student, she will be at its vanguard. Whether it is climate alarmism or apologising for past misdemeanours, she’ll be there. It’s no wonder she has become the darling of the metropolitan liberal left around the world.

Her latest hobby-horse is an attempt to push through ‘hate speech’ laws, which seem to be so popular with left-wing governments at the moment (see Scotland for an example of this). In response, David Seymour, the leader of New Zealand’s ACT party, has claimed that Ardern’s proposals, which widen the scope of hate speech and increase fines and sentences, will “put cancel culture on steroids” and only benefit the “Twitter mob and the perpetually offended.”

What sticks in my craw about all this is Ardern’s rank hypocrisy, as her wokeness does not extend to China, with whom she is more than happy to deal. For example, last year she broke with New Zealand’s traditional allies to prioritise trade with Beijing. It led to questions being asked about whether her country could remain in the Five Eyes intelligence network, which consists of the UK, US, Canada, Australia and New Zealand. Indeed, the Daily Telegraph was so infuriated by her actions that it labelled her the “West’s woke weak link.”

Now I don’t condemn Ardern for putting the interests of her own country first. After all, that’s what Brexit was all about. However, it seems odd to me that someone who apologises for her own country’s crackdown on South Pacific island immigrants in the 1970s, is prepared to turn a blind-eye to Beijing’s suppression of civil liberties in Hong Kong and the disgraceful treatment of the Uighur Muslims. Yet no one on the left picks her up on this. For some reason, and we all know why really, she gets a free pass.

Ardern’s hypocrisy was also on display recently when she played the climate alarmist card. In June, she announced that the world was facing a “life or death” scenario if governments did not enact policies to deal with climate change. Yet she is happy to deal with a country that is building the equivalent of a coal fired power station every single week. Now come on, you can’t have it both ways. You can’t claim to be at the forefront of fighting climate change whilst cosying up to the world’s biggest polluter!

Anyway, back to Churchill. If it weren’t for him and his determination to stand up to Nazism, the world would be a very different place now, and a far worse one at that. And who knows, New Zealanders could now be living under the jackboot of Japanese tyranny. He was also a far greater man than those politicians who he seems to offend in New Zealand’s parliament.

I think it’s time that these modern day politicians showed the great man a bit of respect. He was not perfect, but then again, who is? He was a man of his age and his opinions and actions reflected that. Indeed, attempting to impose today’s opinions on historical figures, as many on the left do, is just childish.

What is not up for debate, however, is that the world, including New Zealand, owes Churchill a great debt. And he will be revered long after this obsession with wokeness has passed and politicians like Ardern have thankfully left the stage.