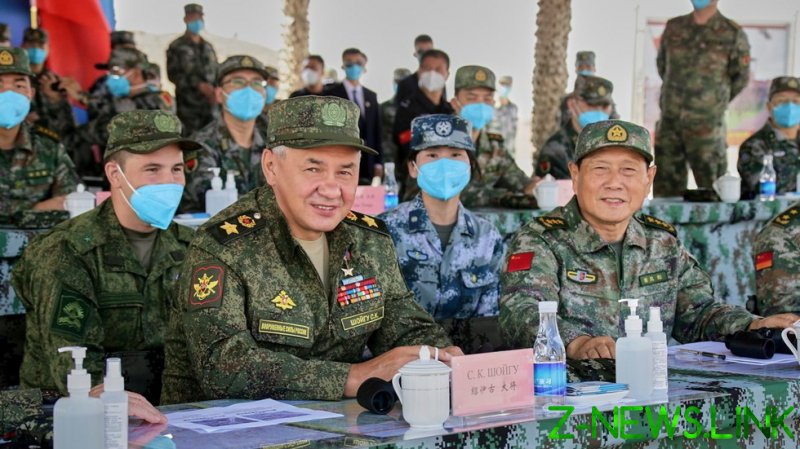 Hosted in West China’s Ningxia Hui Autonomous Region, the drills, which concluded on Friday, involved a total of 10,000 troops dispatched by both sides, mostly from China’s PLA Western Theater Command and Russia’s Eastern Military District. However, as well as bolstering inter-operability and learning to co-ordinate actions, the maneuvers also took place against the backdrop of deepening Sino-Russian relations, and both sides have “agreed that the exercise fully reflects the high level of friendly and cooperative relations between the two militaries, as well as the great responsibility to jointly maintain regional peace and security,” according to a statement released by Beijing.

For Russia, the exercises in China are part of a larger showcase, which will continue with the Zapad-2021 CSTO (Collective Security Treaty Organization) drills in Belarus from September 10-16. Approximately 12,800 troops are expected to participate in Zapad-2021.

Meanwhile, Western observers are taking note of the fledgling Sino-Russian defense partnership, albeit with skepticism over whether either side is really ready to commit to a deeper relationship. Concerns over such an alliance have coalesced into a ‘pragmatic’ strategy that is increasingly being taken on by Washington’s Foreign Policy establishment: drive a wedge between Russia and China to weaken the American regime’s chief opposition.

Far from being a realist’s solution to a moment of crisis, the belief that the West can artificially sow division between Russia and China seems to be another retreat into Cold War thinking.

In January, the Atlantic Council published a strategy paper entitled “The Longer Telegram: Toward a new American China strategy,” which purports to have been written by an anonymous former senior government official and outlines the challenge that China poses to the United States, as well as how Washington might approach it.

Among its ten core principles, the paper advocates for a rebalancing of US-Russia relations. “Effectively reinforcing US alliances is critical. Dividing Russia from China in the future is equally so,” it argues. “Allowing Russia to drift fully into China’s strategic embrace over the last decade will go down as the single greatest geo-strategic error of successive US administrations.”

This sentiment reverberated during the summit between US President Joe Biden and his Russian counterpart, Vladimir Putin, in June. The meeting was a litmus test for the tone that Washington would take with Moscow in the future. At his post-summit press conference, President Biden remarked on Russia’s “multi-thousand-mile border with China” as a possible source of discomfort for Russia, given that “China is moving ahead, hellbent on election, as they say, seeking to be the most powerful economy in the world and the largest and the most powerful military in the world.” Coverage in outlets like The Global Times saw this as a clear attempt to generate discord between Russia and China.

In a more recent article titled “The Right Way to Split China and Russia” and published in Foreign Affairs magazine, Charles A. Kupchan, a Senior Fellow at the Council on Foreign Relations and a Georgetown professor, sets out his belief as to why Moscow and Beijing aren’t and shouldn’t be allied to one another, and how the US might push Russia to abandon its “bad marriage” with its Chinese neighbor.

According to Kupchan, what currently passes for Russia-China alliance-like relations is detrimentally asymmetrical due to China boasting significant advantages over Russia in terms of its economy, population size, and innovation. The Kremlin, Kupchan writes, is aware of these power realities and is increasingly worried about China making “deep inroads into Russia’s traditional sphere of influence in Central Asia” via projects such as the Belt and Road Initiative, which competes with the Eurasian Economic Union.

Russia puts up with this, the narrative goes, because its partnership with China is comparatively better than the prospect of being at the complete mercy of the West, which seeks to keep Russia under NATO pressure and involve itself in Russia’s internal political affairs. Still, the conclusion that Kupchan draws is that Russia “would be better off geopolitically and economically if it hedged against China and tilted toward the West.”

Turning to history, Kupchan uses the Sino-Soviet split of the 1960s and subsequent US conciliatory approach to China under President Nixon as case in point. The blueprint for Washington’s strategy, then, is to soften the West’s ideological rhetoric and cede some minor ground to Russian interests. On the subject of the Nord Stream 2 gas pipeline, for instance, Kupchan supports Biden’s decision to waive sanctions as closer economic interdependence between the EU and Russia might set the stage for Russia’s westward turn.

Kupchan concludes his piece by claiming that Washington’s efforts to successfully “manage China’s rise” and its ability to get Russia to apply strategic pressure on China will be important steps “toward building a pluralistic multipolar order and heading off Beijing’s potential efforts to construct a Sinocentric international system.” The choice of words here echoes, perhaps deliberately, the language of multipolarity that has informed Russia’s foreign policy worldview since the 1990s.

What is clear is that talking heads in the US, and even its Commander in Chief, are keen on undermining the Sino-Russian relationship, but whether it is doing so to bring about a multi-polar world order remains unclear.

Competing visions for a Multi-Polar World

The notion that Washington can separate Russia and China on the basis of their differences, as well as the appeal to multipolarity as the justification for such a policy, fatally misunderstands the actual implications of multipolar theory. As a way of conceptualizing and acting within international relations, multipolarity presupposes the existence of significant, even irreconcilable, differences between state actors.

Moments of cooperation and moments of competition are integral features of a fluid, multipolar paradigm, which guarantees that no single economic or national bloc, no single pole, rises to become a global hegemon. The Western liberal establishment has enjoyed hegemonic status at least since the end of the Cold War, and this has led to a power imbalance that is now being offset, in part by China’s rise to prominence and Russia’s resistance to Western pressures. Washington’s Foreign Policy will acknowledge this shift of the geopolitical center of gravity from west to east, though not as a tendency towards equilibrium.

On a similar note, the Foreign Affairs piece, which ostensibly champions pluralism, goes on to say that “Putin has long strengthened his grip at home by playing to Russian nationalism and standing up to the West. He and his apparatchiks might prove too set in their ways […]” In other words, Russia just doesn’t know what’s best for Russia, hence the article speaks in terms of “helping Russia help itself.”

If Washington seeks to promote genuine multipolarity, it will have to dispense with the ideological underpinnings of its crusade against Russia, and with its tendency to talk down to the country. For now, the supposed desire to assist Moscow to achieve strategic autonomy is obviously underpinned by an ulterior motive to contain China.