Home / WORLD / As protests grow against health passes, are elites imposing the measures making the same disdainful mistakes Remain did in 2016?

As protests grow against health passes, are elites imposing the measures making the same disdainful mistakes Remain did in 2016? 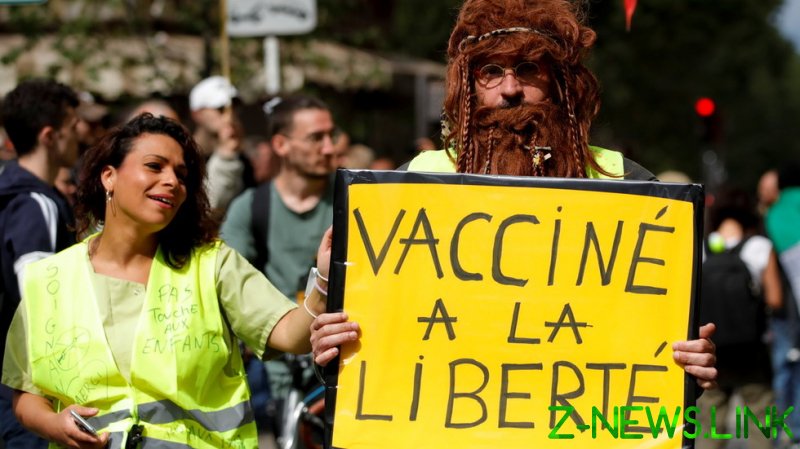 Protests have erupted again in a number of Europe’s major cities. The source is the rollout of Covid passports, which protesters claim creates two tiers of citizens – those who have been vaccinated (good) and those who have not (bad). Some protesters in Italy have gone as far to wear the Star of David to make their point. To compare Covid passports with the Nazi persecution of the Jews is just insensitive and silly, but I understand the point they are trying to make.

The two countries where the recent protests have been most prominent have been France and Italy. Last week, France’s parliament voted for a bill that will require a health pass for access to restaurants, bars, trains, and planes from August 9. Similarly, the Italian prime minister, Mario Draghi, announced that a Covid ‘Green Pass’ would be required by August 6 to dine at indoor tables in restaurants and bars, as well as for gaining access to museums, cinemas, gyms, swimming pools, and sports stadiums.

The backlash against the scheme in these countries has been large and vocal. Protesters in Berlin had running fights with police at the weekend. In France, anti-vax protests have taken place in all major cities, and are growing. More than 200,000 French people took to the streets, a rise of over 40,000 on the previous weekend’s numbers. Italy too has seen protests in Rome, Turin, and Milan in recent weeks.

One of the principal movers behind those protests has been the Brothers of Italy party. They are judged to be right-wing and populist, but they are polling at over 20% at the moment. Giorgia Meloni, the party’s charismatic leader, stated recently that she is not opposed to vaccines, but “against the obligation to vaccinate.” Moreover, last week, a number of her MPs staged a demonstration in the Italian parliament against Draghi’s ‘Green Pass’ scheme, which resulted in one of them being chased out of the chamber by security guards.

Not to be outflanked by Meloni, Matteo Salvini, the leader of Italy’s established right-wing party, Lega Nord, announced his opposition to the compulsory vaccination of young people and teachers. He said, “talking about making 13-14-year-olds and teachers get vaccinated is not part of my way of thinking about a free country.” It seems that in Italy, opposition to the Green Pass and compulsory vaccination has become a battle cry for the Right, with both Meloni and Salvini competing for the anti-vaxxer vote.

Something similar has been happening in France. One of the main instigators of the anti-Covid passport protests has been Florian Philippot, the former right-hand-man of Marine Le Pen and now the leader of The Patriots party. Philippot has been addressing anti-vax rallies in Paris and called the protests “power of the people” in the face of a “disgrace.” Interestingly, he announced last month that he would be standing in next year’s presidential election.

Unsurprisingly, Le Pen has now entered the fray, posting a video stating her opposition to Macron’s Covid passports. She stated that “these measures appear to be disproportionate in principle, brutal in their implementation and frankly sometimes absurd.” She continued that “we believe that vaccination should remain a personal choice which leaves everyone the right to assess the risk-benefit balance in relation to their own situation.”

This is a high-risk game for the politicians on the right. The take-up of vaccines has risen sharply in France and Italy since the introduction of Covid passports. When first announced in France, nearly 1 million residents booked an appointment in a single day. In Italy, more than 150,000 people booked slots to get vaccinated in the 24 hours following Draghi’s announcement.  It seems that the desire to visit the cinema, the bar, or a restaurant trumps all other arguments.

The response to the protests from the establishment has been laced with the usual dismissive arrogance. For example, even when calling for ‘unity’, President Macron could not help having a dig at those behind the protests, stating that they are “people who are in the business of irrational, sometimes cynical, manipulative mobilization.”  Macron is insinuating, as the British establishment did after Brexit, that the public are being duped by sinister forces. My guess is that Russia will probably be blamed next… it usually is.

I can see parallels here with the criticism levelled at those of us who called for Brexit long before it was fashionable. Indeed, back in 2006, David Cameron called us a “bunch of fruitcakes and loonies and closet racists.” I would argue that it was this kind of dismissive establishment arrogance that led to Brexit, and similar sentiments could lead to the anti-vax movements moving into the political mainstream.

I am pro the vaccines, and would urge all people to get them. I have recently had Covid, and I can tell you it is not a pleasant experience. I am a relatively fit 44-year-old who regularly goes to the gym, and I genuinely believe that if I had not had one vaccination, I would probably have ended up in hospital. However, at the same time, I do not want to see people forced into having a vaccination if they do not want it. After all, one’s body is not the property of the state. People should therefore be encouraged to be vaccinated, not coerced.

Only time will tell whether these protests are a momentary flash in the pan, or if they represent a larger shift in political discourse. What I would say is that it is a mistake for establishment figures to paint the protesters as conspiratorial cranks. They tried this with Brexit, and it failed. However, I also think that it is a risky strategy for the right to be so vocal in their support for these protests. If the majority of people accept Covid passports as the new normal, which I believe reluctantly they will, then Le Pen, Salvini and Meloni could suffer at the ballot box at the next elections.