Home / WORLD / As our (un)civil war escalates towards the real thing, America is in throes of unrest unlike any in our 244-year history

As our (un)civil war escalates towards the real thing, America is in throes of unrest unlike any in our 244-year history 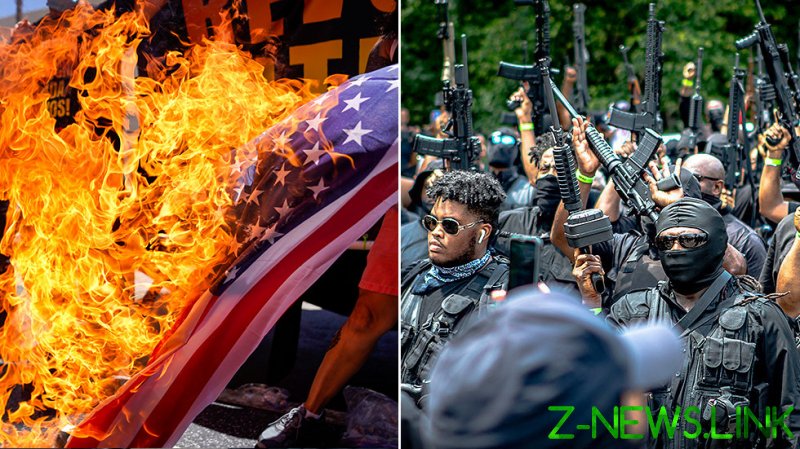 The American left and right no longer inhabit a common moral universe. In fact, that imagined universe does not exist. The old, cherished political notions no longer apply, if they ever did. Not only are the terms ‘left’ and ‘right’ complete misnomers under the current configuration, but the players are not as they seem, or as they are made out to seem.

First, Trump is hardly the stereotypical right-wing despot that the ‘resistance’ makes him out to be, his rough demeanor and coarse rhetoric notwithstanding. At the same time, the Democrats are hardly the vaunted champions of the ‘working class’ as imagined under the old dispensation. Instead, the resistance to Trump is actually led by an entrenched political establishment, although their supporters apparently remain unimpressed by this minor detail.

Take a look at this ironic and unlikely political alignment. It should go a long way toward understanding the perturbations throwing the nation into convulsions. The resistance includes the Democratic Party machine, the loyal Democratic Party voters, the ‘never-Trumpers’ among the Republican establishment, the permanent bureaucracy or ‘deep state’, the riotous Antifa and Black Lives Matter foot soldiers, and, but for a few isolated and dwindling islands, the entirety of the mainstream media. Given its uncontested hegemony, this establishment-backed resistance inhabits a parallel universe of its own making and projects a fabricated simulacrum as reality.

The resistance establishment controls the official narrative, which includes a few prominent elements: the tropes that Trump is an inveterate liar, a huckster profiting from his incumbency, and a criminal who is committing unspeakable (and undiscoverable) crimes against the nation and humanity at large. Nancy Pelosi (D-CA), the Speaker of the House, went so far as to call Trump, the sitting president, an “enemy of the state.” This establishment resistance routinely declares Trump a dictator. It now asserts as an incontrovertible article of faith that he will refuse to vacate the White House should he lose the upcoming election.

The death of civility

Despite its own chicanery and possible criminality, the resistance establishment is so sure that its success is guaranteed that Hillary Clinton boldly urged Joe Biden not to concede the election under any circumstances. Rumors have even been floated that a contingent of military generals are prepared to remove Trump from the presidential domicile, if or when it comes to that. And now, since Trump contracted the coronavirus, Democratic Party leaders, a frothing media, and ardent party supporters have been unable to contain their glee at the prospect of his early demise.

As an indication that ‘civility’ is a thing of the past, one may point to the recent spate of tweets by Trump haters openly wishing for his death by Covid. Such posts became so prevalent and glaring that Twitter was forced to introduce a new policy declaring that any tweets wishing for the death of a politician would be removed. Conspicuously missing was any mention of even temporarily banning tweeters who infringe the policy. Such banning is routine for pro-Trump posters – and for far lesser infractions – if they are not contrived by the tech giant in the first place.

Meanwhile, Trump supporters are routinely caricatured as a reactionary and irredeemably racist band of blind loyalists, including a significant contingent of white supremacists willing and already engaging in acts of racist violence. Even as Antifa and Black Lives Matter rampage and riot, leaving rubble in their wake, rightwing extremists, we are told, are the greatest domestic threat to national tranquility.

At the same time, Trump Republicans and their few allies in an otherwise overwhelmingly Democrat-favored corporate media point to a growing body of evidence that a coup has been ongoing since before Trump assumed power. The director of national intelligence, John Ratcliffe, recently alleged in a letter published by Sen. Lindsey Graham (R-SC), just hours before the first (and perhaps last) presidential debate, that Hillary Clinton orchestrated “a campaign plan to stir up a scandal” – by linking Trump to Russia in 2016. The letter also claims that then-President Barack Obama knew about her intent and role in the contrived affair and did nothing to prevent his former secretary of state from ordering up the concoction.

While the resistance hurls an endless series of increasingly outrageous accusations and epithets at Trump, pro-Trump forces in the state nevertheless continue to pile up dirt on the Democrats and their assets in the permanent bureaucracy. For example, the Senate Judiciary Committee’s investigations into the ‘Crossfire Hurricane’ investigation of the Trump team’s supposed collusion with Russia has revealed evidence that a Russian asset, suspected by the CIA of being a spy, was the underlying source for the “dirty dossier” that prompted the FBI investigation. The committee has pointed to evidence that former FBI Director James Comey knew the dossier was unsubstantiated garbage peddled by a gutter-sniping mercenary hack when he or his staff members submitted FISA applications.

Added to this, the Department of Justice has since reported that more than two dozen phones belonging to members of Special Counsel Robert Mueller’s team were “accidentally” wiped clean of data before the Justice Department’s inspector general could comb them for records.

Ironically, the Senate Judiciary Committee has also asserted that the son of former VP and current presidential candidate Joe Biden, namely Hunter Biden, actually engaged in a kind of ‘Russian collusion’ – when he received a whopping 3.5 million dollars from Elena Baturina, the wife of the corrupt former mayor of Moscow. Hunter Biden then allegedly funneled a part of these funds into human trafficking and prostitution rings. This alleged swindle, gained on the basis of his father’s influence peddling, would be added to the vast sums reportedly collected from corrupt oligarchs in Ukraine, China, and elsewhere.

All of these claims are either scoffed at and deemed conspiracies prima facie, or simply memory-holed by a complicit press. Nothing, it appears, will ever come of any of them.

Meanwhile, the vastly outflanked pro-Trump camp maintains that the attempted coup extends to the upcoming presidential election. Fears are escalating that the Democratic Party’s election machinery has already been set in motion, harvesting fraudulent or otherwise invalid mail-in ballots in favor of Biden. These deep misgivings are compounded by early reports of dumped and discarded ballots for Trump.

Anarchy in the USA

Among the ground forces in both camps, some informed and some merely inflamed by baseless rhetoric, hostility has reached fever pitch. According to Georgetown University’s Institute of Politics and Public Service, 83 percent of Americans believe that behavior once considered unacceptable is now deemed acceptable in the political sphere. Apparently, this behavior includes violence and threats of violence. Other studies found that 61 percent Americans polled believe the country is headed inexorably towards civil war. Other reports indicate that a nearly equal number of Democrats and Republicans (33 percent and 34 percent, respectively) believe that violence will be justified if their side loses the impending presidential election, up from just eight percent on both sides who believed that three years ago.

The ‘left’ justifies its campaign of violence given the supposedly disproportionate unjustified police violence against blacks. The ‘right’ justifies its pondered response as necessary self-defense and defense of the nation after months of almost unhampered rampages.

Surging gun sales across the country suggest that many Americans fear continued and increasing conflict. First-time gun and ammunition purchases have reached an all-time high. One might reasonably suppose that potential counter measures from pro-Trump ground forces are being seriously contemplated. The prospect of a protracted election controversy has both camps suggesting that they’re booted up and ready for action. Any state response to such action, on the other hand, remains unclear. Who, after all, will have the authority to direct state police forces if Democrats and their supporters claim that Trump’s ‘occupation’ of the White House is illegitimate?

Pro-Trump pundits warn that the violence coming from ‘leftists’ since May has only been a warm-up act for November 3 and beyond. There are so many related and somewhat disparate theories being floated that one’s head is left spinning. But suffice to say, anyone the least bit cognizant of the state of affairs is bracing for a massive confrontation.

The current and looming strife is demoralizing in the extreme, especially given the utterly incommensurable accounts held by the opposing sides. It is especially alarming to me, living as I do in urban Pennsylvania – a ‘swing state’ with the potential to be a center of a disputed election result that looks to tip over into open mortal combat. I plan on voting in the early morning, then driving immediately to another, probably uncontested, state.

The alarming state of affairs has led me to revisit a harrowing poem by William Butler Yeats, ‘The Second Coming’. The first stanza captures the temper and pitch of the moment so well that I quote in its entirety:

Turning and turning in the widening gyre

The falcon cannot hear the falconer;

Mere anarchy is loosed upon the world,

The blood-dimmed tide is loosed, and everywhere

The ceremony of innocence is drowned;

The best lack all conviction, while the worst

Are full of passionate intensity.

I met my first grandchild for the first time the other day. And I wept with trepidation for his future.