As more than a dozen foreign diplomats attend Navalny trial, West must resist temptation to interfere in Russian affairs – Kremlin 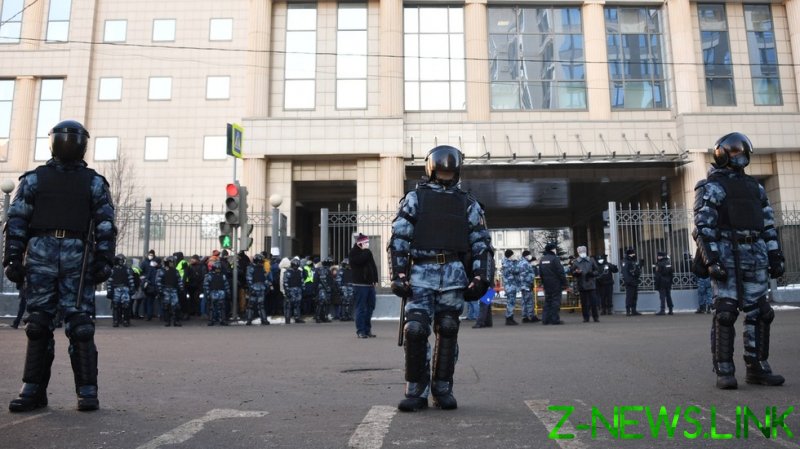 A video taken outside Moscow City Court, where the activist is standing trial on charges of violating a suspended sentence, showed a line of black diplomatic vehicles registered to embassies in the Russian capital. At least 20 separate representatives of foreign missions were reportedly in attendance for the hearing, where prosecutors are seeking to sentence the opposition activist to three and a half years behind bars.

Foreign Ministry spokeswoman Maria Zakharova wrote on Facebook later on Tuesday that diplomats from the US, UK, Poland, Latvia, Lithuania, and Austria had turned out to observe the proceedings.

In the statement, she said she understood that “traditionally diplomats in foreign courts support their citizens. Even if Westerners view Navalny as one of ‘their own’, he is a citizen of the Russian Federation.” Zakharova went on to say that “This is no longer just interference in the internal affairs of a sovereign state. It is a self-disclosure of the unsightly and illegal role of the collective West in trying to contain Russia.”

The Foreign Ministry spokeswoman added that she was concerned about the message the presence of international delegations sent to the Russian justice system, asking “is it an attempt at psychological pressure on the judge?” She concluded, “I cannot rule out that they are there to oversee the fate of the NATO (British and American) millions pumped into illegal activities on Russian territory.”

Russian President Vladimir Putin’s spokesman, Dmitry Peskov, also expressed concern over attendance in the courtroom. He told reporters later on Tuesday that the diplomats “are free to act within the framework of the Vienna Convention on Diplomatic Relations, but not outside it. And, of course, diplomats should not in any way interfere in the internal affairs of Russia or allow any actions that would somehow try to put pressure on an independent court.”

The British Embassy in Moscow has since said that the presence of its representatives at the trial was in line with normal diplomatic protocols.

Later on Tuesday, Zakharova’s boss, Foreign Minister Sergey Lavrov, told a press conference that he had serious doubts over the facts put forward by Navalny around his alleged poisoning with the nerve agent Novichok. “We have no information that would actually prove the validity of the accusations against the Russian leadership, because it was not provided to us,” he said.

“If you accuse someone, then prove your guilt. But if you say you won’t tell us anything, because it’s secret, or because [Navalny] himself does not allow it, we have every reason to believe that it was staged.”

The Moscow protest leader has previously claimed that the highest levels of the Russian state were involved in his alleged poisoning in the Siberian city of Tomsk. However, Russia has said EU nations have repeatedly refused requests for samples of chemical weapons supposedly taken as evidence.

Navalny was arrested after landing at Moscow’s Sheremetyevo Airport earlier in January. He had flown home from Berlin, where he had been transferred in a comatose state. He is accused of violating the terms of his three-and-a-half-year suspended sentence for fraud against the French company Yves Rocher.