Home / WORLD / As more and more black people are jailed in Britain, the so-called ‘fairness’ of the UK legal system is exposed for all to see

As more and more black people are jailed in Britain, the so-called ‘fairness’ of the UK legal system is exposed for all to see 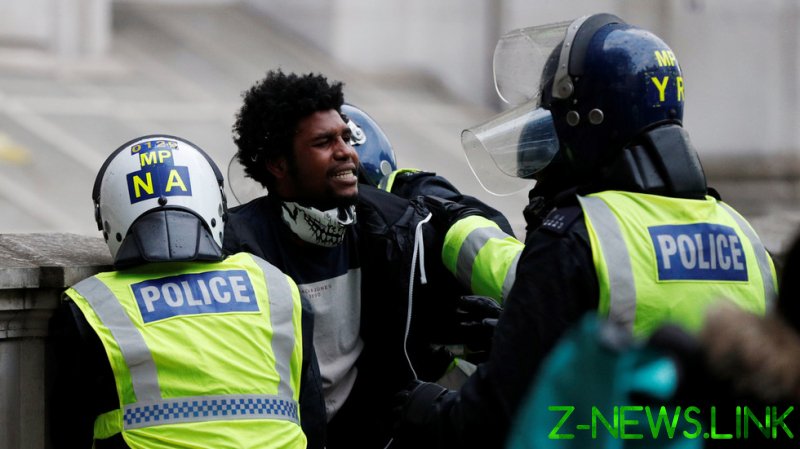 I’ve lost count of the number of times I’ve been to jail – as a visitor, that is. Whether interviewing terrorists languishing at ‘her majesty’s pleasure,’ interrogating war criminals in Sierra Leone or hopping on a gurney inside Mississippi State Penitentiary’s lethal injection chamber, I’ve seen enough of the global penal system to know that, despite what the average Sun reader thinks, prison is no ‘holiday camp.’

Even in sleepy Britain, where cynics view ‘doing bird’ as akin to a city break or a spell at boarding school, people forget that the primary purpose of prison is to protect the public from dishonest and dangerous miscreants while denying said culprits of a basic human need: freedom.

Basic punishment aside, having spoken to countless staff inside British jails – from seasoned governors to fresh-faced newbie prison officers – all seem in favour of rehabilitative programmes that can help keep the majority of their 84,000 ‘clients’ from becoming recidivists. As over 60 percent of prisoners serving a sentence of less than 12 months reoffend within a year of release, it’s obvious that Britain’s jails aren’t exactly overpopulated with master criminals. But expecting a short-staffed and under-resourced prison service to turn every petty lag into a Jonathan Aitken and rehabilitate them into the promised land isn’t just naive – it’s a case of slamming the cell door after the prisoner has bolted.

Prison culture undoubtedly has a radicalising influence on the most impressionable inmates – be that through religious fundamentalism, gang initiation or classic ‘tricks of the trade’ schooling in how to commit a particular form of crime (and invariably get caught). But it’s greed, stupidity, impulsiveness and more often than not poverty that puts a man or woman behind bars in the first place.

To say that poverty breeds crime is to elicit a ‘no shit Sherlock’ response from anyone with a modicum of respect for the relationship between social deprivation and criminality. According to London Mayor Sadiq Khan, figures show that “three-quarters of the capital’s boroughs with the highest levels of violent offending are also in the top 10 most deprived, while the same boroughs also have higher proportions of children under 20 living in poverty than the London average.”

With the number of British children in poverty set to reach a staggering 5.2 million by 2022, the Tory government’s failure to get to grips with an epidemic of escalating unemployment, school exclusions, family breakdowns, chronic drug and alcohol abuse, myriad social services and a mental health timebomb – all of which make the UK the basket case of Europe – will inevitably lead to an increase in crime. Sure, thanks to the pandemic’s restrictions on movement there has been a dip in crime of late (apart from domestic violence, which is on the rise), but this is merely the calm before the criminal justice storm.

And for poor black kids, that storm will invariably become a tsunami. Figures just published by the UK government reveal that 51 percent of all young people in custody are from a so-called ‘BAME’ background, despite ethnic minorities making up just 14 percent of Britain’s population. For the overall prison population, BAMEs represent 25 percent of inmates.

This latest annual report on youth justice statistics doesn’t just highlight yet another example of the British state’s contempt for black people and ethnic minorities. It also reveals the pernicious way in which elites within the criminal justice system use racial profiling among the poor to jail young black people in ever increasing numbers, while happily letting their minions on the frontline of policing and the prison service take the heat from Guardianistas and radicals for being ‘racist pigs’ for seemingly overzealous stop-and-search policies or being ‘fascist prison guards,’ when they are, in fact, just doing their jobs.

This isn’t to say that the stench of bad apples within Britain’s yeomanry isn’t to be rooted out on the mean streets, prison wings and psychiatric wards, where they march to the beat of the ‘top brass’ drum. Feeling the boot heel from on high, a significant minority of grunts with badges or uniforms have always let a little bit of power go to their heads, using black people as a trope for their psychosexual inadequacies.

But just as the Windrush scandal laid bare the myth of the ‘motherland’ via the Home Office’s ill-treatment of former colonial – sorry, ‘British’ – subjects from the Caribbean, and the Tories’ laissez faire attitude towards disproportionate Covid infection rates among BAME communities demonstrates its indifference to the health and wellbeing of millions of BAME Britons, it’s the suits in the Crown Prosecution Service, the judiciary, the legal profession at large, and the probation, parole, social and psychiatric services who really hold a young black suspect’s fate in their hands.

As the political theorist Hannah Arendt might have said today, the wanton jailing of black youths is yet another example of the British establishment’s industrialised and systemic, “fearsome, word-and-thought-defying banality of evil.”

Since the Tories came to power in 2010, the proportion of young people in custody from a BAME background has nearly doubled (up from 28 percent) and is up from 49 percent in 2019. Black and ethnic youths remain the pariah group du jour.

The problem has got to a point that Shadow Justice Secretary David Lammy has called the industrial scale incarceration of BAME youth “a national scandal.” In 2017, under David Cameron’s watch, the MP for Tottenham published the Lammy Review – “an independent review into the treatment of, and outcomes for Black, Asian and Minority Ethnic individuals in the criminal justice system.” Nearly four years on from this damning report, barely any of Lammy’s 35 recommendations have been implemented by the government.

The number of black children cautioned or sentenced has doubled since the year ending March 2010, from six percent to 12 percent. Over a third (36 percent) of all remands involved BAME children. This increases to 49 percent for remands to youth detention accommodation, black children accounting for 29 percent of remands. The government’s figures also reveal that the proportion of all cases in which black children were sentenced for indictable offences has risen from 14 percent to 22 percent in the past five years.

And the stats go on.

Having read the Lammy Review in its entirety, and crunched the government’s latest figures for youth crime, it’s clear that establishment bias – subconscious or otherwise – permeates the criminal justice system, particularly around the fetishisation of young black males.

And we’ve heard it all before, from the Metropolitan Police’s invention of the ‘Gangs Matrix’ in 2012 – a database of suspected gang members operating in London – to Operation Trident and its focus on ‘black-on-black’ crime, to the MSM’s popularisation of the term ‘county lines,’ the latest in a long line of racialised tabloid ‘folk devil’ descriptors that includes ‘Yardies,’ ‘muggers’ ‘steamers’ (remember them?), ‘gangbangers,’ ‘thugs,’ and ‘hood rats.’

This demonisation of black people, and young males in particular, fuels a stereotype that feeds the overwhelming majority of magistrates, judges, prosecutors and defence barrister’s prejudices – subconscious of otherwise – and thus informs courtroom strategy. Yet somehow, we’re meant to believe that the legal profession is beyond subjectivity.

While researching an Old Bailey murder trial a while back for a new book on black masculinity, a left-leaning, white barrister I know who was representing a young black client told me, off the record: “Do I hate the way the system is loaded against black people? Yes, I do. Do I despair at the number of young black men in court? Of course I do. But do I and others profit from it, financially? Undoubtedly. It’s hard to change a system that pays you so well for maintaining the status quo.”

Following the death of George Floyd and the tumult of demonstrations that followed, elites all over the diaspora have been falling over themselves to showboat their ‘progressive’ skills, reminding us of how ‘enlightened’ they’ve become on their quest to ‘heal the wounds’ of ‘racial division.’

But while the broadcast media, book publishing, the church politicians, academics and even notionally gazillionaire footballers can’t wait to take the knee these days for a photo op, the criminal justice system is yet to get ‘woke.’ Until it does, the British establishment remains guilty of clearly believing that black lives don’t matter.