As migrants pour over US border, White House won’t admit Biden’s dealing with a crisis 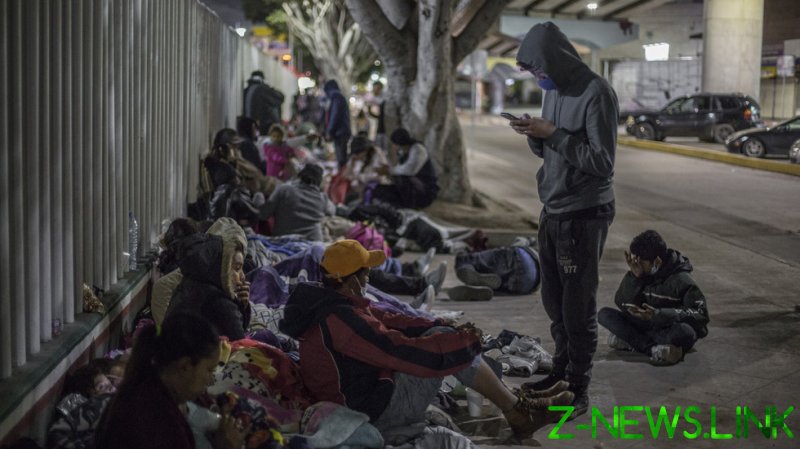 The number of unaccompanied migrant children detained along the southern US border has tripled in the last two weeks to more than 3,250, the New York Times reported on Tuesday. These children are filling the same Customs and Border Patrol facilities that Biden himself called “inhumane” during his 2020 campaign, and the “overflow shelters” opened by the Biden administration are nearing capacity.

On top of the surge in child arrivals, Border agents encountered 78,000 migrants attempting to cross the border in January, the highest number for that month in more than a decade. John Modlin, the interim chief in charge of the Border Patrol’s Tucson, Arizona, sector, told Sinclair reporter Sharyl Attkisson on Sunday that if illegal crossing attempts continue at the rate they’ve been going the last four months, the final tally by the end of this fiscal year will surpass 2018, 2019, and 2020 combined.

Trump’s ‘Remain in Mexico’ policy was eliminated by executive order, and migrants awaiting their asylum claims in Mexico have now begun heading north to the US. Biden has also modified Trump’s policy of turning back all border crossers during the Covid-19 pandemic, carving out an exception for under-18s, hence the surge in unaccompanied minors highlighted by the New York Times.

Among his flurry of executive orders overturning Trump’s border policies, Biden resurrected the so-called ‘Catch and Release’ program, an Obama-era policy suspended by Trump, under which migrants apprehended at the border would be released in the US, on the condition that they later show up to an immigration court hearing. Unsurprisingly, few ever do, and even those who play by the rules face a wait time of up to 689 days.

Critics claim that ‘Catch and Release’ effectively invites migrants to make the journey to the US, and Biden has faced criticism even from within his own party for reinstating the policy. “I don’t think, quite frankly, the Biden administration was aware of what’s happening on the ground here,” Texas State Senator Juan Hinojosa told The Hill on Sunday. “The Border Patrol is overwhelmed, they’re throwing their hands up because they don’t know what to do.”

Don’t call it a crisis!

The GOP has used the burgeoning crisis at the border to attack Biden. House Republicans have accused the Biden administration of “ignoring” the situation, while Trump issued a scathing statement on Friday, blaming the surge in migrant activity on “the disastrous leadership of Joe Biden.”

“A mass incursion into the country by people who should not be here is happening on an hourly basis, getting worse by the minute,” Trump wrote.

Biden has not spoken much about the situation. Asked last week whether there was a “crisis” developing, the president replied “No. We will be able to handle it, God willing.”

Biden’s interactions with the press of late have been limited to curt soundbites after events. In his stead, Press Secretary Jen Psaki has fielded the media’s enquiries, but has struck a similar tone. Asked on Tuesday whether the situation amounted to a “crisis,” Psaki said that she doesn’t “think we need to put new labels on what we have already conveyed is challenging.” Last week, she refused to use the term “crisis,” using “challenge” instead.

Homeland Security Secretary Alejandro Mayorkas also used the word “challenge” during a press conference, reassuring reporters that the Biden administration has “our resources dedicated to managing it.”