As Israel plans to evict up to 550 Palestinians from East Jerusalem, Biden admin remains silent 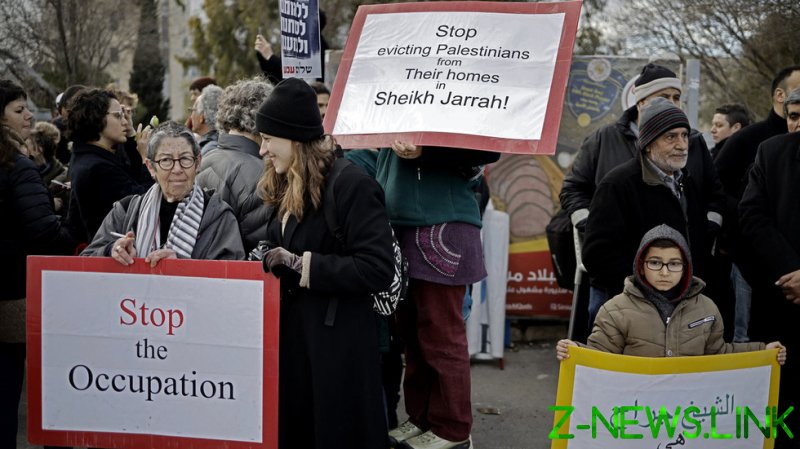 In what could become one of the largest expulsions of Palestinians from East Jerusalem, Israeli settler organisations are working with the country’s legal system to evict 24 families from their homes.

During October, 2020, the Israeli magistrate court of Jerusalem ordered the expulsion of 12 families, out of the 24 living inside the East Jerusalem neighbourhood of Sheikh Jarrah. In addition to their expulsion from their homes, the Palestinian families were also ordered by the court to pay $20,000 in legal fees.

The expulsion order, which is likely to be completed with the destruction of Palestinian property, after it is seized to make way for illegal Israeli settlers, is set to be enforced as early as May. As it stands, four Palestinian households – comprising 27 people – will be forced out onto the street no later than May 2, while three other families are set to be forced out in August.

Israeli settler organisations based in the Karm al-Jaouni area are behind the expulsion orders, claiming that the land on which Palestinians live, in Sheikh Jarrah, was once owned by Jews prior to the 1948 Arab-Israeli war. Despite Palestinian attempts to present their legal case that the settler organisations are lying about this and have no proof, Israeli courts refuse to see the evidence. It is also important to note that, while the Israeli legal system will recognise the claims of Jewish Israelis to land allegedly owned previously by Jews, this right is not granted to Palestinians.

On the issue of the Sheikh Jarrah evictions, Fadi al-Hidmi, Palestinian Authority Minister of Jerusalem Affairs, stated that the international community is obligated to step in. “What is taking place is a systematic, programmed process of replacing the Palestinians expelled from their land and property with foreign settlers,” he said.

Last night, Palestinian Islamic Jihad (PIJ) movement also released a statement, vowing a response to the actions of Israel in Sheikh Jarrah. The PIJ proclaimed that Israel “will pay the price for this aggression.”

In the 1970s, following the June 1967 occupation of East Jerusalem, Israel began implementing a “demographic balance” policy. The aim for the Israeli authorities is to limit the percentage of Palestinians living in the city to 30% or less. While Israel claims that Jerusalem is its undivided capital, the Palestinian Authority only seeks to gain back East Jerusalem, which is considered under international law to be an illegally occupied territory.

Despite the Biden Administration having stated consistently that it seeks a two-State solution and that this is the only solution in the Palestine-Israel conflict, it continues to ignore the ongoing ethnic cleansing of East Jerusalem. Not only does Biden not confront Israel on the issue of its illegal settlements and home demolitions in Jerusalem, but it has worked to attack the International Criminal Court (ICC) which is poised to investigate the settlement issue.

Biden’s Secretary of State Antony Blinken, who is a supporter of the notion of a two-State solution weighed in on the announcement from the ICC that it would investigate alleged Israeli War Crimes, stating “The United States firmly opposes an @IntlCrimCourt investigation into the Palestinian Situation. We will continue to uphold our strong commitment to Israel and its security, including by opposing actions that seek to target Israel unfairly.”

If there is to be a two-State solution, the capital of the future Palestinian State will have to belong in currently occupied East Jerusalem. However, this is being made more and more impossible by the day, with the systematic expulsion of Palestinian residents from the city, along with the expansion of key settlements such as Atarot, Ramat Shlomo and Givat Hamatos, which divide the city from the West Bank.

Along with Sheikh Jarrah, Israeli Settler organisations are also heavily targeting the area of Silwan, from which at least 36 families have been expelled since the beginning of 2020, according to Israeli NGO Peace Now. In East Jerusalem as many as 200,000 Israeli settlers live, with about 2,500 hardline settlers residing in properties surrounding Palestinians in areas like Silwan.

Earlier this week, 11 Palestinians were injured in clashes with Israeli police forces, who reportedly raided the East Jerusalem neighbourhood of Kafr Aqab as a bulldozer made an opening in the wall surrounding the area. Local youths then acted to tear down the fences built around the construction site, for what has been described as a Judaization project in the area.

An Israeli NGO called Grassroots Jerusalem states that the presence of illegal Israeli settlers in East Jerusalem causes great agitation to Palestinian residents. The NGO claims that settlers have “been responsible for forced evictions and terrorism.”

Last year almost 1,000 Palestinians were made homeless due to Israeli house demolitions in the West Bank and East Jerusalem, with over 10,000 settler units having been approved.

If the Biden Administration continues to remain silent and shield Israel from prosecution for its violations of International Law in East Jerusalem, the two-State solution that the US claims to seek will only become more difficult to achieve. In order for there to be a Palestinian capital in East Jerusalem, Israel’s illegal settlements have to halt further construction, evacuate all settlers and the annexation of the territory – since 1980 – has to be reversed. None of the steps necessary to facilitate a two-State solution includes shielding war crimes, and what we are seeing is exactly that.