Home / Society / As in the Soviet Union rewrote the past

As in the Soviet Union rewrote the past 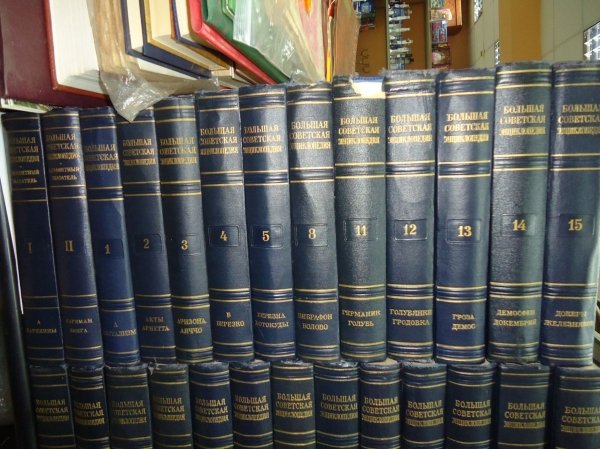 So, friends — today will be a post about how in the Soviet Union rewrote the past. I think you all have read the famous writers George Orwell — his immortal novel “1984” and the equally famous novel “Animal farm” (in another translation — “Farm animals”), if not — be sure to read, there is a very accurate description of models of all modern dictatorships.

In the novel “1984” Orwell very accurately described as dictators trying to “change the past” to influence the minds of people. For example, if Oceania was at war with Eastasia, it was alleged that Oceania always been at war with Eastasia, and all mention of the fact that there was no war — were destroyed. Or more household example if a kilo of oil began to cost 5 dollars instead of 4, then the Newspapers wrote so oil fell from $ 6 to 5, and all mention of the fact that recently the oil was worth $ 4 — erased by the destruction and rewriting of all the old printed sources of information.

The interesting thing is that in the Soviet Union often “dealt with the past” in this way, what was described by Orwell. In today’s post — the story of one such example, which I personally found even in childhood. Make sure you check out the article below, it is interesting. Well, friends to add do not forget)

The second edition of the encyclopedia consisted of 50 volumes with blue roots (49 volumes with articles alphabetically and 50th themed under the title “Soviet Union“), which took exactly 4 shelves in the glassed-in bookcase. I think you noticed that the second edition of the encyclopedia began to emerge under Stalin, and finished to be published under Khrushchev — here-here lies roelofsen.

One day I was flipping through one of the volumes of the encyclopedia, published after 1953, and came across an interesting memo that was invested at the beginning of the book. Here is what she read:

The SUBSCRIBER
A SOVIET ECYCLOPEDIA

GOSUDARSTVENNOE scientific publishing house “Great Soviet encyclopedia” recommends be removed from TSB 5 volumes 21, 22, 23 and 24 pages and portraits, affixed between 22 and 23 pages, in return for which you will get the page with the new text.

With scissors or a razor blade to cut sleduet the following pages, keeping the near to the spine of the field to which to glue the new page. 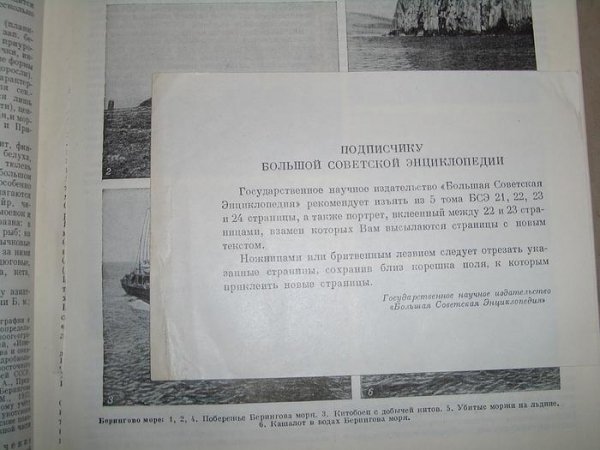 Of course, I immediately went to check what was in the same volume (volume number 5, Berezina — Batacuda) the notorious 21, 22, 23 and 24th pages that were supposed to be cut, thrown away and forget about them.

There was nothing like the article about Beria, of course, full of laudatory epithets. As you can see from the article, “under the leadership of Beria party organizations of Transcaucasia and Georgia did a great job on organizationa to strengthen their ranks, Idina-Bolshevik education of party members in the spirit of boundless devotion to the Central Committee of the CPSU(b), and the great leader and teacher I. V. Stalin” (exact quote).

By the way, not much and lied to members of the party was really loyal to, not people, and the nomenclature and personally “chief scientist”for which wrote denunciations committed murder here in the article this has already been said. 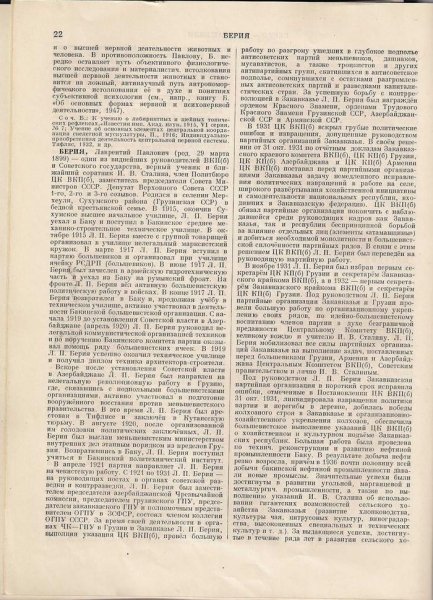 Then, of course, it turned out that Beria was a criminal, and all memory of it were ordered destroyed. In General, all exactly like one immortal text, which describes how each new Soviet General Secretary, all previous along with all of the Politburo turned out to be scoundrels, and scoundrels: 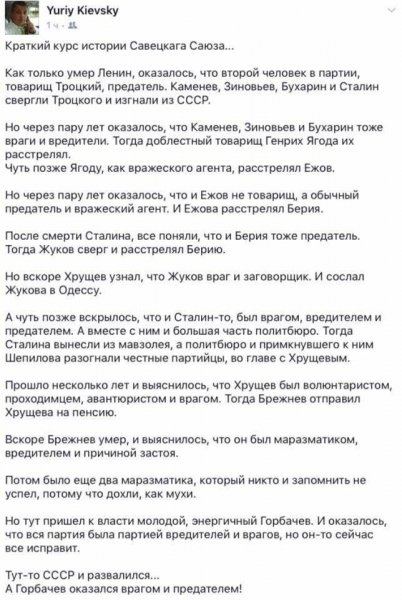 PS by the Way, personally I do not rule out that many respectable Soviet citizens, locked the door and zadernuv curtains, do trembling hands cut and threw the pages wkleic them. The party was ordered to forget — I forgot.

And by the way, maybe you know some examples of “rewriting the past” in the Soviet Union?