Home / WORLD / ‘As if it was Baghdad’: US Secret Service creates fortified ‘Capitol Green Zone’ ahead of inauguration 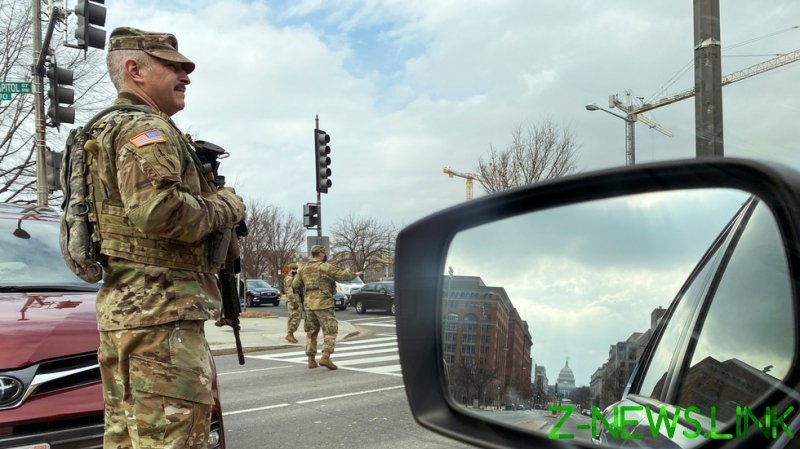 Amid fears that Joe Biden’s swearing-in ceremony on January 20 could spark unrest, authorities have decided to drastically expand a security perimeter established around the Capitol, which was stormed by demonstrators earlier this month.

The new ‘red’ and ‘green’ zones laid out by the Secret Service encompass areas near the White House, Lincoln Memorial, National Mall, and the Capitol. Even some nearby residential and commercial areas have been included in the guarded security perimeter. The Secret Service defined the ‘Green Zone’ as streets that are only accessible to residents and businesses. Individuals who want to travel through the Green Zone will have to show identification. The more extreme ‘Red Zone’, on the other hand, is closed to all traffic, with the exception of authorized vehicles.

More than 20,000 armed National Guard troops will be stationed around the area, which is being protected by concrete barriers, metal fencing with razor wiring, and patrolling Humvees.

The restricted zones were announced on Friday and are expected to remain in place through January 21. However, DC Mayor Muriel Bowser warned residents that the heightened security measures would likely be the “new normal” following Inauguration Day, and said she couldn’t provide a timeframe on when the fences around the Capitol would come down.

The unprecedented ‘zones’ in the heart of the nation’s capital created considerable hand-wringing on social media, with many people comparing DC’s Green Zone to its infamous equivalent in Baghdad. Established after the US invasion of Iraq, Baghdad’s Green Zone is a heavily-fortified compound that houses government buildings.

CNN host Wolf Blitzer said the “sad” situation in Washington reminded him of the “war zones” that he saw in “Baghdad or Mosul or Falluja.”

There was similar consternation from NPR’s Steve Mullis, who described the security perimeter in the capital as “dystopian,” but also reflective of the current political and social climate in the country.

Responses weren’t all doom and gloom, however. Social media users could not resist the temptation to crack jokes about the startling developments. One pundit announced in jest that city officials had erected Baghdad-inspired monuments in order to give DC a more “Green Zone” feel.

Numerous others observed that Donald Trump had finally gotten the “wall” that he so desperately wanted, adding that the outgoing US president should be forced to pay for the barriers.

Less excitable observers dismissed the whole affair as unnecessary “security theater,” arguing that the alleged threat of violence in the capital has been greatly exaggerated.

The capital has been on heightened alert after a pro-Trump rally on January 6 led to a group of protesters breaking into the Capitol. The chaos, which has been characterized as an “insurrection,” has been linked to several deaths. Trump has been blamed for inciting the violence, prompting the House of Representatives to pass articles of impeachment against the president earlier this week. Trump has denied any wrongdoing and insists he has always urged his supporters to remain peaceful. The incident has triggered calls for a crackdown on “domestic terrorism,” with the incoming Biden administration vowing to make domestic security policy a priority.