‘As fake as her tweets’? Police open conspiracy PROBE into Greta Thunberg’s ‘protest toolkit,’ accuse creators of ‘WAR ON INDIA’ 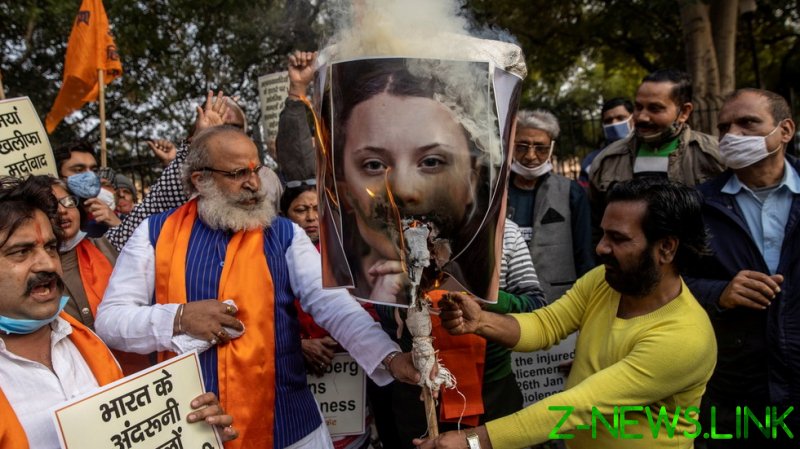 Thunberg took to Twitter on Wednesday to share a lengthy document outlining ways for activists to contribute to India’s ongoing pro-farmer protests, including stock messages and hashtags to disseminate on social media, as well as advice on organizing rallies. Within hours, the “toolkit” was taken offline by its creators and replaced with a much shorter version, with Thunberg noting the previous doc was “outdated” as she shared the new guide.

Thunberg had already come under fire in India for lending her support to the controversial protests, which erupted into violence in New Delhi late last month, with Indian authorities investigating Sikh separatist movements for one particularly rough day of unrest in which nearly 400 police officers were injured and at least one protester was killed.

Police in the Indian capital have linked the creators of Thunberg’s toolkit with the violence in January, and launched a criminal investigation, police sources told The Indian Express on Thursday.

“Delhi Police has taken cognizance of a ‘Toolkit Document’ found on a social media platform that predates and indicates a copycat execution of a conspiracy behind the 26 January violence. The call was to wage economic, social, cultural and regional war against India,” the police told the paper.

Thunberg’s place in the investigation is unknown. However, police Commissioner Praveer Ranjan told NDTV that the toolkit itself “exposes the conspiracy by an organized overseas network” to instigate the farmer protests. For Thunberg, whatever capital she may have had among some more nationalistic Indians seemed well and truly flushed away after Wednesday’s snafu.

One commenter called the social media campaign “inherently deceitful and deeply diabolical,” while another pondered whether Thunberg’s “Climate Change activism is also as fake as her tweets?”

Whether Thunberg has been named in the investigation or not, her global recognition has made her a lightning rod for the backlash against the apparently “grassroots” campaign in support of the farmers. However, she’s not the only child activist backing the protests. Before Thunberg’s tweet, 10-year-old Licypriya Kangujam was tweeting her support, posting the same pictures recommended by the organization behind Thunberg’s toolkit. Like Thunberg, Kangujam rose to fame speaking out against climate change, and was paraded around conferences and seminars in the west. Unlike Thunberg, Kangujam didn’t reveal the gameplan behind her tweets.

The group behind Thunberg’s toolkit, the ‘Poetic Justice Foundation,’ is a Canadian-based Sikh organization that describes itself as “most actively involved in the #FarmersProtest.” The group, whose logo appeared in the documents shared by Thunberg, helped organize the protest in January, and the PJF has been accused in India of links with Khalistani separatists.

Aside from the police investigation, India’s government has condemned Thunberg and her ilk for lending support to the protesters. “It is unfortunate to see vested interest groups trying to enforce their agenda on these protests, and derail them,” the country’s Ministry of External Affairs said in a statement on Wednesday, accusing those groups of trying “to mobilize international support against India” with “sensationalist social media hashtags and comments.”

The protests were triggered by a controversial agriculture reform bill, which some farmers claim would open up the country for foreign exploitation and deprive them of a minimum wage. India’s government, however, has maintained that the reform would actually increase their production by opening up the market to private investment, while giving producers more options regarding buyers for their goods.