Home / WORLD / As evidence emerges of provocateurs inciting the Jan 6 Capitol riot, was an asset working on behalf of the FBI to stir up trouble? 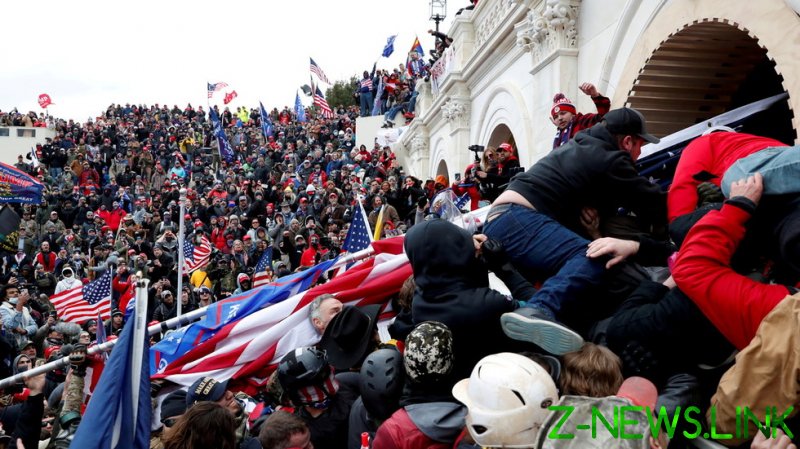 Ever since January 6, speculation has abounded that the US authorities either knew what was going to transpire in advance and allowed it to happen, or undercover state infiltrators played some role or other in orchestrating the upheaval.

While acknowledging that FBI informants were on the ground that day, and, indeed, the Proud Boys and Oath Keepers – two far-right groups that played prominent roles in the Capitol break-in and preceding protests – both have intimate ties to the Bureau at the highest levels, the latter theory has been universally dismissed as conspiratorial nonsense.

Yet, given the agency’s history, the notion isn’t so far-fetched. After all, for decades during the Cold War, the FBI operated a dedicated counter-intelligence program, known as COINTELPRO, that sought to infiltrate, undermine and discredit activist groups and protest movements from within. A key tactic engaged in by undercover provocateurs was marshalling others to engage in violence.

More recently, in October 2020, the bureau foiled a deranged plot hatched by the Wolverine Watchmen militia group to kidnap Michigan Governor Gretchen Whitmer. It’s been revealed that 12 of the individuals involved in the doomed conspiracy were FBI informants.

Now, pro-Trump website Revolver has offered the most compelling evidence yet that undercover provocateurs of some distinction were pivotal to the events of January 6.

The website records how, by January 8, the FBI had assembled mugshots of its first 20 ‘most wanted’ Capitol rioters, offering cash rewards for successful identifications and fruitful leads. It took just three days for resourceful Antifa activists to pinpoint ‘Suspect 16’ as Arizona resident Ray Epps, a former high-ranking US Marine. Swathes of evidence supported the identification, including, somewhat amazingly, a direct admission by the man himself to his local newspaper, the Arizona Central.

Published January 11, the report discussed how Epps had been approached by the outlet and asked for comment about a widely circulated video from the night of January 5, in which someone closely resembling him boldly proclaimed to a crowd of fellow Trump supporters, “We need to go into the Capitol.” He confirmed he was that individual, but played down the significance of his comments, alleging that the “only thing” he meant was “we would go in the doors like everyone else.”

He went on to assert that the violent manner in which protesters subsequently entered was “totally, totally wrong,” but did not clarify why, in the same clip, he also declared, “I’ll be arrested” for proposing they gain entry to the building in the first place.

In the following weeks, news reports of arrests of individuals who’d busted into the Capitol were published almost daily, although Epps’ name never came up. Indeed, the FBI seems to have taken no decisive action in his regard until almost six months later, and, even then, not in a manner most would have expected. At an indeterminate point on July 1, between the wee hours of the morning and early evening, his mugshot was abruptly removed from the bureau’s most-wanted list, leaving an unaccounted-for gap between Suspects 15 and 17.

There is no indication that this was because he had been arrested. In every other case of a successful arrest, the corresponding photo of the suspect in question is slapped with an “arrested” logo, and his or her name no longer appears in the dedicated, searchable Justice Department Capitol Breach Cases database. Quite why Epps apparently remains at liberty is perplexing, although how he came so quickly to the FBI’s attention is no mystery.

The video referenced by the Arizona paper is one of many depicting Epps aggressively advocating the breach of the Capitol from January 5 onwards. That evening saw a law enforcement-mediated standoff between Trump supporters visiting Washington DC for the next day’s planned and widely promoted protest, and Antifa and Black Lives Matter activists.

Strikingly, an aspect of that particular clip not mentioned in the news report is the extremely hostile reaction his bold suggestion elicited from those around him. After he repeatedly advocated “going in”, other pro-Trump protesters respond with a shouted chorus of “no!”, before chanting in unison “Fed!” over and over, prompting Epps to awkwardly clarify that he meant “peacefully”.

Multiple separate clips show Epps moving between different groups in the crowd, and repeating the same routine, loudly calling for attendees to enter the Capitol building, and typically being met with indifference or even outright antipathy. In one, his audience’s exhaustion with his antics is evident – he asks for “one minute” to make his pitch yet again to another group of Trump supporters, but the throng responds that he has only “30 seconds”, despite a sympathetic protester drawing attention to Epps’ military background and calling for him to be respected.

This activity alone would surely mark him out as of interest to the FBI – after all, determining the degree to which what transpired on January 6 was planned in advance and, if so, by whom, were central initial questions in its probe that remain unanswered. However, Epps’ movements the next day, much of which was likewise captured on film, would make him one of the most valuable sources of information on the Capitol’s infiltration.

Revolver meticulously reviews numerous videos showing Epps apparently issuing orders to a masked Capitol rioter, seemingly also a former US Marine, who appears to have been armed with super-strength bear mace, to have engaged in a range of incendiary acts, and to have repeatedly provoked other protesters to commit violent acts and not back down from law enforcement. That rioter, Suspect 273 – also known as #MaroonPB – coincidentally remains at large today, too.

Even more tantalisingly, though, one clip shows Epps right on the frontline when the protest turned violent and the police barricades were broken through for the first time. Ryan Samsel, who has been blamed for kickstarting the “insurrection”, is pictured standing in front of the barricade, in a bitter showdown with the officer behind.

Epps emerges from the left of the frame, takes Samsel aside, whispers something in his ear, then vanishes. Moments later, Samsel and others begin charging at the barricades, knocking them down – a pivotal act that allowed for the eventual deluge of protesters into the Capitol. Media reports in the immediate aftermath of January 6 suggested the infiltrators’ path was effectively laid by the DC Police’s failure to deploy precautions such as ‘frozen zones’ (areas officially off-limits) and the hardened barriers commonly used for major events.

Samsel was arrested just three weeks after January 6 – conspicuously, he’s one of only a few individuals accused of comprising the large “breach team” who’s been taken into custody. According to his attorney, in prison, he’s been subjected to vicious torture, his jaw, nose and orbital bone having all been shattered, and his right eye damaged so badly he may be permanent half-blind.

Almost a year later, we’re still no closer to learning the truth about January 6. In the meantime, that date has been endlessly invoked by lawmakers, pundits and journalists as a grave attack on US values and democracy. Some have compared the event to 9/11, while the White House has likened it to the Civil War and proposed wide-ranging new domestic spying powers to avert another such catastrophe.

Consideration of how state capitol buildings have been repeatedly invaded during protests in the past, and DC’s Capitol Hill was overwhelmed at the conclusion of the 2017 Women’s March, has been entirely lacking. But that doesn’t fit the narrative many powerful people wish to perpetuate about January 6, so this staggering oversight is unsurprising. That the show trials of the 648 people charged in connection with the riot so far will shed no light on potential deep-state machinations that day is likewise almost inevitable.