Home / WORLD / As Elon Musk speaks of ‘MULTIPLANETARY’ vision, Bernie Sanders tries to drag him back down to earth with scheme to tax the rich

As Elon Musk speaks of ‘MULTIPLANETARY’ vision, Bernie Sanders tries to drag him back down to earth with scheme to tax the rich 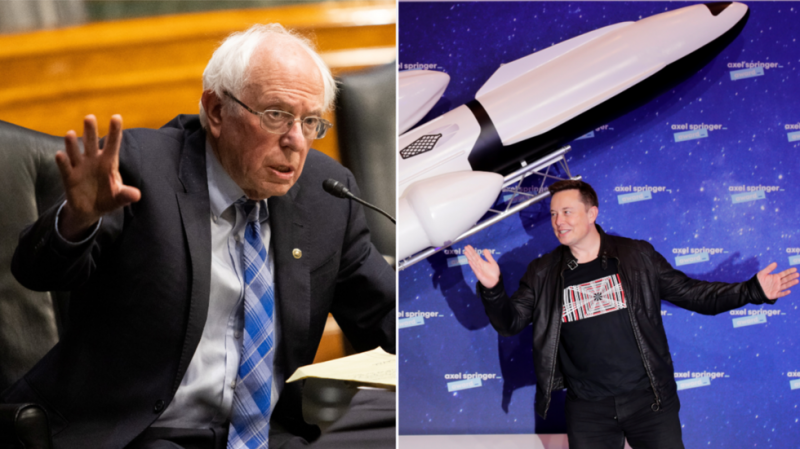 A Twitter row between the self-described ‘democratic socialist’ senator and the ‘self-made billionaire’ began on Thursday, when Sanders complained that Musk and Amazon founder Jeff Bezos own more wealth than the bottom 40 percent of Americans. “That level of greed and inequality is not only immoral,” he said, “it is unsustainable.”

Notwithstanding the fact that Musk and Bezos are tech entrepreneurs who have created billions of dollars in wealth (at least based on their inflated stock-market valuations) and thousands of jobs (many of which are low-paying), Musk focused his response on the purpose of his $162 billion fortune.

“I am accumulating resources to help make life multiplanetary and extend the light of consciousness to the stars,” Musk tweeted on Sunday in reply to an article about Sanders’ attack. The South African immigrant to the US is founder of aerospace company SpaceX, among other companies, and he aims to help colonize Mars.

Investors have been captivated by Musk’s vision for space and electric vehicles to the extent that he’s now ranked by Forbes as the second-richest person on the planet, behind only Bezos. His fortune is tied up primarily in Tesla and SpaceX shares.

But Sanders seemed unimpressed and entirely focused on how the pie is divided – not the size of the pie. “Space travel is an exciting idea, but right now we need to focus on Earth and create a progressive tax system so that children don’t go hungry, people are not homeless, and all Americans have health care,” is said in response to Musk. “The level of inequality in America is obscene and a threat to our democracy.”

The US has had a progressive tax system since 1862, and many Twitter commenters argued that Sanders can’t solve America’s problems by taxing the rich. Taking the entire fortunes of both Musk and Bezos would fund about three weeks of federal government spending or pay off 1.2 percent of the national debt.

“No big problem is ever solved from inside the box,” author and self-described “space wonk” Greg Autry said. “Making the resource pie bigger is the only way to improve the lives of everyone, reduce conflict and save our climate.”

Writer and universal basic income advocate Scott Santens said Sanders is creating a “false dichotomy” in suggesting that America has to choose between exploring space and fighting poverty. “Please don’t play into zero-sum scarcity thinking,” he said. “We can and should do both. The government doesn’t need Musk’s wealth. We can just end poverty. It’s a matter of will not resource limits.”