Home / policy / As Donetsk fighters staged a “Maidan” in Abkhazia 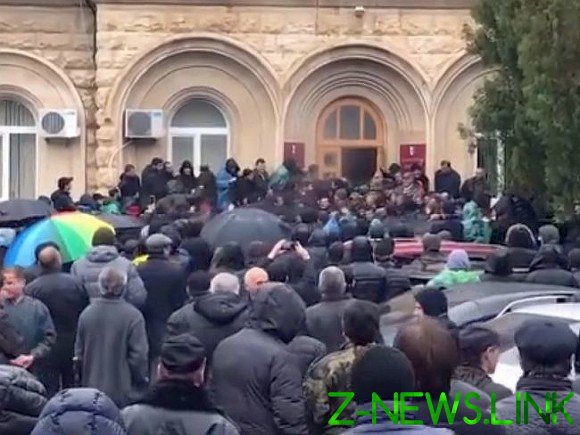 Clan coup attempt in Sukhum will not affect the billions in subsidies from the Republic budget.

Little and almost no one recognized Republic of Abkhazia, with a population of slightly more than 200 thousand people, a few days was rocked by political upheavals. However, the Kremlin even after the storming of Sukhumi in the building of the presidential administration publicly almost did not react. And only the prospect of full-scale civil war forced Moscow to intervene. In Sukhum, Abkhazia (Georgians call it Sukhumi) on the tenth of January immediately flew Deputy Secretary of the Russian security Council Rashid Nurgaliyev. And by a strange coincidence, this evening, the cassation Collegium of the Supreme court of Abkhazia has invalidated the recent elections of the President of the Republic, according to which the defeated Raul Khajimba. That is, the abscess is Mature from September of last year, and “burst” just now.

Let me remind you the most important of the recent events. A surge of dissatisfaction with the results of the election of the President (Raul Khajimba scored 47.39 per cent of the votes and the opponent from the opposition alas Kvitsinia — 46,17%) commenced on 9 January. A group of protesters from 500 people (according to the local media) came first in the Supreme court of Abkhazia (here was considered the cassation of Quizine), and then moved to the presidential administration building and took it by storm. On the network posted a video of protesters got inside by smashing a first floor window and smashed it all that came under the hot hand, scattering the papers.

The speaker of Parliament Valery kvarchia the released protesters with appeals for prudence suffered a heart attack, he was taken away by ambulance. The group of deputies gave the President a requirement dissent: “Given that socio-political situation in the country deteriorated to a critical and threatens not only the safety of our citizens, but the existence of the statehood of the Republic of Abkhazia, political party “Aytayra” (“Revival” — A. Y.) appeals to Khajimba rauli to Jankovic with a call to resign. Only this will allow us to avoid the worst-case scenario in the country.” However, the President did not share the concerns of opponents, refusing to surrender power.

A second attempt to “enlighten” Khajimba has already made the country’s Parliament. The night of the ninth of January at an extraordinary session the deputies adopted the appeal to the President with a call to leave — for the sake of stabilizing the situation. Voted 19 out of the 27 deputies present in the room. In response the President threatened to impose a state of emergency if protesters did not calm down. The government called the events a coup attempt. The Minister of internal Affairs of Abkhazia ordered to take under round the clock security for government buildings and to prevent collisions. In the middle of the day on the tenth of January, the President and the opposition have begun negotiations with the mediation of members of the Public chamber of the Republic.

See also:  In the Donetsk region detained the Belarusian who fought in the ranks of the separatists

Well, then you know — arrived “the wizard in the blue helicopter” from Moscow, and the Supreme court of Abkhazia has cancelled the results of the previous presidential elections, appointed in March this year new. Although the court decision said that it takes effect immediately, through Khajimba Vice-President Aslan Barziza has declared that will appeal against it. Moscow, however, his ardor was immediately tempered: on the eve of Sukhum arrived to “strengthen” the assistant of Vladimir Putin, Vladislav Surkov, and Raul Khajimba resigned.

What this means for Russia a protectorate which, in fact, the lives of Abkhazia? Yes, in General, nothing. The organizers of the rally developed into a riot, became the opposition parties, including “amtsakhara” (“Tribal fires”) and the “United Abkhazia”. However, these dissenters, opposing Khajimba and his team, are the same Pro-Russian political forces as the current government. That is, the protests in the Republic nothing to do with its status as the self-proclaimed independent country, controlled by Russia. The Russian foreign Ministry, these events are called internal affair of Abkhazia. Translated from the diplomatic — quarrels of local politicians and clans.

Interestingly, the Abkhaz police was rampant, as could be seen in the famous Moscow rallies. During the protests, according to some media reports, seven people were injured. And of course the leadership of Abkhazia is not hyping the situation through local television channels, not to mention Federal to store these events in the Caucasus, almost chaste silence.

However, without the sensation did not come. As it turned out, along with opposition parties have organized and coordinated the Abkhaz “independence” of the local residents who fought in the non-recognition of the Donetsk people’s Republic. (As reported by “Interfax” with reference to the administration of the President of Abkhazia, the coup attempt was attended by the Ukrainians, who called themselves citizens of the DNI.) In particular, one of the initiators of the protest was Akhra Avidzba, known as the “Abkhaz”, who fought in the Donbass against Ukraine. He was the commander of the brigade “Tag”. Avidzba in the video through the Network called on citizens to support the protest against the “usurpation of power” in the Republic. Approving comments beneath it depict the crime and corruption situation in the country. Apparently, one of the reasons activity of the former field commander is a personal tragedy in November last year, in Sukhumi, was shot by his cousin alas Avidzba.

Another probable instigator of the “revolution”, the media called Inal Ardzinba (nephew of the first President of Abkhazia Vladislav Ardzinba), which Ukraine law enforcement searching for alleged infringement of its integrity and help the DNI and the LC. From 2014 to 2018 Ardzinba worked in the presidential administration, focusing, in particular, issues of cooperation with Ukraine and the breakaway republics. Was in charge of “the Committee of public support residents of the South-East of Ukraine.” SBU accuses him and that he tried to organize in Odessa the “Bessarabian Republic.” In 2018 Inal Ardzinba, left the administration, going to work in the ROC.

As reported by Telegram-channel “Nesigur”, “people from the entourage of President Khajimba argued that the “coup” in Sukhum was organized by a former ally of Surkov Inal Ardzinba and former presidential candidate Kvitsinia”. According to the channel, “for his (Ardzinba) back stand the head of Rostec Sergey Chemezov, senior military and security officers. In addition, Ardzinba has the support of the Russian Orthodox Church and foreign Minister Sergei Lavrov”.

It is strange, however, that having such a heavy “artillery”, Ardzinba and his supporters for nearly four months could not legally, without the “revolution” to resolve the post-election conflict. And anyway — why did he do it? As reported before, the Abkhaz elections last September, the media, Inal Ardzinba may lead the government of Abkhazia in case of election of Quizine President. However, as it became known, is now the single candidate from opposition on presidential elections will be Aslan Bzhania, ex-head of the security service of the Republic. Fight of the Abkhazian clans for the budget of the Republic, 70% financed by Russia, and that Moscow has poured at least 40 billion rubles, continues.