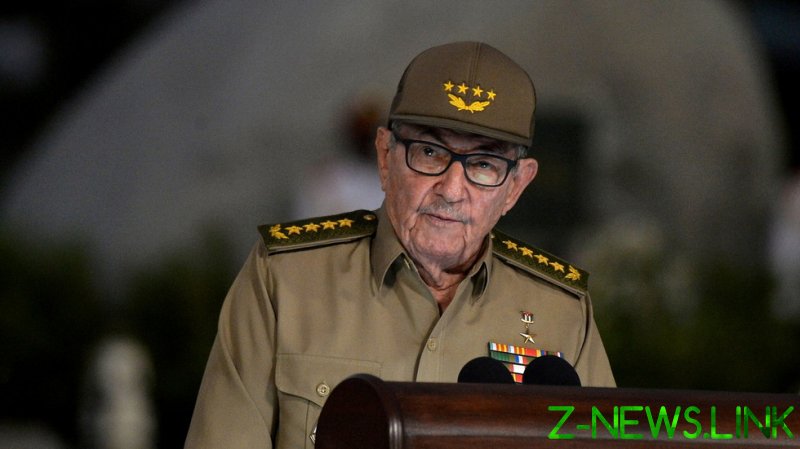 On April 16, Cuban leader Raul Castro announced his intention to resign and pass leadership to a younger generation “full of passion and anti-imperialist spirit.” Having taken over power from his brother Fidel in 2008, his departure marks the seeming end of a dynasty that has ruled Cuba since 1961.

To mark the historic occasion, the National Security Archive released a number of previously classified US Central Intelligence Agency (CIA) documents that expose how Washington had well-developed plans to assassinate Raul.

A general overview of the plot is provided by a January 1975 memorandum, prepared for the CIA Inspector General, with a stated subject of “questionable activities.” It noted that Jose Raul Martinez Nunez – “a Cuban national and ranking Cubana Airline pilot” – was “developed and recruited” by the Agency at some point in 1960.

On July 18 that year, the CIA’s freshly-recruited asset requested an emergency meeting with his handlers, in which he revealed that “he was the likely choice to pilot a chartered Cubana Airline flight from Havana to Prague, to pick up Raul Castro and his official party,” scheduled three days hence.

CIA headquarters and “appropriate field stations along the flight route” were duly advised of the flight schedule, and on the morning of July 21, Langley cabled its Havana station suggesting that the voyage represented a golden opportunity for the “possible removal” of the Cuban revolution’s “top three leaders”, a prospect under “serious consideration.”

Martinez was contacted to determine his willingness to “[arrange] an accident” during the plane’s return trip from the Czech capital, and offered $10,000 – equivalent to $90,000 today – for successfully completing the operation, or “a reasonable amount in excess of that.”

A CIA representative then met with Martinez to discuss the “accident,” the pair discussing the conspiracy’s finer points as he drove to the airport. Martinez wanted assurance that in the event of his death, Washington “would see that his two sons were given a college education,” which he received. However, upon returning to headquarters in Havana, the Agency operative was advised a cable had been received ordering that the plan be called off. It simply stated, “do not pursue…would like to drop matter.”

The declassified files indicate this was for practical rather than humanitarian reasons. A cable sent to Langley from Havana station the next day spells out the limitations of the two “possibilities which can pass as accidental” – “engine burnout on takeoff to delay or harrass [sic] trip; vague possibility [of] water ditching approximately three hours out from Cuba.”

“Martinez ruled out engine failure in flight due [to] imminent danger of fire and lack [of] opportunity to save any passengers or crew. Doubts ability [to] effect puncture of tire since plane will be under guard. Doubts ability [to] perform real accident without endangering lives of all on board but willing [to] attempt harassment if opportunity presents,” the cable states.

As Martinez was in the air by the time the plot had been called off, there was no way the Agency could inform him of its cancellation – although as luck would have it, no such opportunity to arrange the “accident” actually arose at any point during the sojourn, meaning Raul et al travelled to and from the Czech capital without hitch.

As the 1975 memorandum records, the plucky pilot formally defected to the US in December 1960, taking up residence in Miami, Florida. Around 500,000 Cubans fled there in the 15 years following the 1959 revolution, many of them subsequently becoming embroiled in the CIA’s secret war on Fidel Castro’s government.

Perhaps the most notorious episode in this long-running campaign is the April 1961 Bay of Pigs Invasion – Raul Castro announced his resignation on its 60th anniversary.

The effort saw 1,400 Agency-trained and armed exiles attempt to overwhelm and seize control of the island. The daring incursion’s success was entirely contingent on US air support, which then-President John F. Kennedy refused to provide, meaning it foundered in just three days, with at least 114 insurgents killed, 360 wounded, and 1,200 captured and jailed.  In December the next year, the release of 1,113 Bay of Pigs veterans was secured by a CIA-assisted lawyer, in exchange for $53 million – worth $464.5 million today – in food and medicine.

The details of the embarrassing episode are farcical in the extreme, but the newly-released files make abundantly clear the CIA and their exile proxies were deadly serious – quite literally. A June 1966 internal Agency document outlines a labyrinthine plot to assassinate Fidel Castro in the immediate wake of the invasion.

In August 1960, Richard M Bissell, the senior Agency staffer tasked with overseeing the Bay of Pigs operation, contacted the CIA’s Office of Security, seeking assets who could assist with “a sensitive mission requiring gangster-type action.” The plan was so sensitive it was even kept secret from representatives of JMWAVE, a major covert operations and intelligence-gathering station operated by the CIA from an airship off the coast of Florida.

As a result, private investigator Robert Maheu – whose agency inspired the classic TV series Mission Impossible – was contacted and asked “if he could develop an entree into the gangster elements as the first step toward accomplishing the desired goal.” As Maheu later explained, the CIA was his “first steady client,” giving him “cut-out” assignments – “those jobs in which the Agency could not officially be involved.”

Maheu met with mobster Johnny Roselli in September 1960 in New York City, claiming to represent business interests that suffered substantial losses as a result of the Cuban revolution, and offering up to $150,000 for Castro’s “liquidation” – “it was to be made clear to Roselli the US government was not, and should not, become aware of this operation.” Initially reluctant to get involved, the mobster was eventually persuaded to introduce Maheu to his associates Santos Trafficant and Sam Giancana – both members of Attorney General Robert F. Kennedy’s top 10 most wanted list.

Giancana suggested a “potent pill” be placed in Fidel’s food or drink by Juan Orta, “a Cuban official who had been receiving kickback payments from gambling interests” and “still had access to Castro.” The CIA’s Office of Technical Service was then asked to “develop a pill that had the elements of rapid solubility, high lethal content, and little or no traceability.”

Six were tested, with three ultimately provided to Orta for the mission – however, after several weeks of trying, he “got cold feet and asked out of the assignment,” recommending another candidate who likewise “made several attempts without success.”

Presumably getting desperate, the CIA approached prominent exile Anthony Verona, who “jumped at the opportunity of getting involved,” and made clear he was “willing to handle the mission through his own resources.” However, his “potential was never fully exploited,” as the assassination plan was cancelled after the Bay of Pigs cataclysm, and the pills “retrieved” by Langley.

It was far from the only bullet – or pill – Fidel dodged during the 49 years he led Cuba. In all, he may have survived at least 638 Washington-sponsored assassination attempts.

Fabian Escalante, retired chief of Cuban counterintelligence, estimated the number of assassination schemes or actual attempts by the CIA under separate US administrations to be 38 under Dwight Eisenhower, 42 under John F. Kennedy, 72 under Lyndon B. Johnson, 184 under Richard Nixon, 64 under Jimmy Carter, 197 under Ronald Reagan, 16 under George H. W. Bush and 21 under Bill Clinton. Figures for other US presidents whom Fidel outlived are unavailable.

Evidently, immense good fortune, if not outright invincibility, runs in the family.