Home / WORLD / As Brexit begins to bite, BoJo dodges the bullets because of the vaccine rollout. He’s the luckiest PM ever

As Brexit begins to bite, BoJo dodges the bullets because of the vaccine rollout. He’s the luckiest PM ever 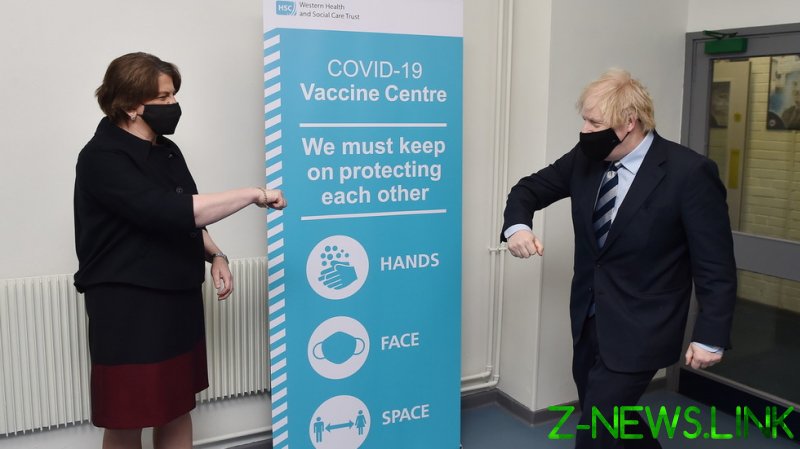 The news emerged on Friday that Britain’s exports to the European Union have dropped by 40 percent following the ratification of the Brexit deal at the start of the year. Imports from Europe have taken a hammering, too.

For most critics of the UK’s departure from the bloc, this will not come as a surprise. There have been widespread reports of added bureaucracy and red tape hammering businesses in the UK and reducing scope for exports from the continent. Although Britain has sought to try to plug the gap by looking around the world to make new trade deals, it’s obvious that few of them can replicate the geographic and economic advantages of trading with the EU.

Yet, despite this grim reading, Boris Johnson isn’t in political trouble. In fact, he’s landed on his feet, even if Britain itself has not. Despite having mishandled pretty much everything over the past year, bar the Covid-19 vaccine rollout, the prime minister has been as lucky as he has been clumsy.

The pace of vaccinations has alleviated public discontent over the virus, in contrast with the EU which is in a state of utter chaos with its programme. In addition, things at home are swinging in his favour, as he’s facing a Labour Party opposition which continues to be unpopular and in disarray, while short-term fears of a new Scottish independence referendum have been alleviated by the Alex Salmond/Nicola Sturgeon controversy which has damaged the SNP.

One of the fundamental arguments of Brexit was that the UK would be better off outside the EU, and could make better decisions under its own sovereignty than when trying to seek consensus with its continental counterparts. Like all debates, there were advantages and disadvantages to consider. The disadvantages have been quick to become apparent. UK trade is now suffering after being disconnected from the bloc’s common standards and procedures. British firms have been plagued by delays and there have been huge difficulties at ports. The decline in both imports and exports is no shock, either.

However, on the other side of the coin, Brexit supporters can make the argument that being outside the EU has given Britain a fundamental advantage on vaccine rollout. This has been a success in the UK with over 90 percent of over 60s having received a jab, whereas the EU’s disastrous procurement and distribution have meant that some countries are now facing yet another wave of Covid-19.

This has had immediate political repercussions, with a new survey finding that Covid has actively weakened the case for the EU. And so, Boris Johnson can claim a political victory, even if it’s a pyrrhic one. He doesn’t have egg on his face. The UK has paid a heavy price, but it will overcome Covid-19 before Europe.

And that, of course, should ensure BoJo will be domestically secure too. Labour has not been able to lay a decisive blow on the government over its general mishandling of Covid, and the pace of the vaccination rollout has ensured the period of ‘peak discontent’ against the virus is over, closing the opposition’s political space to capitalize on it.

This is bolstered by the fact that Keir Starmer is proving to be an uncharismatic and uninspiring leader of Labour, who is fast losing popularity and has not fixed the reputational problems of the party, but exacerbated them in an aggressive attempt to stamp out the legacy of Jeremy Corbyn. And so, Boris has remained ahead in the polls despite around 125,000 Covid deaths, an eye-watering decline in GDP, and mass unemployment.

Things have gone the Tories’ way north of the border, too. It’s often said a week is a long time in politics – something can look very definitive at one moment, and then circumstances can change in unexpected ways to uproot things completely. And that’s an apt way to describe the situation with the SNP right now. Buoyed by discontent over Brexit, it was powering ahead in polls for the Holyrood elections in May and had even secured a consistent lead in polls on Scottish independence. There were legitimate fears the end of the union was imminent.

But the fallout from the Alex Salmond inquiry has dealt a serious blow to the SNP’s credibility, and this is being reflected in the polls. Of course, things can change again come May, but Boris might find it easier now to simply deny the SNP another referendum. Choosing this route would certainly have the support of all the pro-union voices in Scotland.

In this case, Boris Johnson is not so much an astute political actor as the luckiest prime minister of modern times. Even when things have gone wrong, he has seemingly been able to avoid the consequences for them personally as the tide has turned in his favour. Britain is not in good shape, Brexit is hurting, but politically, is he going to pay the price for it? Not yet anyway.

He might be incompetent, but it just so happens that his key rivals and opponents are proving themselves to be equally incompetent or even more so. This is a scorched Earth victory; the Conservatives are dominating British politics by default. Rule Britannia!