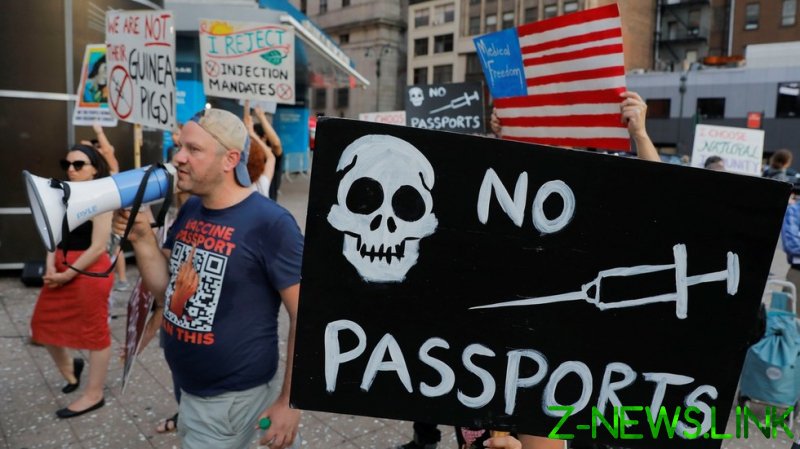 The poll, which was released on Sunday, found that 86% of Democrats have received at least one Covid-19 dose, while only 45% of Republicans have done so. A further 7% of Democrat respondents said they’re likely to be vaccinated against the virus, suggesting as many as 93% will eventually get the shots – but just 4% of unvaccinated GOP voters intend to be inoculated, so the Republican jab rate is tracking to top out at 49%.

Overall vaccine hesitancy is rising, which may help explain why President Joe Biden missed his goal of having 70% of US adults receive at least their first Covid-19 shot by July 4. Around 67% of American adults have taken at least one dose, meaning the Democrat president missed his goal by about eight million people, according to CDC data.

WaPo-ABC found that 29% of Americans said they aren’t likely to be vaccinated against Covid-19, up from 24% in April. Only 6% of Democrats fall into that category, while 47% of Republicans said they likely won’t be inoculated, including 38% who insisted that they definitely won’t be.

America’s vaccine recalcitrance isn’t driven by Republicans alone. Among independents, 35% of respondents said they are unlikely to be vaccinated, including 22% who definitely plan to abstain. Overall, 20% of respondents in every category said they definitely won’t get the jabs.

It also appears that being vaccinated against the virus correlates with support for Biden. About two in three vaccinated Americans approve of the president’s job performance, compared with one in three among those who haven’t been inoculated, the poll showed.

Variations in fearfulness also appear to affect vaccination decisions. While 69% of Americans overall said they believe they’re at low or no risk of contracting Covid-19, the confidence rate was lower among those who have already been inoculated. Just 22% of unvaccinated Americans think they’re at risk of getting sick from the virus, compared with 32% of vaccinated respondents, the poll found.

Participants were similarly divided on perceptions of how accurately government officials are reporting on the Delta variant of Covid-19. Among vaccinated Americans, 64% believe public health officials are accurately describing the variant, compared with just 18% of unvaccinated survey participants. The poll, which was conducted June 27-30, showed that 60% of unvaccinated Americans and 57% of Republicans believe the variant’s risks are being exaggerated.