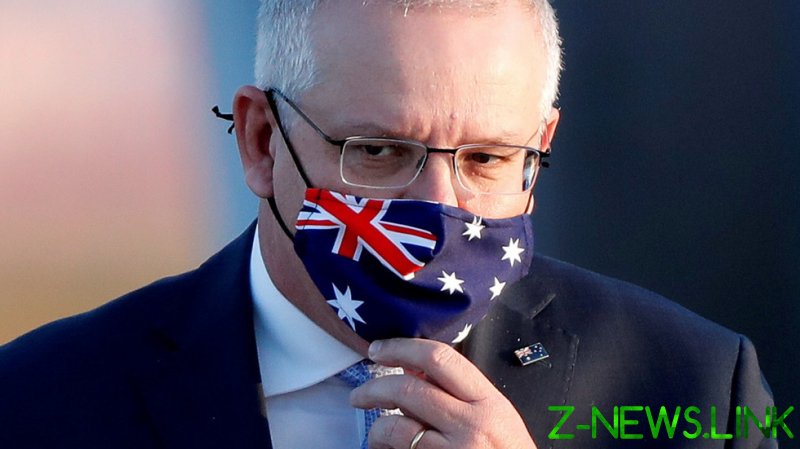 A couple of days later, Prime Minister Scott Morrison announced that his government would spend US$580 million on upgrading military bases in northern Australia. This was ‘not aimed at China’ he said –apparently with a straight face– it was simply designed to bolster Australia’s ties to America and “pursue peace.”

Beijing’s reaction to these developments has been swift and predictable: China’s Ministry for Foreign Affairs condemned Pezzullo as a “troublemaker” and his comments as “extremely irresponsible.”

Chinese Ambassador to Australia Cheng Jingye said in a speech last Thursday that Australia had “poisoned the atmosphere and damaged the foundation of bilateral ties.” He also warned that Australia could not expect Chinese tourists to flock to Australia when the Covid-19 bans on international travel were lifted. That’s while, in 2019 alone some 1.5 million Chinese tourists visited Australia, spending $12.4 billion – one third of the total amount spent by foreign tourists. Chinese tourists comprised the majority of visitors to The Gold Coast and Far North Queensland – two of Australia’s most popular tourist destinations.

Meanwhile, Australian wine exports to China have dried up after the imposition of tariffs late last year. According to Wine Australia, exports to China for the December 2020 to March 2021 period were just $12 million compared to $325 million in the same period a year ago.

Recent developments in the higher education field are also of concern. In 2019, there were some 160,000 full-fee-paying Chinese students studying at universities in Australia – making up the biggest share of international students, and pouring over $10 billion a year into university coffers.

Since earlier this year, however, the Chinese Ministry of Culture has been discouraging Chinese students from resuming their studies in Australia – on the grounds of alleged Australian racism, and the poor quality of courses offered at Australian universities (an accusation that many would say is undoubtedly correct).

Morrison appears to believe that by provoking China he can divert attention away from these domestic political debacles. Former prime minister and China expert, Kevin Rudd, reportedly said last week that “Morrison and company are addicted to the drug of ‘standing up to China’.”

The fact that a federal election has to be held within the next twelve months is also perhaps a relevant consideration – the thought of a khaki election must be tempting for Morrison, especially given the Labor Party’s refusal to seriously condemn his stance on China.

Even more disturbing, however, is Morrison’s recent detailed espousal of his crude Pentecostal religious beliefs. At an address to the Australian Christian Conference, Morrison revealed he practiced “the laying on of hands.”  He said he believed that God personally sent him “signs,” was responsible for his election victory in 2019 and that he was “called to do God’s work” as Australia’s leader.

A video of Morrison’s address was leaked to the media, and he has tried to explain it away – but what he said to his fellow happy clappers is perfectly clear.

Morrison’s address provoked the only sensible comment that opposition Labor leader Anthony Albanese has made for some time, namely “the idea that God is on any political side is no more respectful than the idea that when someone’s sporting team wins it is because of some divine intervention.”

In an article published in The Guardian, former Prime Minister Rudd was more critical of Morrison, describing his views as “disturbing for our secular democracy” and “undermining the role of reason….. in faith.” Rudd, understandably, found it “worrying if the Prime Minister believes God somehow speaks to him directly.”

In fact, it is extremely dangerous for any politician – particularly a mediocre one like Morrison – to believe that his views and actions (especially in respect of war) are divinely sanctioned. Tony Blair who prayed to God prior to sending troops to Iraq provides a recent example of the disastrous consequences that can flow from such circumstances.

It is to be hoped that Morrison does not really believe that, if war with China does break out, God will suddenly appear on the frontlines, eager to lead the Australian troops into battle.

Having said that, the Australian military could probably use all the celestial assistance it can get – given that its capability now is probably no better than it was in 1977, when then Defence Minister Jim Killen famously said that our defence forces “couldn’t defend Botany Bay on a sunny Sunday afternoon.”

Morrison also seems to have forgotten that, only late last year, it was his own government – in particular the bungling Defence Minister Linda Reynolds and the dolt-like Chief of the Defence Force, Angus Campbell – that destroyed the morale of Australia’s armed forces, by mishandling the Brereton Report into alleged atrocities perpetrated by Australian troops in Afghanistan.

More fundamentally, Morrison lacks the intellectual and moral courage to act independently of America in respect of China – as does Albanese and the Labor Party. (It takes a politician of rare courage to publicly oppose America on an important foreign policy issue – as opposition Labor leader Mark Latham infamously did in 2004 over George W Bush’s Iraq war).

Much the same can be said of the Australian media. Right-wing commentators have foolishly criticised Morrison and Dutton for not being tough enough on China, while so-called left-wing media organisations have shown little or no interest in the issue at all.

It appears that the China crisis can only intensify – but, if God really is on our side, perhaps there won’t be a new war.