Home / WORLD / As an Englishman living in Scotland, I’ve seen the anti-English hatred that’s being stoked up by Scottish nationalists

As an Englishman living in Scotland, I’ve seen the anti-English hatred that’s being stoked up by Scottish nationalists 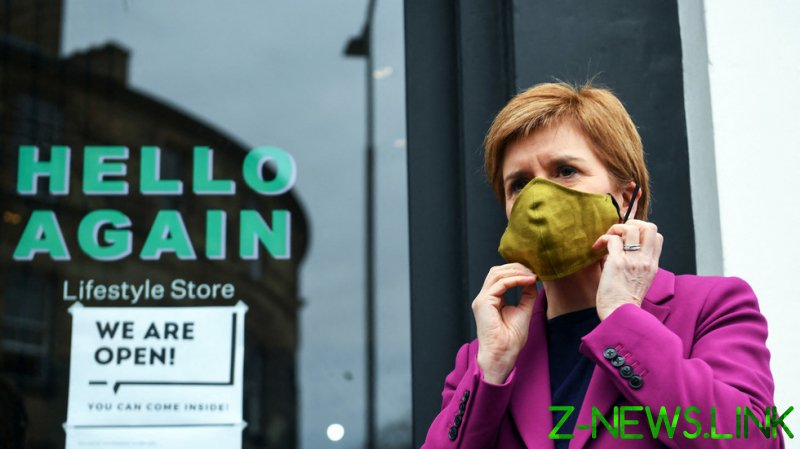 This week, Scotland’s first minister and SNP leader Nicola Sturgeon again attracted headlines for basically telling English people not to come to Scotland for fear of spreading Covid. While Sturgeon would no doubt pass this off as a sensible measure to combat the pandemic, the reality is that a latent and divisive anti-English sentiment underpins the SNP’s core message in favour of independence.

In a coronavirus briefing on Tuesday, Sturgeon said: “From Monday for a period until the middle of May actually there will be more hospitality open in Scotland than in England because there will be some indoor opening – albeit very restricted – that’s not the case yet in England. So again if people are coming north across the border, you know, don’t sort of crowd into places – you shouldn’t be allowed to crowd into places indoors – but don’t come specifically to sort of escape the rules in your own area.”

But Covid cases, hospitalisations and deaths are now down to a trickle in comparison to just three months ago. In early January, reported deaths in Scotland were running at over 90 per day. But there has been no day with double-digit deaths since the end of March and they are now closer to two per day. In the area I live in, the Scottish Borders, there were no cases of Covid at all reported on April 22 – and that’s not the first day that has been the case. Where once there might have been some justification for us to be told to stay in our own area, that clearly doesn’t apply now.

And, despite the SNP’s best efforts, we still live in a common country, the United Kingdom. So Sturgeon has absolutely no business telling English people not to pop across the border. Not that the new rules coming in on Monday April 26 are exactly a compelling reason to do so. Scottish drinkers will finally be able to go to a pub, if they’re willing to sit outside, two weeks later than their English counterparts. (Having tried this in my own garden last night with my wife and a neighbour, this was only feasible with multiple layers of clothing and even blankets!)

Where Scotland’s rules differ very slightly is that we’ll be able to sit inside until 8pm – just as long as we don’t want anything alcoholic. The puritan streak of Scotland’s rule-makers is alive and well. Why would anyone go to the trouble of travelling north to “crowd into places” for a meal and a cup of tea?

The notion that English hordes are waiting at the border to spread the plague north again is simply illustrative of the SNP government’s mindset. But the demand for independence is built on defining Scotland as different to England: It’s ‘Tory England’ that is holding Scotland back. If only Scotland were ‘free’, we could live in a social-democratic paradise, more like Scandinavia, than the cruel, market-driven society down south.

Small wonder that this outlook naturally lends itself to a degree of anti-English sentiment in the party towards their ‘oppressors’, whose accents allow them to be easily identified. Or not – one resident took to Twitter after Sturgeon’s edict, to moan: “I am a Scot, however I speak ‘The Queen’s English’. Living in Stirling, a hotbed of Nationalism, I can’t tell you how much verbal abuse I receive when I so much as speak. Scotland is no longer a pleasant place, even for a Scot, to live.”

Such anti-English attitudes are by no means commonplace. Most Scots couldn’t care less where you are from. While I was born and bred in Birmingham, I’ve personally experienced very little anti-English feeling and even that was mostly just banter. In my experience, intra-Scottish rivalries generate more heat. I’ve heard Glaswegians refer to people in Edinburgh as ‘stuck up’, while some narrow-minded Edinburgh types refer to ‘Weegies’ as ‘soap-dodgers’. But this kind of thing is marginal and, again, mostly in jest.

But while explicit anti-English feeling is uncommon, that didn’t stop a few numpties protesting at the border last July against English people travelling north – at a time when Covid restrictions had been greatly scaled back. The message was ‘Keep Scotland Covid free’ – as if England were overrun by disease and the drawbridge had to be pulled up. Even Sturgeon balked at that – though it took a day or two for her to criticise it.

But the underlying anti-English message is nationalist myth-making. Scotland is not some poor oppressed colony. Just seven years ago, Scotland voted clearly – in a supposedly ‘once in a generation’ vote – to stay part of the UK. Public spending in Scotland is higher, per capita, than in England. In 2018-19, public spending per head in England was £9,296, but it was £11,242 in Scotland, helped by taxes raised north and south of the border.

Moreover, what is done with that money is overwhelmingly determined in Edinburgh, not London, particularly in the areas that voters tend to see as a priority. As the Scottish government’s own website notes: “The Scottish Government runs the country in relation to matters that are devolved from Westminster. This includes: the economy, education, health, justice, rural affairs, housing, environment, equal opportunities, consumer advocacy and advice, transport and taxation.”

Unfortunately, the SNP government has been a failure on many of those fronts during its 14 years in power. But this is always blamed on Westminster, not on the many failings of Sturgeon & co. It has always been in the SNP’s interests to keep the debate about independence at the forefront of Scottish politics by blaming Boris Johnson and his predecessors for Scotland’s woes, rather than admit that they’ve been pretty useless themselves. So while the SNP loves to talk about its inclusive and cuddly ‘civic nationalism’, the underlying message is ‘Blame England’.

The SNP isn’t even that interested in independence, really. It would love Scotland to be a part of the EU once more. It would be happy to have rules imposed by Brussels once again. That’s not self-determination – that’s ‘Anyone but Westminster’, or ‘Anyone so long as they’re not English’.

The SNP is almost certain to be re-elected in May’s Scottish Parliament elections, quite possibly with a majority this time around. (For the past five years, it has been a minority administration propped up by the Greens.) With Alex Salmond’s Alba party trying to skew the electoral system to create a ‘pro-independence super-majority’ in Holyrood, the demands for independence may get louder still, despite the fact that opinion polls on the matter have been split down the middle for years.

And if pro-independence parties are in the ascendant, the ‘Blame England’ message is going to be pushed ever harder – with every possibility that this will be converted into greater anti-English sentiment.