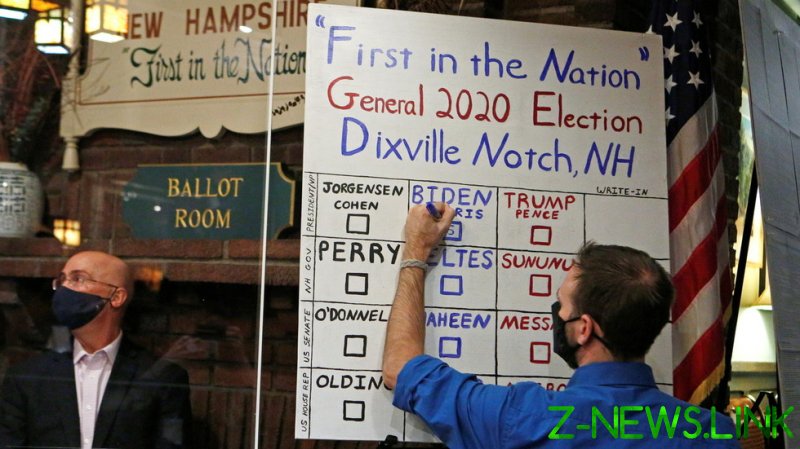 The New Hampshire hamlets of Dixville Notch and Millsfield both open their polling locations at midnight, and announce their results before anywhere else in the US.

In the early hours of Tuesday morning, Dixville Notch announced a landslide win for Joe Biden, with the Democrat taking all five of the community’s votes. Fifteen miles away in Millsfield, Donald Trump scored a convincing victory, taking 16 votes to Biden’s five.

Nothing about these results was surprising. Dixville Notch voted 4-2 for Hillary Clinton in 2016, while Millsfield voted for Trump by 16 votes to four that year. Millsfield is located inside a deep red district, but New Hampshire as a whole is trending toward Biden, if the polls are to be believed. The most recent surveys put the former vice president between eight and 10 points ahead in a state that Hillary Clinton managed to scrape a 0.3 point win out of in 2016.

America’s first 26 election-day votes set off a storm of argument online. Democrats and liberals touted Biden’s flawless victory in Dixville Notch as a sign of things to come, and the media wrote up headlines on his five-point win.

Republicans and Trump supporters countered with their own success story, and attacked the American media for focusing on Dixville Notch.

Outraged liberals slammed the “white” electorate of Millsfield for voting Trump, and began crossing the tiny township off their imaginary travel itineraries.

Twenty-six votes is a drop in the ocean compared to the nearly 100 million early votes cast so far nationwide. However, the online squabbling over the first New Hampshire tallies is likely a neat microcosm of what will follow across the country on Tuesday.

By calling races, the media wields enormous influence over the final result. Fox News’ decision to call Florida for George W. Bush in 2000, for example, is widely considered to be the final nail in the coffin of Al Gore’s presidential bid, even though Bush was behind at the time. As the day wears on, Trump’s supporters – already distrustful of the media – will likely continue to ream liberal-leaning news outlets for covering the Dixville Notches of the country and not the Millsfields.

And, as the results come in, both sides will surely abuse and attack each other online. The climate of hostility surrounding this year’s election has led business owners in America’s largest cities to board up their storefronts in anticipation of post-election violence. A number of groups, among them Black Lives Matter and various ‘Antifa’ organizations, have promised to take to the streets if Donald Trump is re-elected.