Home / WORLD / As Afghanistan finger-pointing begins, Biden blames Trump and US intelligence say ‘no one listened’ to their warnings

As Afghanistan finger-pointing begins, Biden blames Trump and US intelligence say ‘no one listened’ to their warnings 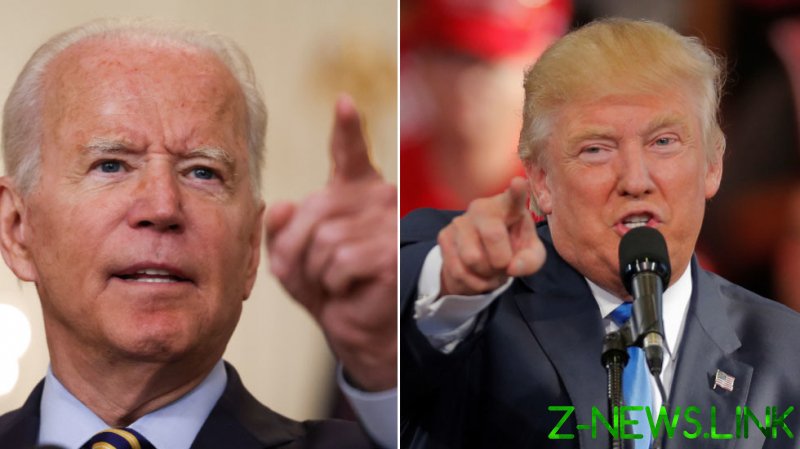 The Biden administration has been wrong on just about every aspect of the US’ final departure from Afghanistan. Just last month, Biden himself described the Afghan National Army – funded by the US to the tune of $88 billion – as capable of defeating the Taliban, and “as well-equipped as any army in the world.” That same army crumbled as the Taliban seized control of the entire country less than two weeks after claiming its first city.

Biden said that the US-backed President Ashraf Ghani and his ministers “clearly have the capacity to sustain the government in place,” but Ghani abruptly fled Kabul on Sunday, leaving the presidential palace to the Taliban. He insisted that under “no circumstance” would Americans have to be airlifted from the roof of the US Embassy to the airport (as happened during the fall of Saigon at the tail end of the Vietnam War), yet to many, the scenes that unfolded on Sunday were strikingly similar.

Biden’s military sang the same song. General Mark Milley, chairman of the Joint Chiefs of Staff, stated last month that a Taliban victory in Afghanistan was “not a foregone conclusion,” and the intelligence community was apparently caught with its pants down too, having reportedly given the Taliban between six and 18 months to take over the country, then tightening that timeline to a still-generous 30-90 days, per multiple media reports.

So whose fault is it? With some Americans still on the ground in Kabul and the State Department apparently unable or unwilling to help them, officials in Washington have started to point fingers. First up was Biden, or whoever writes his official statements. In a release on Saturday, Biden blamed former president Donald Trump for cutting a peace deal with the Taliban last year that left the militants “in the strongest position militarily since 2001.”

Biden was slated online for passing the buck to Trump, as he boasted during his campaign that “unlike this president, I’ll do my job and take responsibility. I won’t blame others.”

Biden told reporters last month that the US’ intelligence agencies hadn’t predicted the collapse of the Afghan government. However, spokespeople for these agencies came out to correct the record on Monday. An anonymous source in Congress told ABC News that the intelligence agencies had been predicting “a swift and total victory” by the Taliban, and that the Biden administration had “disregarded” this information. Former acting CIA director Michael Morell blamed the executive branch for the failure in Afghanistan, tweeting on Sunday that “of all the players over the years, the intelligence community by far has seen the situation in Afghanistan most accurately.”

Yet every intelligence community assessment that leaked out gave Kabul months, not days, to hold out against the Taliban. Morell and his ilk may be engaged in some post hoc face-saving, but the administration isn’t around to take them to task over it. Biden himself remains cloistered away in the presidential retreat of Camp David and after a weekend of silence is set to address the nation on Monday afternoon. Vice President Kamala Harris has also remained shtum, while Press Secretary Jen Psaki chose Sunday to take a week’s vacation.

Tragic scenes from Kabul airport – where hordes of Afghans clung to American planes as they left the tarmac on Sunday – have been used by Republicans to bash Biden, and Trump’s supporters have claimed that such chaos would never have unfolded under his leadership.

However, that idea is largely fanciful, and the stuff of speculation. Taliban leadership could well have deemed Trump too unpredictable, and held back to avoid angering the man who once dropped the ‘Mother of All Bombs’ on Islamic State militants and threatened to rain “fire and fury” on North Korea, but they could just as easily have called his bluff and pressed into Kabul. Either way, droves of Afghans would likely have mobbed the airport regardless, seeing the chance of a seat on an American plane as preferable to life under Taliban rule.

In reality, the withdrawal was likely always going to be chaotic. At every moment of its two-decade war and occupation, the United States prosecuted its mission with extreme incompetence and mind-blowing waste. Spending $88 billion on an army that surrendered instantly to the Taliban is just the latest example. A trove of Pentagon documents released in 2019 revealed that US officials routinely misled the public on the war, as incompetence reigned behind the scenes.

Military brass and political leaders in Washington often didn’t know who the enemy in Afghanistan was, couldn’t tell commanders on the ground what to do, had nobody who could speak certain Afghan languages, got ripped off by locals and wasted billions of dollars on pointless infrastructure projects, and hired warlords for security, who promptly attacked Americans to justify more funding for security, among a litany of other failures.

Given the bungling and waste involved in staying in Afghanistan, a disorganized retreat from Kabul is likely the best outcome any US administration could have hoped for. Yet even as the political players in Washington ramp up the blame game, the chances of any general, adviser, policy wonk, or intelligence chief facing serious consequences for promoting and overseeing the failed two-decade war are extremely slim.