Home / photo report / As a last farewell of the king of Thailand. Photo

As a last farewell of the king of Thailand. Photo 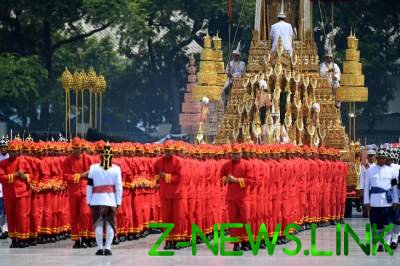 The procession spent a record amount.

In Thailand are the real Royal funeral — a five-day farewell to the deceased king of Thailand Phumiphon Adulyadet (Rama IX), who ruled 70 years. It all started on Thursday with the Buddhist ceremony of reading the mantras in the throne hall of Dusit Maha Prasat Grand Palace in Bangkok.

During the reign of King Rama IX, Thailand, from a largely agrarian society became the second largest economy in Southeast Asia. In Thailand implemented more than 4,000 Royal projects aimed at the development of the economy and human resources.

1. This is the Royal crematorium in Sanam Luang is built exclusively for the solemn funeral Ceremony of King Rama IX. It is decorated with statues of deities and mythical creatures, and the Royal crematorium symbolizes mount Sumeru, the center of the Universe according to Buddhist cosmology. After a five-day funeral this masterpiece crematorium will simply be demolished. (Photo Kittinun Rodsupan): 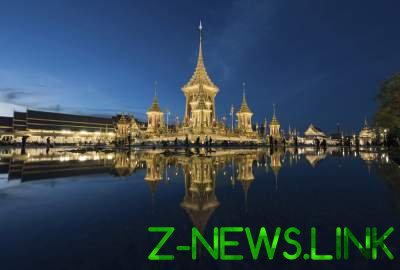 2. Thousands of people in black waiting for the start of the funeral ceremony, October 26, 2017. The ceremony will be held in strict accordance with the traditions of Buddhism, Hinduism and Brahmanism. (Photo By Christopher Furlong): 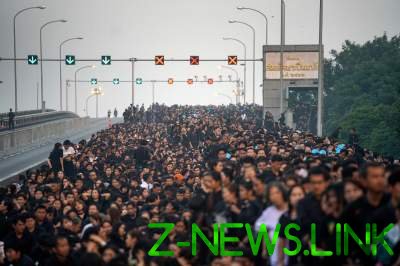 Officials said that according to preliminary calculations, the cost of the burial ceremony of King of Thailand Adulyadej of Pumipon will be 500 million baht. If necessary, the budget can be increased 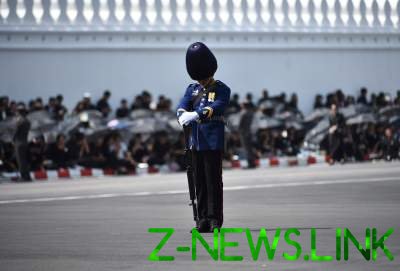 Five-day farewell to the deceased king of Thailand Phumiphon Adulyadet (Rama IX) began on Thursday with the Buddhist ceremony of reading the mantras in the throne hall of Dusit Maha Prasat Grand Palace in Bangkok. 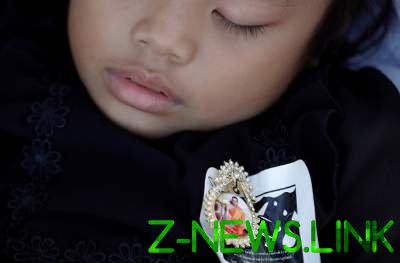 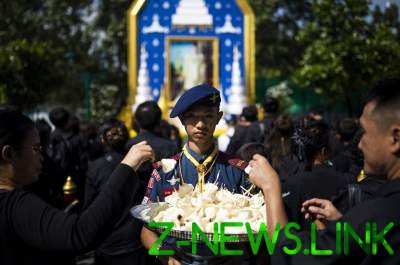 6. Men in black, some smiling, with pictures of the king, October 26, 2017. By the way, the rule of Pumipon Adulyadej is one of the longest in world history. (Photo By Christopher Furlong): 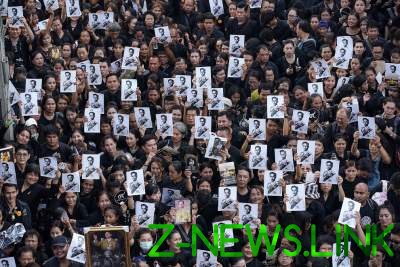 7. The weather has tested people. (Photo By Ye Aung Thu): 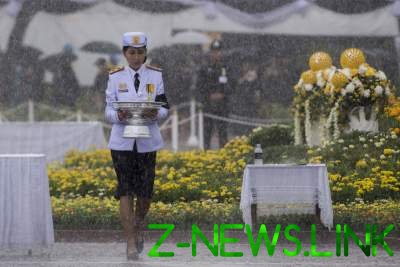 8. Cremation of the monarch was preceded by hours-long funeral procession in which the coffin the urn with the body of the king was delivered to the area of Sanam Luang. Thailand, October 26, 2017. (Photo By Soe Zeya Tun | Reuters): 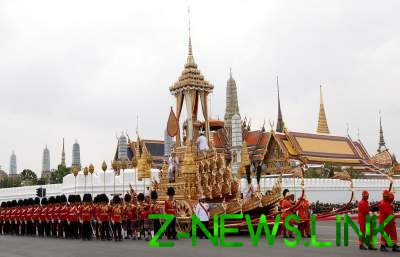 9. Royal guard at Grand Palace. Here, on top of the built burial scaffold will be erected sepulchral urn. (Photo By Damir Sagolj | Reuters): 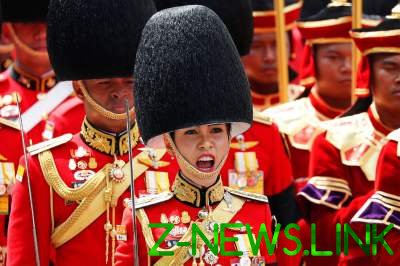 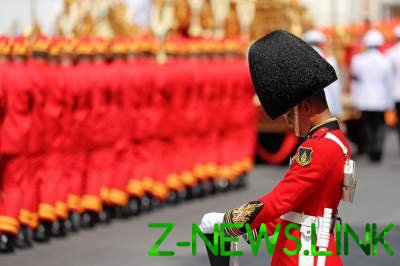 11. The Royal physician. In General, not just the weather I feel the strength of the people who came to see the beloved monarch: thousands sought medical help from the doctors-volunteers throughout the day on Thursday night and Friday morning. (Photo By Anthony Wallace):

12. Guard — the elite and the pride of the army. In the battle she rescued the troops in the hottest areas, and in time of peace her beautiful form and impeccable bearing serves as an example to other soldiers. But the guards of the king of Thailand appeared in 1859 as a special service to… scare crows in the Royal court. Today Thai guards, hosts an annual spectacle for tourists and are an important part of military tradition in the country. (Photo By Soe Zeya Tun | Reuters): 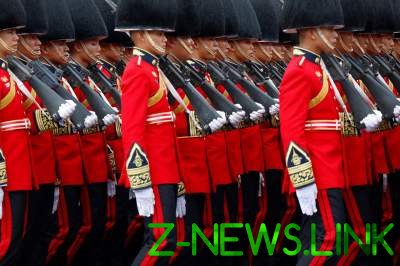 13. All the colors and elements of the guards form a very well thought out. Bright red and white uniforms serve personal bodyguards of the king of Thailand, in the form of a yellow dressed gunners, and the fabric is heavenly hue is used to sew the shape of the guards of the air force. (Photo By Soe Zeya Tun | Reuters): 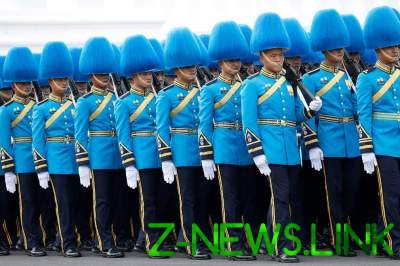 14. And this is the new king of Thailand Maha Vajiralongkorn, he is the only son of the late ruler of Pumipon Adulyadej. (Photo By Damir Sagolj | Reuters): 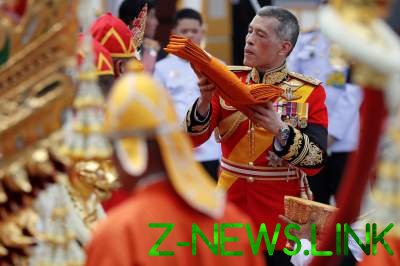 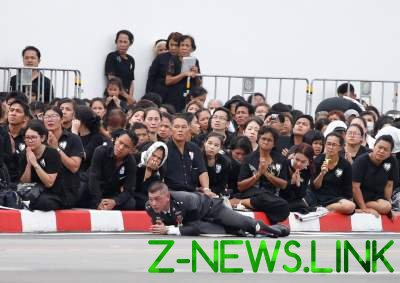 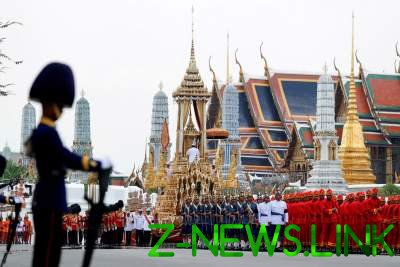 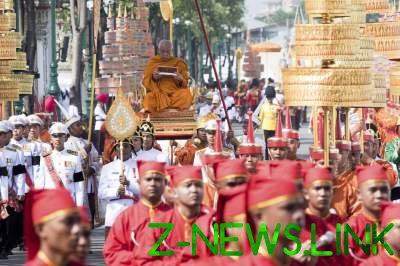 18. High caps borrowed from the British guards, but instead of bear skins Thais use feathers: after all, the climate is different. (Photo By Anthony Wallace): 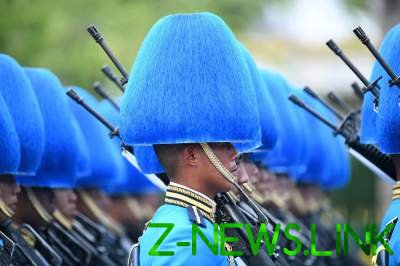 19. The Royal chariot Phra Maha Pichai Ratchet, or “the Great victory”, was built in 1795 for the funeral of the father of Rama I. Since then, in his last journey on it went almost all Thai leaders, and most revered members of the Royal family. (Photo By Damir Sagolj | Reuters): 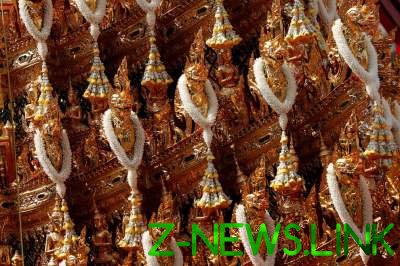 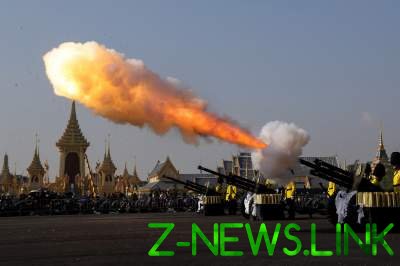 23. Sepulchral urn of sandalwood. It consists of 30 thousand hand-cut elements and decorated primarily with images of birds Garuda, which is believed to be the soul of the monarch will make his final journey to the summit of the sacred mountain. (Photo Roberto Schmidt): 24. The sepulchral urn was placed the body of the deceased in a metal sarcophagus, which was made cremation without an open flame. The ballot box remained intact. (Photo By Wason Wanichakorn): 26. The Royal crematorium near the Grand Palace in Bangkok, October 26, 2017. (Photo By Athit Perawongmetha | Reuters):