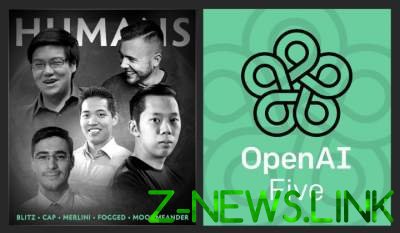 After the victory of Musk on Twitter congratulated the team OpenAI.

Artificial intelligence has taken another step forward. The team of bots developed by Elon musk (Elon Musk) OpenAI, in the match won the team of commentators and former professional players in Dota 2. The battle ended with the score 2:1.

The first two games bots won without any problems. Perhaps the score would have been a “dry”, if the developers decided to give in and didn’t let viewers on Twitch to select the characters for commands bots in the last match: Slark, Sven, Axe, Riki and Queen of Pain. AI predicted that his chance of victory with this set of characters is equal to 2.9% and was right, after losing the third game in 35 minutes. It is noteworthy that bots often used phrase from the chat wheel, and also wrote barbs in the side of the opponents.

See also:  World of Warcraft became the first game on Windows 7 with support for DirectX 12

Note that in these matches, a choice was available to only 18 characters, it was impossible to summon minions and illusions to use scan. Items Divine Rapier and Bottle also were forbidden to buy. In addition, the response time of bots has increased from 80 to 200 milliseconds, so that the AI does not look quite so “cheat” and had not used the ability almost instantly.

In the near future, the developers plan to improve their creation and the beginning of the world championship for Dota 2 to provide a bot that can beat five professionals participating at this tournament.

By the way, the The International 2018 kicks off next week. 15-18 Aug pass the group stage. The main phase of the battle for the Aegis of Champions will be held in Canada, Vancouver Rogers-arena — from 20 to 25 August. 18 best teams from around the world will compete for an impressive cash prize and a trophy in the form of artifact Aegis of the Immortal (“aegis of immortality”). On TI8 honour of the CIS region will defend the teams Virtus.pro and FTM.Winstrike and Ukrainian Roman Resolut1on Fomenok, who plays for the American team VGJ.Storm managed to qualify for this tournament through the open qualifiers.

See also:  In the network appeared the cinematic trailer for Assassin's Creed: Origins

The size of the prize Fund of the championship on Dota 2 this year with high probability will again be a record. At the time of writing it stood at $23.5 million